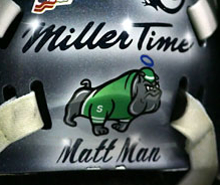 Ryan Miller typically has "Miller Time" on his helmet, and "Matt Man", a tribute to his cousin, Matt Schoals, who died at the age of 18 in 2007 from complications of a bone marrow transplant to treat leukemia.(Christian Petersen/Getty Images)

EDIT: I can't believe I did this, but I forgot to include a link to the Steadfast Foundation. It's here.

Just before the 2010 Winter Olympics were to start, Ryan Miller was upset. It wasn't so much the "Miller Time" slogan on the back of his mask, but rather "Matt Man" -- a tribute to Miller's cousin, Matt Schoals. When this happened, Miller protested. "I’ll contest," Miller said ..."My aunt and uncle and my family, it’s important to them. It’s important to me. I’m going to stand up for that."

In 2006 Schoals, then a 16-year-old living ten miles north of East Lansing, was diagnosed with Acute Lymphoblastic Leukemia (ALL), a cancer of the white blood cells which strikes 1 in 50,000 people per year. Treatment often involves a bone marrow transplant; sadly Matt died due to complications in that transplant surgery in 2007. He was one week away from his 18th birthday.

While Matt was battling ALL, Ryan and his father Dean Miller established the Steadfast Foundation. Its purpose, according to its website, is to "provide patients and their families support to help develop and maintain positive attitudes and help nurture an environment conducive to effectively battling the disease and dealing with challenging circumstances with as little pain as possible."

In the end, Miller's insistance to keep the tribute held up. He went on to lead the U.S. to the gold medal game, posting a 1.25 goals against average on the way and was voted the tournament's most valuable player. That wasn't the only award Miller won that year -- he won the Vezina trophy as the NHL's top goaltender, and also won the NHL Foundation Player Award given to the player "who applies the core values of ice hockey—commitment, perseverance and teamwork—to enrich the lives of people in his community". He was the first American player ever to win the award.

To this day, Miller still keeps the "Matt Man" tribute on his mask. In its five years of existence, the Steadfast Foundation has raised more than $500,000 for cancer patients in Buffalo, New York. He's been a credit not only to Buffalo, but to Michigan State as well.

To see the rest of the Buick Human Highlight Reel, and even share a story of your own, go to ncaa.com/buick. This post is sponsored by Buick.