To repeat something I've now written probably a half dozen times since the loss to Butler in March, a 2011 MSU basketball season that ends short of the program's third national championship will not necessarily be a failure, but it will be a disappointment.  There's only one way to beat back-to-back conference championships and Final Four appearances.

You can't finish much more short of a national title than a first round tournament loss (although MSU came perilously close to not even getting that close).

So, yeah, disappointment.  Of the utter variety.

What went wrong?  Well, just about everything.  The team regressed in nearly every area of its tempo-free profile: 2-point shooting (5 full percentage points there), offensive rebounding, free throw rate, three-point defense (3.5 percentage points), defensive turnover percentage, defensive rebounding, and defensive free throw rate.  Even in areas where the numbers improved slightly, there were stretches of sustained frustration during the season: turnover percentage and three-point shooting.

The numbers are skewed slightly by the brutalness of the schedule.  MSU somehow actually ranks one spot higher than last season in adjusted defensive efficiency.  On offense, it's not even close: down 34 spots.  Those rankings are based on averages, though.  Over the course of the season, the team rode a rollercoaster of inefficiency: failing to hit an offensive efficiency mark of even 90 against two nonconference foes, going through a stretch of six Big Ten games in which all but one opponent hit the 110 offensive efficiency threshold, and then--even as the team found some defensive identity--falling short of the 100 mark on offense in five of the team's last six regular season games.

In conference play, the team's performance fluctuated from mediocre to dismal to merely average: 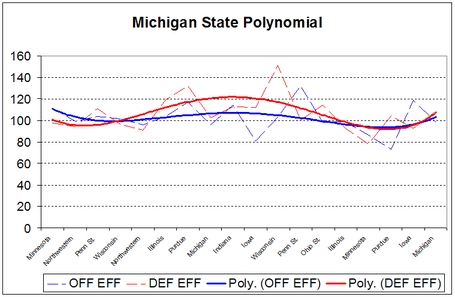 I don't think there's much point dissecting every factor contributing to the team's underperformance over the course of the season, but here's a quick overview: There were pre-existing issues and external shocks--a star player coming off a major injury, the dismissal of a key back-up, and recurring health issues for the two key interior guys.  There were mental obstacles--Nix going AWOL early on and Summers' seemingly season-long struggle to find his confidence.  And there was just a flat out lack of development--only five of the 11 guys on the team's KenPom page finished the year with an offensive rating above 100.

A coach renowned for his ability to break a team down and then rebuild into something bigger than the sum of its parts was left at season's end with two offensive playmakers, two solid defenders, and . . . not much else.  It's hard to say how much of the blame lies with Tom Izzo (although he's certainly taken responsibility for all of it).  The only decision I think you can clearly criticize is not giving the young bigs more regular opportunities as the season progressed.  But I really don't think any of the three was going to emerge as a go-to difference maker this season regardless.

If you want to revel further in the misery of this season, there's plenty to revel in in the site's archives.  (And you can add every aftermisery thread and game recap following the team's 15 losses to that series of hyperlinks.)  I, for one, am ready to close the books on this one.

Compared to the peak we had all hoped to climb, this season instead represented a distinct valley.  But, as has been noted previously, it's pretty amazing how high the lowest moments are under Tom Izzo's watch.  And this program has bounced back pretty quickly from the valleys in the past.

Looking forward to next season, expectations should be much reduced, but some real promise exists.  The team will return three of five starters--although two of those guys are defensive specialists (at least based on their careers to date).  This will be Draymond Green's team for his senior season.

In terms of the pieces that are coming and going, the team will add six new players (including the two redshirts from this season) to replace just three guys.  Two of the departures--one major talent who just couldn't make it happen this year and one former walk-on who squeezed quite a bit out of his limited talent--should be relatively easy to replace.  The third departure, not so much.  Kalin Lucas leaves behind a major hole as the team's primary ball-handler and go-to scorer.

Here's a (very) tentative depth chart for next season:

There should be spirited competition as 13 guys compete for 9 or 10 spots in the regular rotation, with only the positions of Appling, Green, and Delvon Roe assured.  If Keith Appling can make the major progression freshmen often do when they become sophomores, Travis Trice can play the point competently for 10-20 minutes per game, and at least one of Branden Dawson, Brandan Kearney, or Dwaun Anderson can give the team a credible scoring threat from the wing, this will be a fairly well-rounded team.  Russell Byrd will hopefully give the team the pure outside shooting threat it lacked this season, and Alex Gauna will append another skillset (bulk plus perimeter shooting) to the current three-headed back-up big man monster.

The Big Ten looks to be down quite a bit next season.  Root for Ohio State to win the national title so Jared Sullinger and William Buford have nothing left to come back for next season.  Purdue and Wisconsin both lose major components (Johnson/Moore, Leuer/Nankivil).  That's even more true for Illinois and Penn State.  On paper, Michigan may actually be the preseason conference favorite, with the entire lineup returning for a team KenPom pegs as the 23rd best in the country right now.

MSU may not compete for the Big Ten title, but the team could realistically finish well into the upper division.  It's been a tenet of my blogging about MSU basketball that depth is the overriding key for Tom Izzo-coached teams to be successful.  This season's team didn't have it (conference-only depth ratio: 3.52; and that'd be higher [worse] if you factored Lucious' minutes out).  While there will be a lot of new faces next season, those new faces will create the opportunity to build depth and perhaps make this rebuilding phase a brief one.