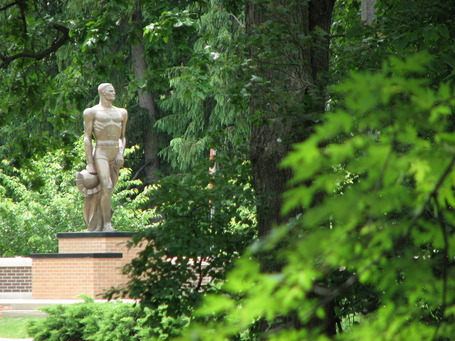 To me, the sports blog has two great advantages over other mediums.  First, a good blog post can examine the performance of a given sports team at a level of depth beyond the casual analysis found in most corners.  Second, a blog can collect a community of fans that exchange ideas, memories, and emotions in a quantity that less obsessive types would find tiresome.  In short: sports blogs are for sports fan(atic)s in the original sense of the term.

Many mainstream sportswriters do, of course, have unique insights to offer, but generally people in those positions are writing for a broader audience not interested in much more than cursory explanations for what transpired on the court/field/ice the night before.  (Notice how all of Joe Rexrode's really interesting observations are on his blog, rather than in his newspaper articles.)  And message boards can serve a useful function in terms of information exchange, but the dialogue there tends to lack focus.  (The top-ranked Spartan message board would be Exhibit A of that phenomenon.  Random thread title on the front page there as I write this post: "Why haven't there been any REALLY good movies about Napoleon?")  Finally, sports talk radio is, well, what it's advertised to be: a lot of talk.

When I started blogging about Michigan State basketball three and a half years ago, the goal, which seemed pretty enormous at the time, was to bring those two elements together: in-depth analysis and a spirited community for the fanatics.  Slowly but surely, we got there.  And, in the process, I'm quite certain I've gotten a lot more out of this than I've put in.  I've learned a ton, made some real, live friends, and become even more fanatical about the Green and White.  (I didn't used to go to every football game, believe it or not.)  You, gentle readers (and even you not-so-gentle readers), have been what's made this site and the one that preceded it much more than mere repositories for my scribblings and scatterplots.

Meanwhile, in a period of time shorter than a single presidential term, tempo-free stats have somehow gone mainstream.  (Did you notice how CBS was showing 2-point shooting numbers during yesterday games?)  In the terminology of Mr. Gasaway, more and more people are basing their views regarding basketball performance on, like, reality.  It's been fun playing a (very) small role in that development.

(Aside: Now that we've got a consensus on the way to determine why a team has or has not been successful, it seems like the next step is finding ways to identify how a team can become more successful.  You can see the first steps in that direction in the analysis of specialty data and UFRish Xs-and-Os breakdown featured in Luke Winn's work--with a couple local bloggers following suit.  This is where basketball still trails baseball in the level of utility advanced statistics bring to the table.  The more I've learned about college basketball, the more I feel like there's that much more I don't understand.  Not that that's entirely a bad thing.  It may be that the magic of the game that crops up each March lies in those very vagaries.)

For reasons previously articulated, the time has come for me to step aside.  Before I do, please allow me my moment at the Oscars (sans the orchestra).

Building a blog is inherently a network-based endeavor, and the list of people who have helped me out along the way is too long to publish in its entirety.  But I do want to publicly thank a few people in particular:

The folks at SB Nation have been great--Peter Bean and Joel Hollingsworth, in particular.  This platform has allowed me to write for the last couple years without having to worry about all the techie stuff.  (I still remember staying up until like 3 in the morning one night when the old site was temporarily redirecting to a very sketchy-looking website based somewhere in Southeast Asia because of a random glitch in the works at the server company.)

And I couldn't have lasted this long in the blogosphere without Pete and LVS (whom I roped into this against his better judgment) agreeing to start TOC with me two years ago.  And Josh, Tim, Dan, and Patrick signing on over the last year has made the experience that much richer.  I've always said that if there were a high-quality MSU sports blog out there for me to read, I'd quit.  Now there is, and I am.

Finally, my wife and kids are owed a big thank you.  They've spent far too much time waiting for Dad to get done with whatever it is he's doing on the laptop.  Luckily, they all just happen to bleed green, so they've been willing to overlook it.  (On that note, my green blood was passed down to me by my parents, who have been a source of great encouragement in this endeavor, and many others, and have made much of the MSU-based traveling over the last several years possible.)

In closing: I couldn't have picked a better four years to blog about Spartan athletics.  Four banners have been raised to the Breslin Center rafters (with a fifth, bearing the number "1," expected at some point in the future), and the first Big Ten football championship trophy in 20 years found its way to East Lansing.  There have been few times over the last century when the words "Their specialty is winning" have rung more true.

I'll be rooting and reading along with all of you as those Spartans look to continue that trend in the years to come.  Go Green.