Heads Up, All In: MSU-Michigan Preview

Share All sharing options for: Heads Up, All In: MSU-Michigan Preview

When last we previewed a game against our friends from Ann Arbor, they had a tough time even imagining they could win the game.  The Wolverines had lost six straight games at that point and appeared to be headed toward the conference basement.

Well, as I'm sure you'll recall (if you don't recall it, I'll have what you're having), Michigan proceeded to knock off MSU, 61-57.  Michigan State got nothing out of its bench and very little out of non-Kalin Lucas starters, while the Michigan players, led by Zack Novak, knocked down 10 of 21 three-point attempts.

The Wolverines used that game to propel themselves back into middle of the conference pack and the NCAA Tournament discussion.  Michigan has now won 7 of its last 10 games.  One of the three losses in that timespan was by just 2 points on the road against Illinois; another loss came only after a shotput three-point bankshot by Wisconsin's Josh Gasser found the bottom of the net as time expired (the third loss was to Ohio State).  This team is competing at a pretty high level right now. 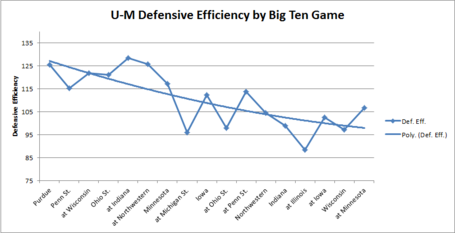 The Wolverine defense was shredded during the first seven Big Ten games, allowing a staggering 1.22 points per possession. In the last 10 games, Michigan has allowed just 1.03 points per trip. In case you are unfamiliar with efficiency margins, this is a radical improvement. Michigan’s worst defensive performance during the last 10 games, 1.14 points allowed per trip, is better than its best, 1.15 allowed per trip, during the first seven.

On offense, meanwhile, Tim Hardaway, Jr. has emerged as a second offensive playmaker for John Beilein on the perimeter.  Hardaway has scored in double digits in each of the last 11 games, averaging 17.5 points/game on 36-72 three-point shooting over that stretch.  Dylan on this point:

While the overall offensive production hasn’t shifted much over conference play, one player has emerged as a star: Tim Hardaway Jr. Hardaway has shifted from a streaky volume shooter to an efficient scorer. Suddenly he’s hitting threes, attacking the basket, dunking in transition, setting up teammates off the pick and roll and even hitting pull-up jumpers.

Needless to say, Michigan fans can feel a little more confident about their prospects this time around.

Looking at the overall conference numbers for Michigan (check the box), the team's offensive strengths lie in limiting turnovers (16.4%) and shooting the ball (51.7% on twos, 38.7% on threes).  Meanwhile, they rank dead last in both offensive rebounding  percentage and free throw rate.

On defense, despite the recent resurgence, Michigan is average at best in each of the four factor categories.  They've been particularly vulnerable to interior scoring, as opponents have converted 53.8% of two-point attempts, with no major shot-blocking presence on the interior for the Wolverines.

Keys to MSU winning the game that will surprise absolutely no one who's been paying even the slightest attention:

(Yeah, three and a half bullets on the offense; half a bullet on the defense.  Of late, it's really boiled down to whether MSU can squeeze out enough points.)

It's been a long time since there was this much on the line for both teams in a Michigan-Michigan State basketball game (so long that I'm not going to try to figure out just how long).  The game is more of a must-win for Michigan than it is for MSU.  We can probably get into the tournament with a loss; they probably can't.  But, when you add the pain that getting swept by Michigan would cause to Tom Izzo and every Spartan below him in the basketball program and fan base hierarchy, the stakes really couldn't get much higher.  Izzo will pull out all the stops.  The question is whether there are enough stops left to be pulled out.

KenPom predicts a 64-61 Michigan win.  Objectively, I'd pick Michigan to win, perhaps by a few points more than that.  Michigan's got two scorers to match Lucas and Green now, and their supporting cast looks to be in a more predictable groove at the moment.  Here's hoping my sandbagging works as well as Dylan's did five weeks ago.

PLAY THE MARCH TO THE CHAMPIONSHIP GAME AND YOU COULD WIN A TRIP FOR TWO TO LAS VEGAS! LOOK FOR THE CODE INSIDE SPECIALLY-MARKED PACKAGES 12-PACKS OF BUD LIGHT ENTER CODE AT FACEBOOOK.COM/BUDLIGHT ----- No Purchase Necessary. Open to U.S. residents (except CA & TX) 21+. For a chance to win a Grand or First Prize, Game Period 1 begins 3PM CST on 2/14 & ends 3PM CDT on 3/18. For a chance to win a First Prize only, Game Period 2 begins 3:00:01PM CDT on 3/18 & ends 3PM CDT on 4/30. To participate, obtain a Code from inside specially-marked packages of Bud Light beer or to request a Code without purchase, visit budlight.com/freecode during a Game Period. Limit one (1) free Code request/day/person or email address. To play, text HOOPS to BEERS (23377) & follow prompts or visit budlight.com/freecode & follow instructions. See Official Rules inside package or at budlight.com/freecode for complete details. Void in CA, TX & where prohibited. Enjoy Responsibly – ©2011 Anheuser-Busch, Inc., Bud Light® Beer, St. Louis, MO