Share All sharing options for: Reviews and Previews: Adreian Payne

Coming into the 2010-11 season, Adreian Payne was Michigan State's highest ranked freshman with an RSCI (average) ranking of #27 in his class. Although he opened with 10 points and 7 rebounds in 14 minutes against Eastern Michigan, he never managed to break out and separate himself from the other young big men in MSU's rotation and finished the year with an offensive rating of 89.5 on a shooting line of .479/.000/.486 (2pt/3pt/FT). The departure of Garrick Sherman and arrival of redshirt freshman Alex Gauna leave Payne in nearly the same position he was in at the start of last year: needing to establish strength, consistency and skill to get more minutes in a crowded Spartan frontcourt.

"Raw", "athletic", and "potential" are words often seen in descriptions of Payne's game. Those can be great words, implying exciting things to come, but they also mean that what he's producing right now isn't everything it could be. Consider the following self-assessment by Payne:

"My athleticism was a gift so I try to use that when I can," said Payne. "As I work on my game, the skill will come along with it. I think that I can run the floor and block shots. I need to get stronger and work on my ball handling and decision making."

That quote might have come from the end of last season but he actually said it in early 2009, before he had even visited MSU. And what was true then remains true after an up-and-down freshman year where he showed flashes of brilliance but not enough skill and polish at either end of the court to convince Tom Izzo to keep him on the floor more than about 9 minutes per game.

But why didn't Izzo give Payne more than those 9 minutes, minutes he might have used to gain experience and realize that potential? Probably because it would be hard to argue that Payne wasn't frequently a liability when he was on the court, especially on the defensive end. So it is understandable that he would log a lot of time on the bench in conference play. But the puzzling fact was that he still averaged less than 10 minutes a game in the non-conference season. One of the less noted consequences of the brutal pre-conference schedule that Izzo lined up is that it reduced the minutes available for guys like Payne to play and get experience without jeopardizing a win or a comeback. MSU had four blowout wins in the non-conference and those were the games where Payne saw the most time. In the other 8 games Payne only logged 7 minutes per game.

In the review of Keith Appling's season I looked back at an earlier post that did a midseason assessment of how the two freshmen were doing. Based on the data referenced there, we would have expected Payne to have averaged somewhere around 13 minutes, 22% possession percentage and a 100 offensive rating, keeping in mind, of course, that each situation is different and that freshman big men struggle more than other position players to make an immediate impact. Nonethless, it's probably fair to call Payne's actual numbers (9 mpg, 19% usage, 89.5 ORtg) something of a disappointment, whether the disappointment is in Payne's performance or Izzo's handling of him. There were some bright spots, as we'll look at shortly, but Payne will need to take a major step forward to be the player many hoped he would be by his sophomore season. 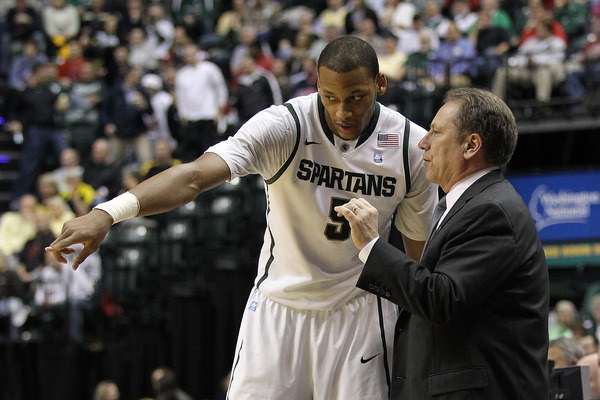 Defense was definitely a major factor in limiting Payne's on-court time. Payne often found himself in no-man's-land trying to master the complex hedges and switches required by Izzo's defensive schemes. His lack of experience against more seasoned post players of similar size also hurt him, although he did have some impressive showings, most notably against former All-Ohio Red AAU teammate Jared Sullinger, whom Payne helped limit to 11 points in their matchup in Columbus.

This brings up another word often heard in discussions of Payne: focus. He is sometimes criticized, unfairly, I think, for needing a "motor" or taking plays off. When you look at his background, it's clear he hasn't had an easy path and knows how to work. But when he's struggling with the X's and O's, he starts to seem tentative and uncertain and to lose focus. This may be why he seems to be the player Izzo spends the most time with during timeouts, which has been the focus of some recent internet snark.

While the half-court game may bring out the primary challenges Payne faces, he seems to be at his best when he's playing naturally and can let his athleticism shine, most often in transition or battling under the basket. He was a terrific shot-blocker, easily the best on the team at a tremendous 9.9%, meaning that he blocked roughly 1 out of every 10 2-point shots taken while he was on the floor. If he'd been able to maintain that percentage while playing more minutes, he would have been second only to Dallas Lauderdale in the Big Ten. He was also a very solid rebounder, 2nd on the team in both offensive (to Nix) and defensive (to Green) rebounding percentages, at 11.8% and 16.8% respectively. That translates to 10 boards per 40 minutes (4 offensive and 6 defensive). Once again, it's easy to imagine great things for him with more minutes, say occasional double-doubles with a handful of blocks. If he can add the strength that was missing due to his offseason shoulder surgery and, perhaps more importantly, develop a greater comfort level with his role in Izzo's defense, his shot-blocking and rebounding alone will be enough to make him an asset on the floor.

END_OF_DOCUMENT_TOKEN_TO_BE_REPLACED

It was on the offensive end that the numbers and eyeballs agreed on Payne: he seemed to find his game and get more comfortable as the season went on. And although three straight scoreless tournament games dropped him below the Mendoza line of 90 in offensive rating for the year, he was basically on an upward trend toward the end of conference play. Here's visual confirmation: In addition to his offensive rebounding, Payne helped himself by getting to the line a lot. His free-throw rate (FTA/FGA) of 48.6 was behind only Nix and Roe. He'll need to do a better job taking advantage of those opportunities: his 49% free-throw shooting was better than only Sherman on the team. Presumably that is another area he can target in his summer preparation.

The big area of potential improvement for Payne is his post play in general, from his under-the-basket moves to his decision-making. Right now he gets a lot of his points from put-backs or broken plays, but he hasn't developed, that I have seen, a "go-to" move or moves around the basket. And he tends to be a bit of a black hole in the paint: the ball goes in and never comes out again. He's not a strong passer out of the post yet and he somehow managed an assist rate even lower than Durrell Summers - Payne only had 5 assists all year (1 in conference play) against 21 turnovers. It's safe to say he probably needs to improve his decision making when he gets the ball.

So if there's anyone who seems like he has a lot to gain from an intense offseason, something he missed last year, it's Payne. Number one, he'll be looking to just work on his game on both ends. Perhaps the projected Canadian tour will give him a the chance to log some of the minutes against live competition that he may have missed this season. Other than that, we assume he'll be a fixture in the weight room, trying to add strength and size to his undeniable athleticism.

With the Spartans losing only Sherman from the frontcourt and adding Gauna it may not be as critical to the team's success that Payne take a step forward as it is that, say, Keith Appling does. But when you consider what a much-improved season from Payne could mean in terms of offensive improvement - post scoring, matchup problems for opponents, creating open looks outside for Appling, Russell Byrd and Travis Trice - it's hard not to feel that developing Payne's game should be high on the list of Izzo's off-season priorites.

The key thing to look for with Payne next year will be, of course, minutes. If he's getting the minutes that will show that not only is he gaining valuable experience but he's become competent enough on defense to avoid being a liability. Also, look for a 2-point field goal percentage of at least 50% or, hopefully, higher. That will be an indication that he's improved either his post game, his offensive decision-making or both. Finally, even a modest improvement in his assist and turnover rates will keep defenses a little more honest against him. The rebounding and shot-blocking should take care of themselves. We'll let Tom Izzo have the last word: "He just needs reps, he needs a great summer of lifting and shooting and (Payne) goes from an average player I think to a phenomenal sophomore year. I really think he has an upside that is off the charts."

[This is part of a series of posts on the major players from the past season and players we'll see for the first time in the coming year. Not all of them will be as extensive as this one. If you like this kind of thing it's available in bite-sized chunks by following me on Twitter: @connertp.]