Share All sharing options for: The 2011 Favorite Spartan Bracket -- The Izzo-Heathcote Region

First off, congratulations to Alan Anderson, who barely edged Derrick Mason to win the play-in poll. You'll see him immediately.

Before we launch into this bracket, a note -- I seeded this semi-randomly (the only change I made was that I moved Mateen so that he wouldn't possibly meet Magic in the second round.  That seemed wrong to me.  Everything else is randomly seeded), as something as ambiguous as being a person's favorite athlete should really have no seeds.  Now,  the first bracket to be revealed, the Izzo-Heathcote Region.  I chose to honor coaches with the regions, and I couldn't separate Jud and Tom.  Here we go: 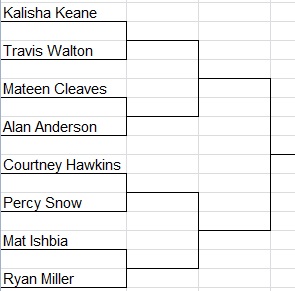 Here's the second half of the bracket: 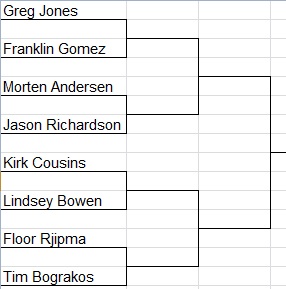 The Mason bracket will be posted later tonight.  For now, your thoughts?