The Illusion of Last Impressions

Share All sharing options for: The Illusion of Last Impressions

You only get one chance to make a last impression. This is a lesson everyone in or around Michigan State football has probably been able to take to heart lately. For the past four years, Michigan State has ended each season with a bowl loss, of varying margins. Naturally, these being the last time we had the opportunity to see the team, these games are typically given special importance by members of the media. That has been especially true of Michigan State's 2011 bowl game.

But I have to admit, I was a little surprised that Coach Dantonio was still having to comment on the effects the Alabama loss had on the team at the Big Ten Media Days. He said the right things about using it as another motivator, and the game is obviously one of the big talking points of last season, but then again, it was one of the big talking points of last season. It took place almost seven months ago. It'd be like asking how it felt to clinch the BT championship and what that did for the team: it's a valid question, but is one that has almost surely been commented on a billion times already. It's the sort of thing you kind of expect to go away after spring practices.

But these comments and questions about the Alabama game raised a more interesting query to me: Are bowl games, the last games of the year, really that a big deal for the next year's teams?

The bowl game is essentially, after all, an exhibition game taking place more than a month after the layoff from 'real' football. Is there some sort of 'bowl hangover effect' for bowl losers, or alternatively, a 'bowl booster effect' for bowl winners heading into the next season? What if you really crush a team or get crushed; is there a difference then?

Predicting next season's performance relative to the performance in bowl games is not just useless, it actually might be a little bit less than useless. Based on the sample of data I gathered, if you want to have a more successful season this year than you did the last, you are literally a tiny, tiny bit better off losing your bowl than you are winning it.

And this maybe makes a bit of intuitive sense. After all, a good bowl performance (and the win that usually comes from that) can get your players noticed by NFL scouts and if they leave, your team might understandably suffer their absence the next year.

From 2006-2009, it did not matter what happened in your bowl game, it was not going to predict anything substantial about your next season: 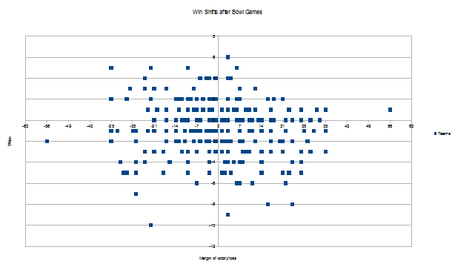 I apologize for the tiny labels. Each point is a team. The Y-Axis is 'Change in wins from the bowl year to the next year' with intervals of 2. The X-Axis is 'Margin of victory or loss in the bowl game' with intervals of 7. I don't really apologize for the messiness of that data and the lack of the nice diagonal distribution of teams, because, well, that's the point. If you're looking for any sort of correlation between two data sets, a graph like that is gonna put a damper on your day real fast.

But that's not especially relevant to an MSU fan this year. The more concerning question for us is: Does winning or losing a blowout bowl game influence the team's next season?

I've seen a decent amount of fans and analysts comment that the Alabama game is going to be a possible drag on this year's team (the majority), as well a sizable minority (including players and coaches) argue that it will be fuel for the team to get better. I'm pretty sure I haven't been immune to this sort of thing. Well, the short story is: we're all wrong.

Now, for MSU fans, there lies a small problem in properly analyzing this question: MSU-Alabama was a truly horrific beatdown of a bowl game. Like, probably much worse than you even thought. It was not the most horrific bowl game beatdown in the past eight years or so, but only 2 contests match or exceed it: Georgia Tech's demolition of Tulsa in 2004 (52-10), and Tulsa's shock and awe campaign against Bowling Green in 2007 (63-7). Of course, this can only mean that in 2014, MSU is going to beat down some poor bowl team by 50+ (preferably in a national championship, thanks). So we got that going for us, which is nice.

And, to be fair to the 'Alabama will cause hangover' prognosticators, those two teams did each end up falling from eight wins to six (Bowling Green) and four (Tulsa) wins the next season of play. So that should mean we have a valid question here, right? Probably not. A sample size of two, as any statistics professor will tell you, usually means GTFO and that's no different here. Moreover, only one of those contests involved a BCS team.

So, instead of taking two games at face value, let's expand our definition of what a blowout win or loss is, and cull out the experiences of Non-BCS teams, to both expand and improve our sample. I'm somewhat arbitrarily choosing to set the new standard of 'blowout win' at a 21 point margin of victory, but I think the rational behind it is fairly sound.

Here's my thinking: If entering the third quarter you are down by a touchdown or field goal, that's obviously a close game. A 10 point deficit is two scores, but still isn't so bad. Scoring two touchdowns is harder, but not exactly rare in a quarter. 17 points is asking for three scores, and 20 is asking for four, though two are field goals. But once you hit 21 points entering the fourth, you're in three touchdown territory and your lead is almost insurmountable (Fun Fact #1: Number of times MSU offense scored 21 points or more in a single quarter last year? Only 4 times out of 52 quarters (WMU, N. Co, NW, PUR) . And only twice did the defense hold opponents enough to make up a 21 point deficit (WMU, N. Co)) (Fun fact #2: amount of points scored by MSU in the 4th quarter of the Northwestern 'Biggest Comeback Ever' game in 2006? 24.)

21 points is the type of deficit where, late in the game between two BCS teams, you can fairly certainly say, "Well, this one's over." So, it would follow, that at the end of the game, when the clock strikes zero, a 14 point win is very good and a 17 or 20 point win is great, three touchdowns or more will be our definition of blowout.

And that conclusion is (same formatting as the above scatter-plot, BCS teams only)... 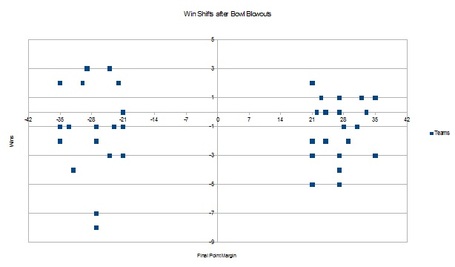 But you might be looking at that scatterplot and saying, "I don't know about that Heck..." So let me try to address what could be the two big concerns.

Potential Bad News point #1: Among teams that won 10+ games and were blown out in their bowl games, the following season they had regressions of -8, -7, and -1 wins.

Good News Counterpoint: Admittedly, not exactly comforting, but three data point samples aren't much more useful for drawing conclusions than are two data point samples. And the overall trend lines indicate that if the Spartans are to fall off, it's much more likely to be one or two games than four or eight, and would anyone here reject a nine or ten win season?

Furthermore, the data shows it's possible to get blown out and not just improve, but greatly improve, the next season, with five teams improving and eleven regressing (with one staying the same). This includes such teams as Georgia Tech improving from 9 to 11 wins and Wisconsin improving from seven to ten.

First, see the noise section for a possible explanation.

Second, correlation still says that point is stupid (i.e. the amount you lose or win by, or indeed, whether you win or lose at all has no effect on your next season). There are five regressions of one win that skew the ratio in favor of teams doing worse the next year, but that's very difficult to base assumptions off of.

What's the correlation between win changes in teams who either blow out or are blown out in bowl games? A miniscule 0.03. Translation for those of you who aren't into stats: DRAWING CONCLUSION OFF BOWL BLOWOUTS IS USELESS.

"Does a great bowl performance lead to great next season? It seems that most "offseason darlings" (Georgia in 2008, Ole Miss in 2009, Nebraska in 2010) dominated a bowl foe and receive a bit of extra hype because of it. As mentioned above, it does appear that there is value in late-season momentum, as long as you know how to find it. What about the power of a single game in late December or early January?

The verdict is, predictably, not so favorable. The correlation between a team's performance in a bowl and their performance the next season is 0.08. Only 39 percent of the teams in the top quadrant of bowl performers actually improved the next season."

"Of the 20 best bowl performers from 2005-08, 10 improved the next season and 10 regressed. Of the 20 worst bowl performers, it was the same story. For every positive story, there is an equal and opposite story.

Here is the bottom line. There is value in determining who gained worthwhile momentum during the last 3-5 games of the season, but you should not spend even five seconds attempting to derive value in bowl performances."

"...you should not spend even five seconds attempting to derive value in bowl performances." Oops.

The other obvious reason that there would be more teams ending the next year with fewer wins would be that, by definition, bowl teams have at least six wins, so it's easier to go down than up. I think we can safely ignore this as a conclusion shattering argument for two reasons: firstly, the above Connelly article echoes my conclusions nearly exactly using a non-win related set of data. Secondly, teams regressing, improving, and staying the same is generally a random enough phenomenon to not spoil the data.

This year, Michigan State, Virginia Tech, Connecticut, Michigan, Arizona and other members of the crushing bowl loss club; don't worry about it. And Alabama, Stanford, Oklahoma, Mississippi State, Oklahoma State; don't get too excited. As in most cases, drawing conclusions off one game is crazy, and that goes doubly so for bowl games.