Quarters: Is Pat Narduzzi's approach to ND money in the bank, or a drunken mess?

Share All sharing options for: Quarters: Is Pat Narduzzi's approach to ND money in the bank, or a drunken mess?

*SPORTS ARTICLE TITLE DOUBLE PUN ALERT* I get like, some sort of press pass now, right?

This is not a position by position breakdown. This is three or four semi in-depth thoughts on things that interest me about this match up. Enjoy/Discuss.

"Narduzzi is referring to Michael Floyd as "Waldo" this week because MSU's defense must be able to find him on every play, and he moves around a lot. MSU will try to get a Johnny Adams-Floyd matchup on certain downs and distances, Narduzzi said, but in other situations MSU will play boundary (Dennard) and field (Adams) as usual."

I enjoy watching Pat Narduzzi defenses play against pass first offenses (particularly pass first spread offenses). Not because our base 1st and 2nd down scheme, the 4-3 quarters (or cover four) has any high tech tricks against such offenses. In fact when the players aren't very talented, it's probably the opposite, as the horror shows of 2009 can attest to. In fact, it's more based on what Hank Hill would call, "Ah, the fundamentals."

But when players are talented; fast, strong, and technically sound, it shrinks the field. Sidelines become extra defenders. QBs can be baited into making low percentage throws, and then be punished when they do. Running games can be abandoned, and teams can turn one dimensional, as opposing offenses run into numerical mismatches at the point of attack. And the red zone can turn into a postage stage of open real estate, choking the flats that are normally open between the 20's. 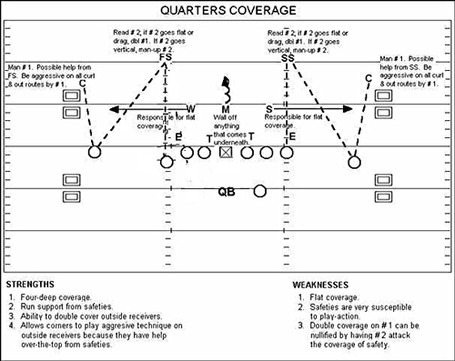 Of course, that's when things are going well.

But more interestingly for the purposes of this game, it can force opposing offenses to do things they don't want to do, or alternatively, do things that Narduzzi wants them to do.There's going to be a game with-in the game going on between ND's offense and MSU's defense. As always, one of the pillars of quarters coverage is to allow short gains and eliminate big plays. But the scheme also seemingly presents a specific blueprint on challenging the 3-wide receiver, 1 TE set ND normally rolls with (as noted in the above Rexrode link).

On run plays, the safeties will aggressively crash the line, with Narduzzi's scheme allowing MSU to quickly get nine players into the box if need be. I'd be shocked if Cierre Wood or Jonas Gray see the types of massive holes they saw in the UM game, and should only gain modest yardage (think 3.5-4.5 Yards Per Carry). Seeing as how Kelly reluctantly ran the ball averaging 6.0 yards a carry against Michigan last week, I expect ND to basically abandon the run game on Saturday, maybe early on.

But you don't get something for nothing. Selling out against the run, opens up the pass. The passing game is a different story, and, as you can guess, where the game should be won. Floyd and T.J. Jones (?) will get single coverage on the outside against Dennard or Adams on short routes, with Robinson and Lewis helping double over the top on deeper routes. I'd argue that the key man to watch, at least for tactical purposes, is not Michael Floyd, but Theo Riddick (or whoever is in the slot, I guess), a player who had a very big game against MSU last year. How he plays will likely set the tone for the rest of the offense. Will Kelly:

A. choose to have Riddick attack the middle of the field to prevent Robinson from doubling Floyd, at the expense of throwing Riddick into the strong pass coverage triangle of Norman, Bullough and Robinson?

Or B. Set Riddick loose in the flats of the defense, but subject Floyd to more consistent double teams from Robinson rolling over or underneath in coverage?

If Kelly wants to take advantage of the scheme's weak point, the area underneath the corner backs and between the sidelines and linebackers, he has to weaken his best match-up on the field. On the other hand, if he wants single coverage in his best match-up, he might have to send the mediocre handed Riddick into the teeth of the MSU back seven.

And who has responsibility for tracking Woods on passes out of the backfield (he's averaged about 15 yards a catch)? MSU's line backing corps is probably fast enough to keep up with him, but will they be able to be in position and tackle soundly? Remember that Eric Gordon had a very strong opening drive against ND, but was then injured and held out for the remaining 3.5 quarters or so. Is Denicos Allen an upgrade over John Misch? Survey says: most likely.

Will Rees have the discipline and patience to take what the defense gives him, and avoid throwing into the traps of the Cover 4 (as Crist managed to do for most of the game last year)? Or will he try to force throws over the top, and cause Brian Kelly to turn a shade of purple that can only be described as Grimace? I'm curious to find out.

A note on regression to the mean:

What most ND fans, and some national analysts, think 'regression to the mean' looks like:

What a true 'regression to the mean' would likely look like:

Such things cut both ways.

So, yeah, what else is new? Rees' pass progressions (accurately labeled by MGoBlog as FLOYDFLOYDFLOYD) start to make more sense when you look at those numbers. An 80% catch rate, and 10 yards per target, on 30+ targets is really, really, good. Believe the hype, Michael Floyd is extremely dangerous, and he has a QB who is committed to getting him the ball, perhaps to a fault.

But don't sleep on B.J. Cunningham. He has caught every ball Cousins has thrown his way so far. I repeat: every ball and he's even shown himself to be even more explosive than Floyd has. 14 targets isn't a huge sample size, but, it isn't small either. Can he make ND corner back Gary Gray look very bad again? Oh, indeed.

Anyone making a prediction on how "up" or "down" Notre Dame will be for this game is likely dumb. This sort of armchair psychology is insufferable, typically unsupported by data, and seemingly everywhere, even forming the crux of some predictions.

A special circle of hell is reserved for the sports writer who enters the ND game with two templates already written up, one titled, 'ND with backs against the wall, prevails in show of mental toughness' and the other titled 'Fragile ND implodes, wilts under the pressure of a win-less start'. I guaran-shee you some lucky writer tries to pull off this type of 20/20 revisionism in the post game. I think we'll have a pretty good feel for the mental state of the Irish program at about 7 PM Saturday night. Let's just wait til then, huh?

Notre Dame is a good team and is a tough match-up for MSU. Lots of people here and around the MSU web-o-sphere seem awfully confident about MSU going on the road, and beating a team that performs average-to- very strongly in most metrics of college football, by multiple scores. I'm not so confident as that.

With that said, I thought at the beginning of the year that Michigan State was both more talented and better coached than this Irish team, and the past two weeks have done nothing to change that opinion. MSU is a good, disciplined, consistent team. ND is a good, undisciplined, inconsistent team. Spartans by 6.