Projecting the Big Ten Basketball Race: At the Quarter Pole

Share All sharing options for: Projecting the Big Ten Basketball Race: At the Quarter Pole

With 1/4 of conference play gone by, it's time to take an early look at the Big Ten basketball race using the Bradley-Terry and margin-aware Bradley-Terry ratings. Rather than listing every possibility (which would require a table twice as wide as that for football), I'll include graphs for the win distributions of various teams and a table of probabilities for winning the title (outright or shared) and finishing in the top 4 (thus earning a bye in the Big Ten tournament). The table is based on 100,000 simulations; in case of a tie for the final bye, tiebreaker rules are not used and each team involved in the tie is given a fraction of the credit for it (for instance, a three-way tie for 3rd gives 2/3 of a top-4 finish to each of the teams in the tie, as two of them will get a bye and one will not).

Of note is that nobody is expected to put up an especially gaudy (or especially miserable) record; despite being the top-ranked team (at #8) we're underdogs in four of our remaining games (road games at Illinois, Indiana, Michigan, and Ohio State). Illinois has the advantage of not having to play at the Breslin Center (as does Northwestern). Indiana, with three games against the top five (@MSU, OSU, Michigan) already out of the way, has an easier remaining schedule than Michigan and thus vaults them despite the extra loss.

Now, a chart showing the win distribution (click for bigger): 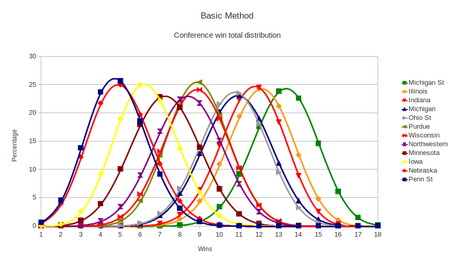 Michigan State has a clear advantage, with Illinois slightly ahead of Indiana; Michigan and Ohio State are nearly indistinguishable, as are Wisconsin and Purdue and (at the far end) Nebraska and Penn State.

After the jump: the margin-aware method.

Again, MSU has the big lead (we're only underdogs twice according to this set of ratings, at Ohio State and Indiana; at Michigan is a virtual toss-up), but Ohio State and Illinois swap places in the order and Wisconsin is closer to the dark-horse contenders (and the race for the fourth bye) than to Purdue and Northwestern. 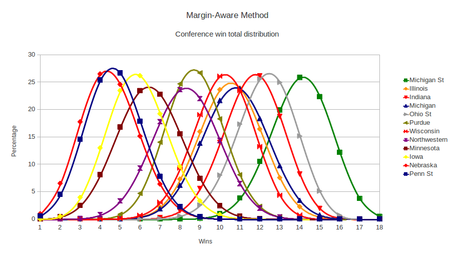 Ohio State's lead on Indiana is somewhat larger than Illinois's in the basic system. Michigan and Illinois are nearly indistinguishable, with Wisconsin close on their heels. Northwestern, Michigan, and Minnesota have relatively wide distributions; this suggests they have a lot of near-tossup games ahead.