With a 25-point blowout of a pretty good opponent between us and the loss in Ann Arbor, we can go back to what we were doing before: marveling at just how good this basketball team has been, preseason expectations to the contrary. Despite the back-to-back losses to Northwestern and Michigan, MSU remains right on the edge of the top 10 nationally according to the human pollsters and has actually risen to #4 in the country by KenPom's calculations. (We'll have to take a temporary hiatus from giving Mr. Pomeroy such a hard time about overrating Wisconsin.)

An interesting aspect of MSU's unexpected emergence as a national contender is that there really hasn't been a breakout star in the mix. Draymond Green has been very good, but his numbers are basically right where they were last year. (MSU's team success does have him flying high in KenPom's Player of the Year rankings, though.) Keith Appling's development has probably been the biggest individual factor in the team's success, but 12.6 points and 4.0 assists per game don't exactly knock your socks off--and are well short of what Kalin Lucas posted last season.

Beyond those two players, no Spartan is averaging more than 10 points or 4 rebounds per game. That means a larger number of players are contributing smaller amounts of production.

The details after the jump

The correlation between player depth and team success shouldn't come as a surprise to long-time readers of this blog. A metric we've looked at in the past is "depth ratio." The basics:

This ratio allows us to compare a single number across different teams and captures two key aspects of having depth:

Historically, the magic number has been 3.00. Izzo-coached teams with ratios below that number have contended in the Big Ten and advanced to at least the second weekend in NCAA Tournament play. Those with ratios above that number have not. (The exception was the 2009-10 team, which defied the odds throughout its tournament run.)

I've updated my depth ratio table to include last season and the current season: 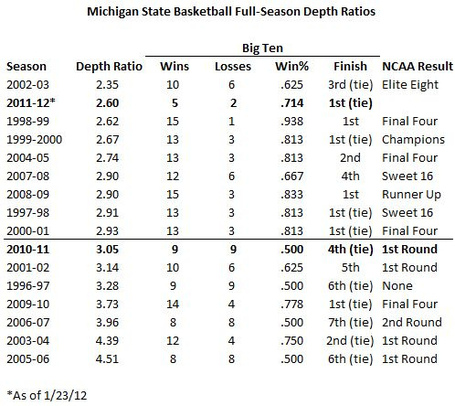 As good as the team's depth ratio looks this season, you could argue it actually understates how deep the team is. Digging back even further in the archives, here's Mr. Gasaway's (less flexible) definition of "Izzo depth" (on which my work on depth was built):

Let's define "Izzo depth" as seven players each getting between about 40 and 70 percent of the minutes. As seen here, the 2005 team had Izzo depth. The 2006 team--while featuring three demonstrably more talented players than any member of the 2005 team--did not. The first went to the Final Four. The second lost in the first round. And there you have a neat little parable on talent vs. team.

The 2012 Spartans meet that standard and go one further: eight players are averaging more than 16 minutes per game. Going back a full decade-plus (to the 1999-2000 season), that statement cannot be said about any previous Tom Izzo team. (Five MSU teams over that period have had seven players at 40%+.) Izzo has always liked to talk about having six starters. This season, he has closer to eight.

While there have been a couple recent bumps in the road, the players on this team are doing what players on good Izzo teams do. The go-to guys (Green and Appling) are, more often than not, converting when they're gone to. The other upperclassmen (Austin Thornton, Derrick Nix, Adreian Payne) are fulfilling their roles more efficiently than they did the previous season. And the freshmen (Branden Dawson, Travis Trice, Brandan Kearney) are making mistakes but making enough positive contributions to offset them. As a bonus, you can add a transfer player (Brandon Wood) producing points at an extremely efficient clip.

Our expectations were down coming into this season, partially because the team only returned five significant contributors from last year. But, with six new faces added to the mix (including two players, Russell Byrd and Alex Gauna, who haven't been required to make major contributions so far) Tom Izzo has found enough parts to play basketball the way he wants it played.