Mining the Box Score: Close but no cigar

Share All sharing options for: Mining the Box Score: Close but no cigar

Straight to the numbers, I guess. Mini-box (big box): 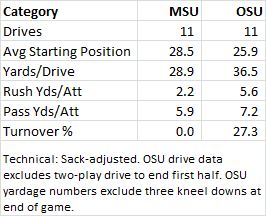 After looking at the numbers, I'm feeling less strangely-optimistic than I was immediately following the game.

Michigan State managed to keep the total yardage numbers reasonably close (303 vs. 396 when you back out the kneel downs) despite (1) being significantly less efficient than Ohio State in both offensive phases and (2) losing the third down conversion percentage battle for the first time season (26.7% vs. 46.2%). The turnovers were obviously the main factor in avoiding additional damage on defense. And when MSU did move the ball, they really had to grind it out (albeit through the air). The touchdown drive was the only drive on which MSU averaged six-plus yards per play.

Dan and Chris have already summed up the big picture takeaways quite nicely. I'm with Chris in evaluating Andrew Maxwell's performance as pretty darn solid. He's putting the ball on the money with high frequency, but he's throwing into very narrow windows to receivers who aren't making big plays in traffic. Fewer out-and-out drops this week, at least. The passing game was better than it has been (5.9 yards/attempt, vs. 3.2 against Notre Dame and 5.5 against EMU), but still not good enough. Especially considering the running game was much, much worse than it has been in any other game.

If the officials don't blow the fumble return dead and Kurtis Drummond runs the ball into the end zone (or Braxton Miller under throws his TD pass by two feet), we all spend today fawning over Keith Mumphrey's tackle-ignoring run into the end zone and talking about how the defense willed the team to victory. That wouldn't change anything fundamental about the team, of course. This would still be a decent-but-flawed team trying to win a decent-but-flawed conference. It would just be doing it with the advantage of what would be 12.5 percentage points in the final conference standings. Alas, not.

MSU was, at the same time, fortunate to be in the position to win the game and unfortunate two key breaks at the end didn't allow them to do so. There was some progress in the passing game, but the Jackson injury (see below) and the weakness in previous areas of strength probably offset that, at minimum, in terms of appropriate going-forward optimism/pessimism level.

Le'Veon-Going-Busted Watch. He's on pace for 322 carries and 370 touches (including pass receptions) in the regular season now. This is still too many, but it's dropped several notches down on the list of things to worry about. A 35-carry game against a quality opponent would be welcome now.

Penalty Watch. This is even further down the list. Four penalties for 35 yards (plus two that were declined by OSU). Three on the offense, one on the defense, FWIW.

The thing to definitely worry about now. Two of our three consensus best offensive linemen are out--one for the season (Travis Jackson), one for at least a good chunk of it (Fou Fonoti). It's hard to judge the offensive line based on the numbers right now. The team is averaging a decent 4.5 yards per rush, but that's with one of the most dynamic running backs in the country consuming almost all the carries. And the line has only allowed a sack on 3.1% of passing attempts--but Maxwell hasn't exactly had oodles of time to survey the field. The opposing defense has been credited with at least 5 QB hurries in all three of MSU's games against quality opponents. As much as anything, the season hinges on whether Dan Roushar and company can get improved play out of an offensive line that's nearly down to a bare minimum number of functioning parts (depending on how quickly Blake Treadwell can get back up to full speed). Maybe "worry" is underselling things here.

Strategic decisions that were probably correct and probably didn't matter but let's talk about them anyway. All the late game decisions were defensible individually: kicking the field goal to get within one, mixing things up by running Le'Veon Bell on second down on the final drive, punting the ball away with four minutes to go. But collectively, they added up to voluntarily allowing Ohio State to running out its lead. Given the issues getting past midfield on offense the last three weeks, I'd have tended to go for it on the 4th-and-7 down 4 with 7 minutes to go. But we probably lose anyway. The bigger issue, as both Dan and Chris alluded to, is simply the lack of offensive explosiveness and corresponding failure to get into the red zone.

Prognosis for 2016 football season improves slightly. Aaron Burbridge and MacGarrett Kings did not play this week. They could still get "injured" and use their redshirts this year. FWIW, Kings seems like he could add a different element on bubble screens, but the lack of solid blocking from other receivers way not make it worth the cost.

Disruption, not so much. For the first time this season, MSU posted a disruption percentage below 25%, posting a figure of 20.3%. Some of that's due to the fear of Miller beating you with his legs if you go after him too hard, but he beat them a fair amount anyway. Four players posted multiple disruptive plays--Chris Norman (3), Max Bullough (2), Marcus Rush (2), and Drummond (2)--but there wasn't anything approaching the kind of mayhem the defense created in Columbus last year. Ohio State not being the complete train wreck they were 12 months ago played a part in that, of course.

Thinking outside the box score. We haven't talked about urinals in a while. Male people of the west upper deck: WHEN YOU GET THROUGH THE DOOR TO THE BATHROOM, KEEP GOING AND TURN LEFT. THERE ARE MORE URINALS AROUND THE CORNER, SEVERAL OF WHICH ARE ALWAYS OPEN. Glad I had a chance to mention that. I wouldn't complain about something like that after a win.