Mining the Box Score: Punt to (not) win

Share All sharing options for: Mining the Box Score: Punt to (not) win 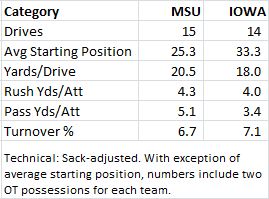 Both teams had moderate success running the ball and very little success passing it--although Aaron Burbridge and Keith Mumphery got Michigan State's passing numbers within striking distance of respectability, combining for 160 of the team's 179 receiving yards. An Iowa turnover allowed MSU to grab control of the game early. An MSU turnover allowed Iowa to grab the game in its entirely late.

Dan and Chris have covered the MSU foibles quite nicely. Once again, the offensive play calling showed the wrong kinds of inventiveness. And the botched spike/FG attempt to end the second half may or may not have cost the team three points, but it did dissolve the momentum resulting from Andrew Maxwell's 3 completions for 42 yards to get the team into FG position.

I will focus my angst on a somewhat-narrower-but-still-quite-aggravating strategic decision: punting to win. Michigan State faced a 4th-and-1 just past midfield with 5 minutes to go in the third quarter. Dantonio opted to punt. As karma dictated, Iowa moved the ball back past the originating point of the punt three plays later and ended up kicking a field goal to get within 4 points.

Mark Dantonio in the press conference:

Dantonio on 3rd qtr punt: "It’s fourth down on the 40-yard line and you’re getting booed for not going for it? I mean, get real."

Set aside the factual inaccuracy regarding the yard line. Dantonio went for it on a 4th-and-1 against Boise State from his own 36-yard line . . . in the first quarter. But suddenly the question is laughable?

Yes, there have been two significant injuries to the offensive line since the opener, but that didn't stop the team from converting on 4th-and-1 three times last week. And Le'Veon Bell managed to gain positive yardage on 28 of 29 carries this week. Maybe there's a 25% chance MSU doesn't pick up the yard if they go for it; there's a 100% chance Iowa possesses the ball if you punt it to them.

To me, the combination of a very good defense and a very inconsistent offense means you grab opportunities to score points when they're there to be grabbed. Second case in point: running the ball up the middle on 2nd and goal on the 8-yard line on the first overtime possession. Sure, there's a risk you turn the ball over by throwing it there (and you could still run the ball, but do it in a way more likely to actually get into the end zone). But there's also the risk you settle for the field goal, your opponent is then able to also play it safe for a field goal, and you turn it over on the second OT possession.

This is not a good team (although it's also a team that seems to be less than the sum of its parts). But it was good enough to win on Saturday. The coaches chose, as the cliché goes, to play not to lose. Some clichés exist for a reason.

Le'Veon-Going-Busted-Watch. Bell is at an even 200 carries now and is on pace for 343 carries and 382 touches during the regular season. The odds of not getting to a bowl game may now be equivalent to the odds that we get to one and Bell can't play in it, so maybe I should drop this bit.

Also, the coaches did put Nick Hill is as the primary RB for the team's fourth drive. He was only able to gain 4 yards on 3 carries. Another argument in favor of dropping this bit.

Penalty Watch. Five penalties for 56 yards. Three on the offense, two on the defense. Once again, a problem but not the problem.

Defensible, but just. Disruption percentage of 22.9% for both defenses. I can live with that figure from the perspective of the MSU offense playing against a solid front seven. It's the third straight game that the defense has been below 25%, though (all three conference games).

Big picture, I am steadfast in my defense of the defense (the calls to abandon the fundamental nature of Pat Narduzzi's scheme because the cornerbacks are getting beat by good throws on occasion make no sense given that the defense is holding opponents to 5.0 sack-adjusted yards per pass attempt on the season), but the defense isn't quite the force of nature we might have hoped for. This was the sixth straight game with the defense posting a single sack, and obviously the dropped interceptions aren't helping.

34 combined tackles for Denicos Allen, Max Bullough, and Taiwan Jones indicate the defense consistently prevented big gains Saturday, but they came up one big play short of bailing the offense out.

Thinking Outside the Box Score. There's been a lot of talk about the sparseness of the crowd as the game went along. Yes, seeing the crowd stick it out and potentially have an impact on the game in the fourth quarter is the ideal. But: (1) 40 degrees with rain and wind is the worst possible weather combination for being outdoors and (2) this fanbase has now sat through 16 20 quarters of football and been rewarded with a grand total of six MSU touchdowns. As a practical matter, this is not a recipe for enthusiasm.

I almost never leave a sporting event early--even the blowouts--and I left before halftime on Saturday. Solid-sounding excuse: I had an 11-year old and an 8-year old asking to go home who had already soldiered through three hours of wet tailgating with their dad's friends from the internet. Truth be told, though, I didn't put up much of a fight.