Mining the Box Score: Spun around

Share All sharing options for: Mining the Box Score: Spun around

This is the kind of game where aggregate stats don't tell much of the story. But here's your mini-box (big box): 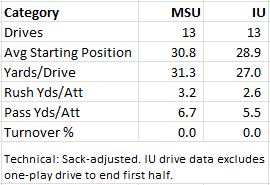 (Extra IU drive from the admirably-aggressive-and-situationally-congruous IU onside kick was offset by MSU possessions bookending the second half.)

Splitting out the drive data by half paints a better picture: 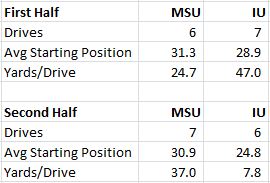 In the first half, Indiana averaged 7.3 yards per play. In the second half, Indiana averaged 7.8 yards per drive (including penalty yards in both cases). MSU outscored IU 17-0 in the second half and had a first-and-goal when the game clock expired. Halftime adjustments don't get much more effective than that. The problem, of course, is how big the adjustments had to be. The defensive issues in the first half basically boiled down to (1) the endless stream of penalties and (2) a lack of preparedness for the IU hurry-up offense leading to big plays on the outside.

Now is the part where we spin. The positive spin on the penalties is that they have not been a recurring issue--this was the first game since the opener that MSU had more than 6 penalties committed or 60 penalty yards. (Blame me if you want for saying penalties were no longer a concern last week.) And, FWIW, a lot of the penalties were on backups. So, you know, don't play those guys. Exception: Johnny Adams. He's going to continue playing--but maybe not on an island quite so much. (FTR: 2 penalties for 30 yards on offense, 4 for 55 on defense, 2 for 30 on special teams. FOR THE LAST TIME, STOP TO TRYING TO BLOCK PUNTS. Although that call was a combination of two guys making slight contact and the punter doing a good acting job. If only one guy touches him, I'm not sure the call happens. BUT THAT'S WHY TRYING TO BLOCK IT ISN'T WORTH IT.)

The seeming shock among the MSU defenders that Cameron Coffman was snapping the ball so quickly goes more on the coaching staff, I think. I'll leave it to observers with bigger Xs-and-Os brains than mine to determine the correct level of perplexity there.

Here's your positive spin on offense:

At the end of the Boise State game, Andrew Maxwell had 0 TD's and 3 picks, only one of which was a terrible throw and even that came with 7 seconds left in the half. At the close of yesterday, Maxwell had 6 TDs and 0 picks in the other five games of the season. If MSU can move the ball in a five wide hurry up look three or four times a game, Maxwell has earned the right to run that offense. More importantly he seems to have the mental stuffin's to do the job.

There's gold in mixing two or three heavy passing quick series into the first half before MSU is down significant points. If MSU can pick up 7-10 points off of three no-huddle series in the first half that would lower significantly the odds of having to come from behind.

On the topic of Maxwell's "mental stuffin's," how 'bout that TD pass to Bennie Fowler? Reading the corner blitz before the snap and audibling to take advantage of it: veteran move.

MANBALL ain't gonna work sans Travis Jackson and Fou Fonoti. But spreading the ball around through the air and running Le'Veon Bell to the outside could create just enough variety of threats to keep defenses from keying in on the offensive line's deficiencies. In theory. If Mark Dantonio will have it.

The #1 silver lining coming out of this game is, of course, Aaron Burbridge. Eight catches for 134 yards. (Obligatory: "Burbridge became the first true freshman in Spartan history to record a 100-yard receiving game.") The fact that Dion Sims appears to be out for a while negates some of the newfound optimism there, but you can get by with less talented tight ends picking up slightly fewer yards underneath the secondary. At some point, you have to have a big play receiver on the outside making plays deeper in the secondary. And MSU may have its man for that job now.

Putting aside all the spin, this was still just a 4-point win against a team Sagarin says would rank just 5th in the MAC right now. This remains an underperforming team barely struggling to stay relevant to the conference title race. If not for the fact the conference is struggling to even stage a title race, we'd all be using the phrase "rebuilding year" with frequency.

Big picture, MSU is now 4-2, with both losses coming against opponents now ranked in the top ten nationally. That two of the four wins have been such struggles against lower-tier opponents means the first half of the season has been pretty close to a complete train wreck. It is, however, a salvageable train wreck.

Le'Veon-Going-Busted Watch. After 37 carries and 3 catches on Saturday, Bell is on pace of 342 carries and 388 offensive touches in the regular season. We got the 35-carry game I asked for last week, just not the quality opponent. A bit of a "PLEASE NO" moment there with the apparent ankle injury on the tackle going out of bounds in the second half.

Obligatory disruption percentage numbers. A season-low 19.4% for the MSU defense. 18.3% for the IU defense. Both numbers may be skewed downward by the complete lack of QB hurries in the official box score. The scoring issue with those remains the major weakness of my invented football metric, although IU's quick-release passing offense did limit opportunities to get the quarterback for MSU. (BTW, I realized this week that disruption percentage runs along the same scale as turnover percentage in basketball--25% is really good for the defense, 15% is really good for the offense.)

I need to mention Taiwan Jones. And now I have. He was a big piece of the second half adjustments, making some solid tackles on the outside (4 tackles, one for a loss) in place of Chris Norman. R.J. Williamson was the breakout guy in terms of overall numbers on defense--9 tackles, 7 of them solo, at the safety spot. There's some competition on the margins in the defensive lineup. This is a good thing. (Related: Did we get word on Kurtis Drummond's status after he left the game early? He's been making big plays back there.)

Go! Go! Go! YAY for going for it (and making it) on fourth down three times. BOO for being in the position of having to. Also YAY for having a running back who can pick up a yard even when there's no push at all from the offensive line.

Thinking Outside the Box Score. All of my non-inside-the-box-score thinking this weekend occurred while standing in or watching the television feed from Comerica Park. Let's Go Tigers!