As previously announced, we will be making like online daters and checking each other out in person Saturday morning. Here are the details.

Jim from Shaw Lane Spartans has graciously agreed to host us at his normal tailgate spot. He'll be setting up when lots open at 7:00. Official start time for the tailgate is 7:30. (My own arrival will likely be somewhat later than that, with a legal dependent or two in tow.) Closing time will be 11:00. 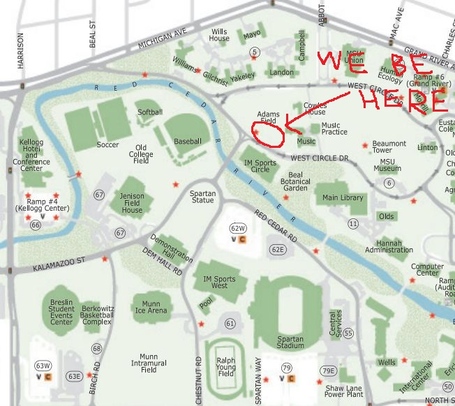 The goal will be to land on that red star, but look for the tailgate somewhere in the circle. Jim will put up a sign of some sort with a "TOC" scrawled across it. You can check his Twitter feed for any late-breaking adjustments to the location. You can either park in the ramp off Grand River in the NE corner of the map for $15 or try to find a cheaper spot somewhere off campus and hike in.

Please post a comment here if you're planning to attend or thinking about attending, so Jim has some idea how much space he and his goons need to clear out on Adams Field.

As far as the rest of it, it's BYO everything. Haul in whatever beverages/food/chairs/activities you need to occupy yourself while engaging in engrossing conversation with your fellow TOCers for a few hours. Jim says this week is his annual Bacon Tailgate, so factor that into your plans.

We'll have name tags on hand to make the introductions slightly less awkward. (I'd go ahead and plan on calling "intrpdtrvlr" by his actual name; "Josh" is somewhat easier to pronounce, particularly when you've been drinking.)

Post any questions or suggestions in the comments. FWIW, tickets to the game are going for well below the face value of $80. (In retrospect, tagging this as a higher-cost big-opponent game wasn't the best move by the athletic department. Not that I take a victory for granted. Or, really, that I take anything at all for granted this year. Never mind. I take it all back. Since we haven't blown anyone out at home to date, every game should cost $80. Here's to tightly-played, emotionally-engaging-for-60-minutes, competitive football!)