Hooray for statistically significant differences with the other team (big box): 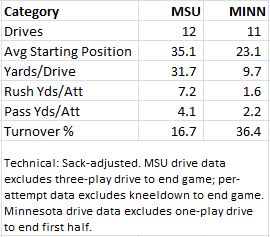 Defensively, it does get any better than that, practically speaking--although Minnesota was actually in the realm of decent on third-down coversions (5-14) or their numbers would have been even uglier. Only 4 of Minnesota's 49 plays from scrimmage went for 10 or more yards, while 11 plays resulted in negative yardage or a turnover. The MSU defense posted a disruption percentage of 32.7%, even with zero QB hurries scored (on either side of the ball).

Le'Veon Bell and the rushing game was obviously the story on offense. This was only the third game this season in which MSU has been over four a half yards per rushing attempt (6.3 vs. Eastern, 5.5 vs. Nebraska). MSU ran early, ran often, and ran the defense ragged.

The passing game was, on the other hand, putrid. More on that after this special interlude: Yay for the return game finally make a difference-making play. Can we retroactively apply to it a different game, though?

Back to the passing game. Super depressing chart: 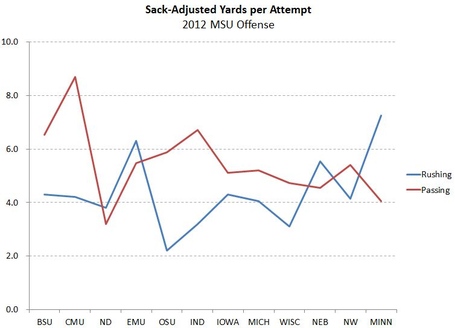 Things have been in decline ever since I said Hello! to Andrew Maxwell's arm. The last few games have been particularly bad. Maxwell's completion percentage has been below 50% in each of the last three games--playing against defenses that aren't exactly powerhouses--and has thrown 4 interceptions in the last two games, after throwing just 3 in the previous nine. The shoulder thing gets him a half a pass on Saturday, but this has been a season of decline rather than improvement for the first-year starter.

The receiving threats have improved at least incrementally--both in quantity and quality--as the season has gone along, but it hasn't shown up in the numbers. Some of this still rests with the offensive line. As often as not, Maxwell doesn't appear (to my just-a-caveman eyes, at least) to have time to get through more than his first read. Still, there isn't anything in the numbers that doesn't suggest everything about the passing game needs to be re-evaluated--including potentially opening up the QB job to a spring competition.

Another chart, because charts are free. The defensive version: 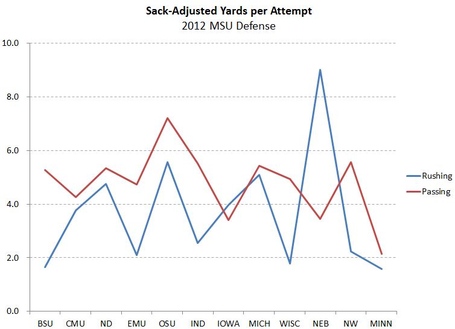 The rush defense was up and down. Oddly, the downs (i.e., offensive ups) came against teams with running QBs--which MSU had excelled against the last couple years. I'll leave it to the Xs-and-Os guys to figure that one out. The pass defense was pretty darn solid all season, excepting the Ohio State game. Sacks were way down (16 in 12 games, vs. 45 in 14 games last season), but that never seem to come back to haunt the team, at least on a full-game basis.

Stuff I was right about. Who has two thumbs and predicted Ohio State would have the best record in the league? This guy. Also, this:

ON THAT NOTE EVERYONE NEEDS TO STOP PICKING MSU TO GO TO THE ROSE BOWL. WE'VE GOT FEWER QUESTION MARKS THAN OTHER CONTENDERS BUT THEY'RE BIG QUESTION MARKS AND IT MAKES ME NERVOUS AND I DON'T LIKE IT SO STOP IT.

When I use ALL CAPS, it means I'm serious, folks.

Stuff I was wrong about. Everything else in that post. I think a complete reversal of my predicted standings would have been closer to the final standings

Also, freaking out about Le'Veon Bell's workload was the wrong thing to freak out about. Bell has finished the regular season with 37 more rushing attempts than any other player in the country (39 more than Montee Ball). Obviously, he still looked pretty effective on Saturday. I never put that stuff in ALL CAPS, though, so we won't count it against me.

On to that weird part of the year where I forget football season still exists for a month until the afternoon before the bowl game. I continue to maintain that the closest historical equivalent to college football bowl games are the old baseball barnstorming tours.