Is Tom Izzo serious about adjusting MSU's starting lineup down a notch?

"Maybe my experiment with two bigs is over," Izzo said after the ball-screen defense led to open dribble penetration, which led to open three-point shooters and 9-for-16 Miami accuracy from long range.

The implication is that Izzo is thinking about pulling either Adreian Payne or Derrick Nix from the starting lineup (probably Payne) and using a non-big in the 4-spot--Branden Dawson being the obvious pick to fill most of those minutes.

Now, I think Izzo may have been overreacting slightly. Miami was extraordinarily successful shooting the ball both from beyond the arc and at the free throw line (16-18). If their shooting percentages had been nearer their season averages, MSU either wins or loses narrowly and Izzo wouldn't have had to reach quite as far to find weaknesses in his team's performance. His next complaint was that Keith Appling hadn't played that well, despite 15 points, 5 rebounds, and 4 assists (plus 3 turnovers).

Still, I do think it's likely we see more of the smaller lineup configuration as the season goes on. Even in the Miami game, the lineup on the floor when MSU was making its last push to get back in the game was Appling/Trice/Harris/Dawson/Nix. I think that's the go-to lineup in most cases.

And, despite Izzo's well earned reputation as a rebounding-first coach, he's leaned toward using a smaller player in the 4-spot through most of his coaching career. Here's a list of the MSU player occupying that spot in the lineup among the five players averaging the most minutes per game in each season since Izzo's first Big Ten championship: 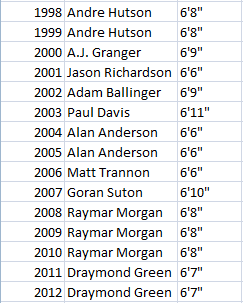 Those first three championship teams all had a traditional two-big-man setup--first Hutson/Smith and then Granger/Hutson--but since then, more often than not, Izzo has put a more flexible player in that spot in the lineup. Richardson, Anderson, Trannon, Morgan, and Green were all guys who, like Dawson, could guard both on the perimeter and in the post. And the fact that Izzo recruits wings who can rebound allows him the luxury of tamping the average size of his lineups down a bit.

So I think the team was likely to end up in this spot eventually anyways, even if Payne and Nix had both remained nominal starters. The good news is that, with Gary Harris and Travis Trice back, Izzo now has all 11 pieces back in play and can match up better against different-sized opponents while also looking to whittle the playing rotation down to probably 9 guys.

The losers in terms of playing time if he really pushes hard toward the direction of smaller lineups are Alex Gauna and Matt Costello, who would presumably be battling to serve as the emergency foul-trouble options at the 5-spot while occasionally getting minutes at the 4-spot against bigger opponents. There's more than enough depth among the perimeter guys--barring any more injuries--to backfill those minutes from the other side. And, the smaller lineup has benefits in terms of pushing Branden Dawson closer to the hoop, where his strength continues to be at this point in his career.

Bigger picture, the start to the season certainly hasn't been a smooth one, but I think we can chalk it up as an acceptable one under the circumstances. Despite the series of early injuries to hit the team, MSU has one clear quality win (Kansas) and another win that's looking better and better (Boise State). The two losses shouldn't look awful at the end of the season, as they came away from home against two top-fiftyish teams. (Edited: Also, note that Texas Southern recently took a ranked Colorado team to double OT. We won't speak of the narrow escape against Louisiana-Lafayette.) In sum, the start to the season has been well within historical parameters for the program.

The team has established two statistical strengths that are keys for any Izzo team on both ends of the court: rebounding (37.5%/24.9%) and two-point FG% (52.6%/41.9%). Meanwhile, the areas of glaring weakness--turnovers and three-point shooting--should be at least partially addressed by the returns of Harris and Trice, as they were against Miami. Harris' individual TO% is just 11.7%, which matches Trice's number precisely (although Trice was up over 24% last season).

Izzo now gets five cream puffs in a row (all ranked lower than #200 by KenPom) to tinker with the lineup against, with the Texas game and then Big Ten slate to follow.