Mining the Box Score: The numbers and the numbness

Analyzing the numbers from yet another frustrating Michigan State football loss

Share All sharing options for: Mining the Box Score: The numbers and the numbness

The numbers, as if you care (big box): 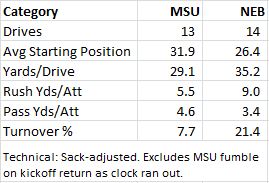 Another coin flip game, except that the three turnovers MSU should have pushed the coin to MSU's side. A return TD would have done exactly that. But we've already been over that.

Michigan State's rushing yards per carry were a full yard higher than they've been against any non-EMU opponent this season. But it still didn't feel like MSU was dominating the line of scrimmage in the running game. Le'Veon Bell's 36 carries, charted: 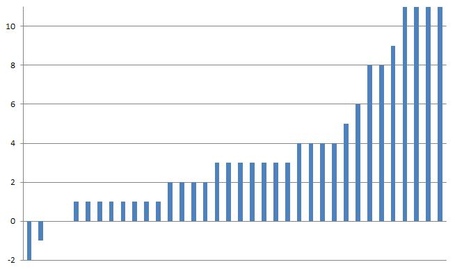 Those four bars at the far right represent carries that went for 11, 23, 26, and 40 yards. Despite averaging 5.2 yards per carry, only 13 of Bell's 36 carries went for 4 or more yards. Three of Bell's six carries that ended up in the 4-to-7-yard range actually came on final drive of the game. Bell was either picking up a first down (or very near a first down) or still leaving the team in a clear passing situation on 2nd and 3rd down; there wasn't much in between. (Both of Nick Hill's carries [yay!] were long gains, too.) My take: Dan Roushar's playcalling may actually be the main source of credit for the long runs Bell was able to break. It doesn't look like it was a sudden resurgence by the offensive line.

The passing game was, of course, absolutely horrid. Who do I blame for that? Everyone. The passing offense hasn't even sniffed 6 yards per attempt since the Indiana game. The Nebraska defense posted 11 total disruptive plays (6 pass break-ups, 5 QB hurries) on 27 pass attempts by MSU. Maxwell is still making some bad decisions, but he's also got very little time and very little separation to work with. (Overall, the disruption percentage numbers were a draw: 22.4% for the MSU defense, 21.4% for the Nebraska defense. )

On the other side of the ball, the MSU defense did everything well enough except for the one thing it's always done very well: containing a running quarterback. Netting out the two sacks MSU posted, Taylor Martinez rushed the ball 15 times for 234 yards. That's 15.6 yards per carry. Containment was lost, needless to say.

The defense did defend Martinez about as well as you possibly could when he tried to use his arm. Except for that final drive, of course. I really don't get only rushing three when the opposing receivers have lots of field to work open into and then max blitzing when the quarterback is almost certain to get rid of the ball within a couple seconds. But I'm just a caveman.

At the time, I was actually cool with punting the ball on 4th-and-2 at the end. But my judgment may have been as bad as Mark Dantonio's was on that call. (The low snap and resulting touchback didn't help.) I think the new rule of thumb should be: If you can do something that gives you a 50% chance or better of totally locking in the win, do it.

At the end of the day, the way we lost is perhaps more frustrating than the loss itself. Losing always sucks, but--and maybe I'm revealing my true non-football-guy colors here--I don't see a lot of difference between 8-4 and 7-5. Momentum, I suppose, for whatever that's worth. The season was already lost. If you can still feel pain, I envy you. If we lose one of the next two--which is certainly a possibility--then I'll move on to the next level of freaking out.

Get to a bowl game. Practice for the extra month. Set things up for next year.

That's all I got. No boldets for you. Too many short, dismissive sentences.