Does the 2012-2013 Michigan State basketball team have all the pieces to be a national contender?

Prefacing. I've now spent five years (over)analyzing Michigan State basketball statistics. (Is there some way to turn this into an online Ph.D.?) That analysis has yielded one overarching theme: It's all about depth. (This connection was originally identified by Mr. Gasaway, so I guess my thesis doesn't actually qualify as original research.)

More so than other college basketball coaches (most prominently from our view, Bo Ryan), Tom Izzo needs about nine guys he can consistently run out from game to game. This allows the team to play a swarming help defense, crash the boards with abandon, and push the ball in transition. Teams that have fallen short on the depth scale have been forced to play a cheapened version of Izzo-ball and the results haven't been nearly as good. 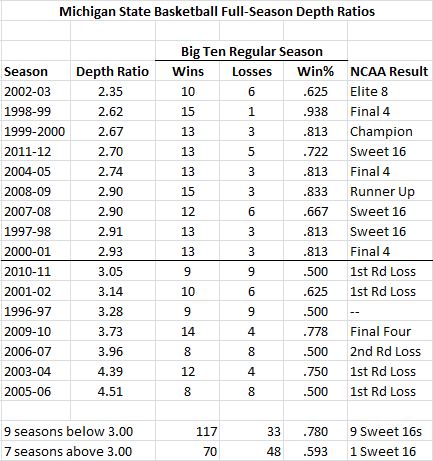 Depth ratio is equal to the minutes played by the top two players in the rotation divided by the minutes played by the eighth and ninth players in the rotation. Lower is better. The statistic effectively aggregates answers to two questions: Are your top players getting a decent amount of rest in the course of each game? And are there at least four good options off the bench--usually two on the perimeter and two on the interior--that can contribute from game to game?

Historically, the magic number has been 3.00--the equivalent of the top two guys playing 30 minutes/game and the eighth and ninth guys playing 10 minutes/game. No Izzo coached MSU team below that threshold has ever lost more than 6 games in Big Ten play or failed to advance to at least the Sweet Sixteen.

To be sure, the causation probably runs in both directions here. A better performing team is going to player fewer close games, allowing the coach to play his bench more liberally. But I think long-time observers of the MSU basketball program will agree that (1) Tom Izzo doesn't play guys just to play them and (2) when he's got enough players he trusts, he's going to rotate them with wild abandon.

Great, but can you see it ahead of time? The simplest statistical predictor of depth is returning player minutes percentage. 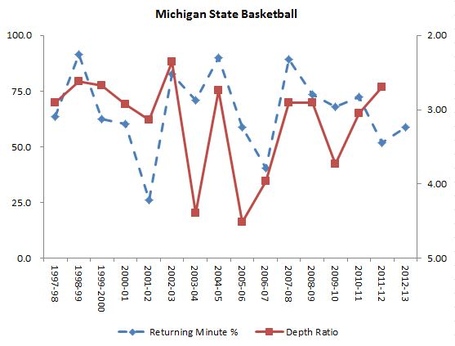 If you have a solid base of experienced players coming back, you don't have to find as many new bodies to fill out the rotation. Unfortunately--for analytical purposes, at least--the correlation has broken down over the last few years:

Going into each of the past two seasons, I've thought the team looked pretty deep. I was wrong once (like, almost as wrong as you can be). I was right once (or at least closer to right than some other observers). I can only hope reading these previews is more entertaining than flipping a coin. 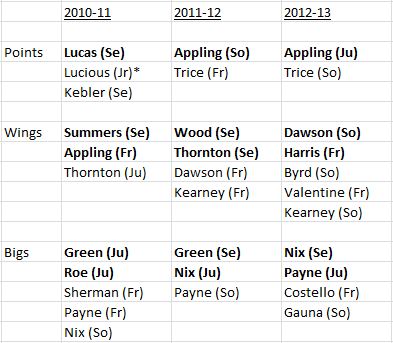 Do we gots it this year? So the first major question going into the 2012-2013 season, given that the team loses a similar number of player minutes, is whether we can expect the same kind of transition as we got last year: freshmen contributing immediately and sophomore/juniors making solid progress. Tentatively: All signs point to yes.

Gary Harris looks every bit as college-ready as Branden Dawson was. Matt Costello reportedly already has the kind of motor Tom Izzo looks for in his big men, with Alex Gauna as another serviceable option in a pinch. (Izzo's implying there may only be 50 minutes to go around for pure bigs.)

And there's enough extra depth on the perimeter that, of Russell Byrd, Brandan Kearney, and Denzel Valentine, only one needs to be a real scoring threat and another needs to just do the other stuff well. I'm really hoping Byrd just has a case of the pre-senior-Thorntons and that it's cured more quickly than Thornton's case was. Kearney is the do-no-harm option. Valentine will do harm but maybe make quite a few changing-the-possession-for-the-good plays, too. If nothing else, the plethora of guard options will allow Izzo to apply man-to-man pressure in the backcourt to wear opponents down.

That evaluation is certainly speculative on my part, but that's the nature of the preseason preview beast, my friend. And the best attempts at quantifying the level of performance we should expect from this year's MSU team based on the hard data back up my speculation: Mr. Pomeroy pegs them at #4 nationally, and Mr. Hanner has them at #5. The numbers seems to think we've got the numbers.

Big picture, the positive spin for the program is that maybe Izzo has been able to hit the sweet spot on recruiting again--balancing high-profile recruits who can have an instant impact on the court without then going pro early with lesser-heralded guys who show solid development over the course of their careers. That would lead to a permanent break in the cycle of correlation between returning minutes and depth ratio, but without going to a Kentucky-like extreme. A topic for another post, perhaps.

Plenty of men, who's going to be THE man(en)? That still leaves a second major question lingering over the upcoming season: How do you replace arguably the third greatest player in the program's history? Draymond Green did it all last year: scoring, playmaking, rebounding, defending.

Some of that won't be as hard to replace in terms of pure quantity. There are six pretty solid and varied scoring options already evident (Appling/Trice/Dawson/Harris/Payne/Nix). Defensive rebounds are arguably easier to replace than other statistical contributions. And Dawson remains as a versatile defender to move around on opposing forwards, with Appling continuing as the lockdown guy on the perimeter.

But you still have to figure out how all the offensive parts fit together, and who has the ball in his hands at key moments. Scatterplot (not pictured: Brandan Kearney and his 8.6% possession usage rate): 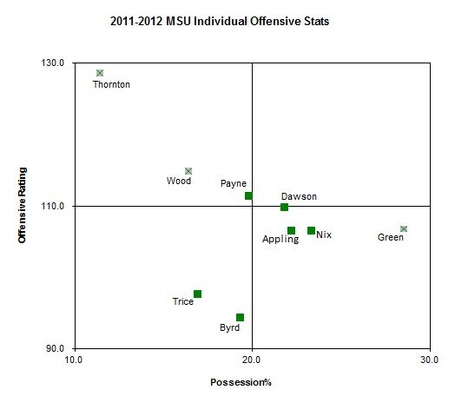 The team loses both its high-usage/moderate-efficiency star and its two low-usage/high-efficiency role players. Keith Appling can take on some of the high-usage burden, but he's not going to replace Green's playmaking skills entirely on his own. One of the Nix/Harris/Dawson/Payne group will need to emerge as option 1b. I've listed them in my predicted order of likelihood. Nix has been the guy in the exhibition games, but with 10 turnovers in the two exhibition games, his decision making will need to get much better quickly. Everyone else then needs to make a dash toward the upper, left-hand corner of the scatterplot.

The transition game should help ease the, um, transition. The Appling/Harris/Dawson trio has the potential to be as good on the break as any set of guards during the Izzo era. That should take some pressure off the half-court offense, where an adjustment period will be necessary.

Now, for the big finish. In a lot of ways, this team reminds me of the 2000-01 team. Obviously, last year's team didn't win the national championship. But this team is replacing an all-time great (the 1999-2000 team had two of those), but has a steady hand in the backcourt to lead the way (Appling/Bell), a veteran big man to hold down the fort inside (Nix/Hutson), and plenty of young talent to make the rebuilding project potentially a short one.

The team is by no means a lead pipe lock national contender. The rotation looks solid but could fall apart for any of several reasons. (Mitigating factor against complete collapse: chemistry, baby.) The early Costello and Kearney injuries mean the team is starting a leg behind in terms of establishing a regular, deep rotation.

If I were going to make a bet, I'd say the team finishes the regular season around the #14 spot the human polls have them pegged at, if only because the Big Ten is going to be such a slog this year. Four of KenPom's top five teams, and 5 of his top 11, are from the Big Ten. His numbers are usually pro-Big Ten, but not that pro-Big Ten.

The nonconference schedule sets up nicely, with two KenPom top-15 teams (but no monster foes), two other top-50 opponents (including Friday night's opponent), and one other top-100 opponent (2012 all-purpose arch-Spartan nonconference foe Boise State). The team will be challenged, but hopefully not overwhelmed, for the next two months. KenPom pegs MSU as at least a slight favorite in all 13 nonconference games. This is a team that is likely to perform unevenly early on but has the potential to peak late. Just the way we like it--or can at least live with it--right?