Recap: Watch out for that first step

Share All sharing options for: Recap: Watch out for that first step

Before we proceed, let me stipulate to two things. First, regardless of the game outcome this was a great event. When players are handing their jerseys to injured military personnel after the game, it's not hard to find the larger perspective. (Also, with neither carrier game scheduled for tonight making it to a conclusion, playing inside a military facility is probably the more prudent way to go for college basketball teams doing these kinds of events in future seasons.)

Second, yes, this always happens, and Tom Izzo usually finds a way to get the team in position to succeed by March. This isn't football. There's no sense panicking over a single bad performance.

Still, losing in November is not a prerequisite for winning in March. In fact, establishing a higher baseline level of performance in November might actually lead to more success in March if the team can improve by the same amount from the higher baseline. It was disappointing to see the team come out in another high-profile nonconference game and get knocked completely on its heels. A win against a similarly-young team with lesser levels of overall talent wasn't an unreasonable expectation.

It's pretty clear that the book on MSU is that, early in the season, you can simply overplay them on the perimeter to start the game and they won't know how to react. MSU had turned ball over 4 times and was down 20-6 before they even got to the second media timeout. Izzo's rep for detailed gameplanning is unmatched, but some generic strategies against intense man-to-man pressure would seem to be in order. Eventually, the other team tires out from playing extended defense and you get to run your sets. It'd be nice not to be down double digits at that point.

Now, this is indeed a young team. So it probably deserves a little more slack than previous Spartan squads that have stumbled in early contests. The fact they were able to scrap back into the game speaks well of the team's psychological make-up. And the Trice injury didn't help, as it forced Izzo to go with two freshmen on the floor in the final minutes.

StatSheet doesn't appear to be geared up for the new season yet, so no four factors graph for you. Instead, you get a less-elegant-but-still-effective four factors Excel clipping (official box): 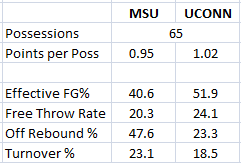 Given the start the Huskies got off to--making 14 of their first 17 field goal attempts--the final defensive numbers are actually fairly impressive. MSU held UConn to 5-18 shooting on two-pointers in the second half (but 3-7 on three-pointers). The halfcourt defense wasn't perfect, as the team lost track of good three-point shooters several times, but it was fairly solid when it wasn't facing uncontested layups off Ryan Boatright steals. Shabazz Napier was the killer, scoring 25 points on just 16 field goal attempts.

Rebounding kept MSU in the game on the other end, as Branden Dawson and Derrick Nix combined for a whopping 15 offensive rebounds. Ultimately, they couldn't turn enough of those second chances into points, though. The team shot just 42.6% on two-point attempts and 23.5% on three-point attempts. MSU's final turnover percentage figure was just bad, not hideous, but too many of them led to easy baskets on the other end.

Given the perspective of my season preview piece, perhaps as big a concern as any is how little production the team got past its first 6 or 7 players. Getting Costello into the rotation may help some, although it sure looks like we're going to see Dawson much more at the 4-spot than the 3-spot.

The good news is that there's not a lot of time for the team to dwell on this loss. The bad news is that the next contest isn't going to be any easier. The team won't be able to afford falling behind by 16 again. Tuesday night vs. Kansas; 7:00 on ESPN.