An evening in yesteryear

Share All sharing options for: An evening in yesteryear

I started following Michigan State basketball early in the Steve Smith era, so I technically must have watched or listened to the team play at Jenison Fieldhouse. But I never attended an MSU game until I stepped on campus as a freshman in 1993. So, to me, MSU basketball is something that has always occurred at the Breslin Center. I did play one IM basketball game in the fieldhouse during my college years, but other than that, I'd spent almost no time inside the place.

That made tonight a very cool experience. It reminded me of going to a baseball game at Wrigley Field. If you let your mind drift and didn't focus on the details, it could just as easily be 1953 as 2013. My son's and my seats were in the second-to-last row of the second level (at midcourt), but we were closer to the action than half the seats in the lower bowl at Breslin. I could get at least a small sense of how that place must have rocked in 1979.

On top of that, it was fun to hear the names and see the faces of players from the Heathcote years that I hadn't thought of in at least a decade: Kris Weshinskey, Jon Garavaglia, Daimon Beathea. These were the guys that introduced me to college basketball. (Whatever happened to Kirk Manns? Purest three-point shooter ever.)

The basketball itself was, of course, so-so. A lot of awkward looking fast break attempts, intermixed with 50-year old white guys trying to get a shot off. The "Home" team, AKA The 2000 National Championship Reunion Team, beat the the "Away" team, AKA The Steve Smith All-Stars, 125-118 in an estimated 134 possessions (note: not a real estimate). The guys who have played in the NBA within the last few years--Charlie Bell, and Morris Peterson--were the most impressive looking in terms of pure skill level. And you'd swear Steve Smith was a lot less than 7 years removed from retirement. He came out looking to score early and pushed things at the end to try to get his team back into the game, before the 2000 guys checked back in to close it out. Mateen Cleaves got the biggest ovation during the player introductions but is clearly out of game shape at this point.

Arbitrary list of other guys to make an impression: Ray Weathers (game-high 20 points), Aloysius Anagonye (still playing professionally, I guess), and Matt Steigenga (multiple dunks) for the Away team; David Thomas (sweet jumper) and DuJuan Wiley (dunk of the game) for the Home team. It was fun to see the All-Time Izzo Walk-On All-Stars all on the floor at one point for the Away team: Steve Cherry, Tim Bograkos, and Austin Thornton. Current MSU assistant Dwayne Stephens hit two consecutive bankshots at one point, one of them from beyond the arc. Kevin Willis tried a little too hard, missing a bunch of jumpers.

All in all, a great start to the Jenison weekend. I think it would lose its novelty to play an alumni game too frequently, but it'd be great to see something like this every 10 years or so. 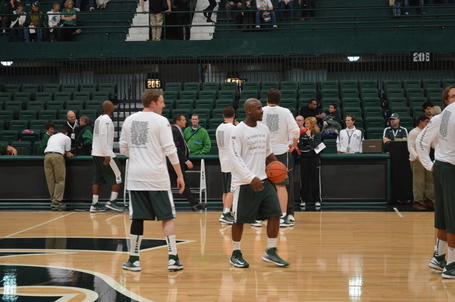 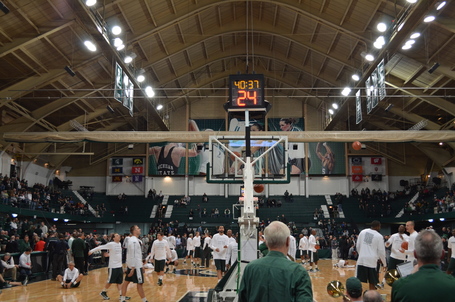 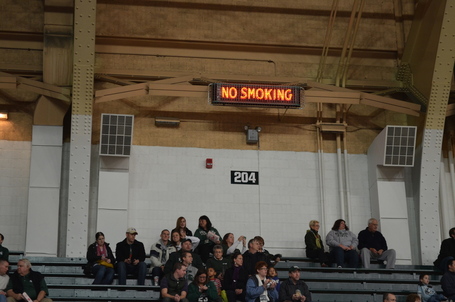 Predates the law, I think 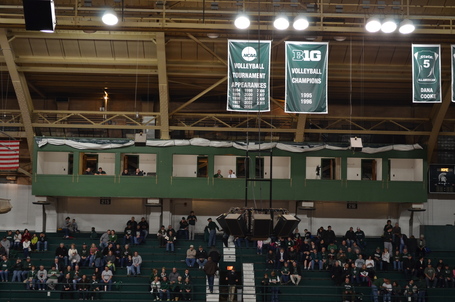 One of the press boxes; you can see the mesh box they used to use to send messages across the arena on a wire on the cross beam above the third window to the left (still works; they were goofing around with it before the game tonight) 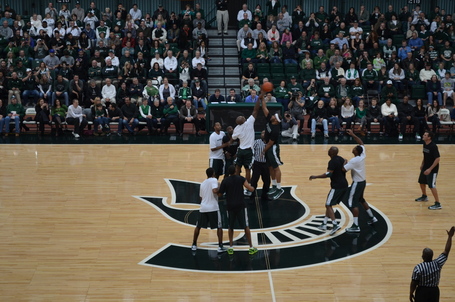 The tip; "Home" team in white 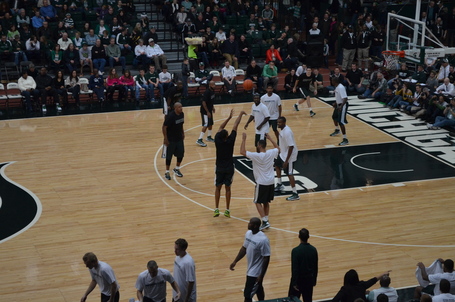 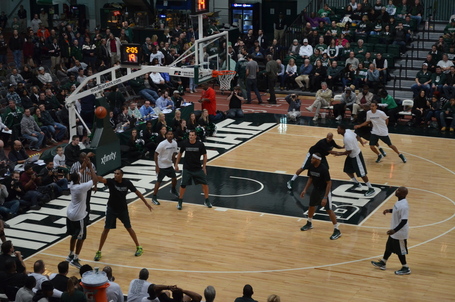 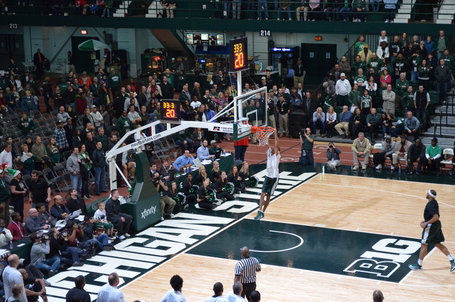 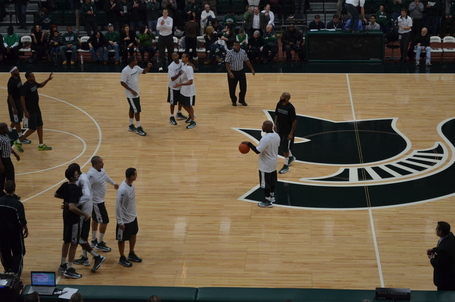 Mateen dribbles out the clock