Last week, I set the dial at "Uneasy Overanalysis." This week, following two weak offensive performances against low-level competition, I'm turning the dial up a notch to "Active Disquietude."

Through 12 games, only four of which came against KenPom top-100 competition, the Michigan State offense has cracked the 110 offensive efficiency mark just 3 times--the same number of times it's fallen short of 100. Considering that 15 of MSU's remaining 19 regular season games will be against teams with defenses in KenPom's top 50 nationally, there is cause for concern. I, of course, would like to run through those concerns using scatterplots. (If nothing else, it provides some distraction from the Jabari-watch.)

The early season issues with turnovers are no surprise, of course. This is the eternal path of the Izzo-coached team. But I'm concerned this team isn't showing enough in the way of progress. Chart (of the non-scatterplot variety): 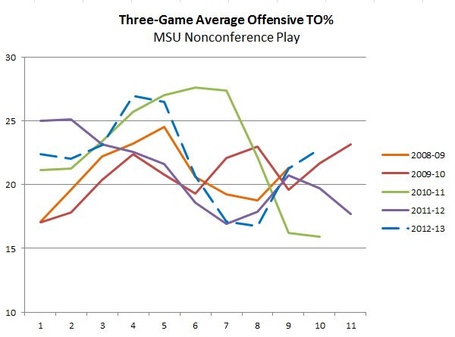 You obviously don't want to read too much into this. The strength of schedule over the last few games of nonconference play is going to vary from year to year, and the direction the line has moved in at the end of nonconference play hasn't always been predictive of future performance. But the fact that the team's turnover percentage has been 23%+ in 3 of the last 4 games, even with Gary Harris and Travis Trice back in the lineup, is certainly not a positive indicator.

The big question entering the season was whether the team could find an offensive identity to replace last year's Draymond-centric attack. One possibility was scoring more in transition, using Keith Appling's speed and the athleticism of Harris and Branden Dawson.

Dylan was able to rustle up some Synergy data on transition scoring by Big Ten teams, and the results are not encouraging: 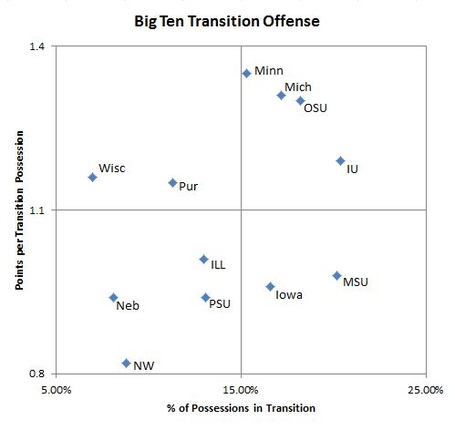 The data confirms Con-T's finding that MSU is, in fact, pushing the ball on offense at a healthy clip. They're basically running as much as Indiana is. The problem is that they're doing it much less efficiently--actually scoring fewer points on average than they are in a standard half-court possession. I don't have a great explanation for this, given that Appling and Harris have scoring quite efficiently. Dawson's turnover issues are probably the biggest factor. So far, though, transition scoring hasn't been the solution we'd hoped it'd be.

If you're not scoring in transition, then you have to score in the half-court offense. And it's harder to hide weak links there. Unfortunately, the guys at the bottom of the rotation have been definitively weak so far: 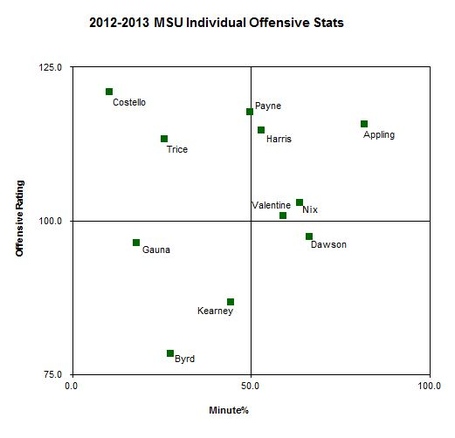 That's a slightly different formulation of the individual offensive efficiency scatterplot, using minutes percentage rather than usage rate on the horizontal axis. Russell Byrd's moment has, I think, passed as far as this season is concerned. The problem is that, while Brandan Kearney's defense makes him a better overall option, he's been almost as bad on offense. His career shooting numbers now stand at 44.2%/27.8%/43.8% (2pt%/3pt%/FT%), and he's turning the ball over at a high rate, too (26.1%). He's firmly in the rotation at this point, but I'm skeptical he's going to add much offensive value in conference play.

Meanwhile, Alex Gauna is viewed as the better offensive option up front, but outside of hitting some jumpers (56.5% on 2-pointers), he's not bringing a lot to the table on offense. He's turning the ball over on 28% of his individual possessions and only grabbing 4.4% of available offensive rebounds.

The hope, at least among the TOC staff, is the #FreeMattCostello movement. Matt Costello currently leads all MSU players in offensive rating, free throw rate, turnover percentage, and block percentage. And he ranks second in defensive rebounding percentage. Those numbers have come in just 49 minutes of play, some of which have been during garbage time, but I think they clearly merit more of a look at Costello. Tom Izzo sort of implied he regretted not playing Costello against Bowling Green; we'll see what that translates into over the next few games.

Big picture, I worry that the depth Izzo needs to really make his team go isn't emerging. The starters have been good--Appling and Harris, in particular--but I don't think they're good enough to cover up a productionless bench.

For all the issues with MSU's offense, the defense has been quite good. The team has held 7 of its 12 opponents below the 90 mark in terms of efficiency, and only one opponent (Miami) has gotten over 110. This is all the more remarkable when you consider the number of easy baskets the team has conceded off turnovers: 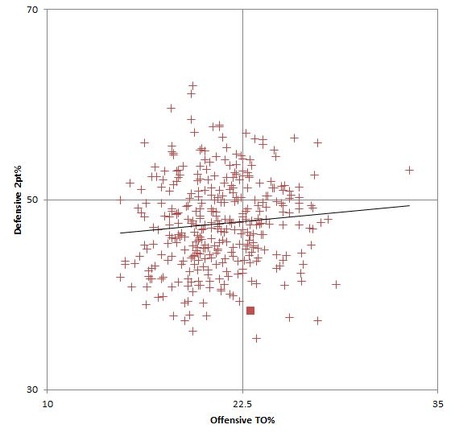 Teams that turn the ball over a lot tend to give up a higher percentage of made two-point field goal attempts on the other end. MSU (the bolded square) is managing to buck this trend. The team ranks seventh in the country in two-point field goal defense at 38.3%. Obviously, that number will go up as the schedule gets tougher, but if MSU can somehow get the turnover issues under control, MSU's defense could be very, very good, even by Big Ten standards.

There are miles to go before we sleep, but I'm less optimistic than I was a few weeks ago. KenPom currently projects MSU to go 10-8 in Big Ten play. That wouldn't be a complete disaster given the strength of the league this year. But it's obviously a step below "title contender" and not as far as we'd like above "bubble team." We'll learn a little more Saturday against a Texas team that looked quite capable last night, despite their more-extreme-version-of-MSU statistical profile (#4 on defense, #174 on offense). Here we go a gauntleting.