Share All sharing options for: Adventures in small sample sizing

We're now 25% of the way into the regular season. That's still very early for looking at statistical data--particularly for individual players since they only factor into a fraction of the team's overall possessions from a statistical standpoint. But who can resist? Take the oath and let's dive into the numbers. To avoid overanalysis, we'll stick to two numbers per player--one good and one not so good. Tempo-free glossary covering individual stats is here.

Keith Appling
Good: 42.9% three-point FG%. That's a major relief after Appling finished last season on an 8-48 cold streak from deep.
Not so good: Not much to complain about, but his free throw rate has dipped slightly from last year--42.2 vs. 55.4.

Branden Dawson
Good: 5.4% steal rate. That's off the chart for a Tom Izzo-coached player.
Not so good: 23.2% turnover percentage. You're going to start to sense a theme here.

Gary Harris
Good: 63.6% two-point FG%. Dude can finish.
Not so good: Rebounding numbers (about 7% on both ends) are meh for a big guard.

Derrick Nix
Good: 20.1% defensive rebounding percentage. That's a major boost from last year's figure of 12.7%.
Not so good: 24.8% turnover percentage. Instincts have to improve when he's doubled in the post.

Denzel Valentine
Good: 23.4% assist rate. Best pure passing guard for MSU since at least Drew Neitzel. (Just for funsies: All-Izzo-era pure passer team: Cleaves, Neitzel, Valentine, Green, Suton.)
Not so good: 26.4% turnover percentage. Still working on dialing it back a bit when the play's not there.

Adreian Payne
Good: 32.0% defensive rebounding percentage. Started off so good on the defensive boards he got to be one of the examples in Pomeroy's oath.
Not so good: 23.4% turnover percentage. This section is booo-ring.

Brandan Kearney
Good: 2.0 fouls committed per 40 minutes. Reliable defender, which is a pretty good thing to fall back on.
Not so good: 36.5% effective FG%. Izzo's clearly encouraged him to shoot more, but not a lot of shots are dropping.

Alex Gauna
Good: 50.0% two-point FG%. He's hit a few jumpers to keep defenses honest.
Not so good: 31.7% turnover percentage. He gives the ball a way a lot before he can get a shot off.

Travis Trice
Good: 7.5% turnover percentage. Way down from 24.3% last year, making him a steadying presence going forward, hopefully.
Not so good: 11.0% assist rate. Also down from last year (18.2%) so some of it's a result of being less aggressive with the ball in his hands.

Matt Costello
Good: 19.3% defensive rebounding percentage. All his rebounds have come against weaker opponents, but that's still a very solid number.
Not so good: 33.3% two-point FG%. Has rushed his shots at times when he's gotten the ball near the rim.

MSU's team efficiency numbers (which still partially reflect KenPom's preseason prediction data) confirm that's it's been easier to replace Draymond Green on defense (#6 in the country) than it has been on offense (#38). Nix and Payne both taking big leaps (pun!) on the defensive boards has been the major factor there. 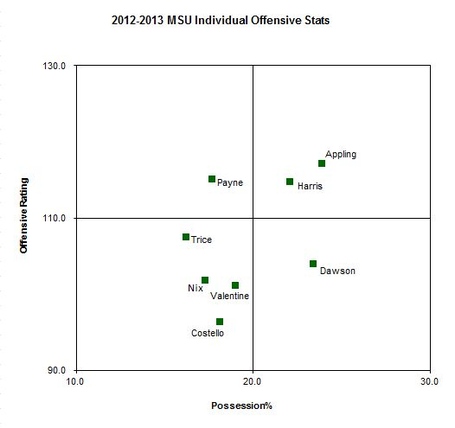 Appling and Harris are doing an excellent job as the new Batman and Robin on offense. Dawson, Valentine, and Nix need to cut down on the turnovers and move toward the 110 efficiency mark in nonconference play (which is going to roughly correspond to a point per possession once we hit Big Ten play).

The other major issue is the guys who don't show up here: Kearney, Byrd, and Gauna all have offensive ratings below 90 right now. Along with Costello, two of those guys (and not both the post guys) are going to need to find some kind of groove on offense if Izzo's going to have a legitimate nine-man rotation to work with.