Did not see this coming: 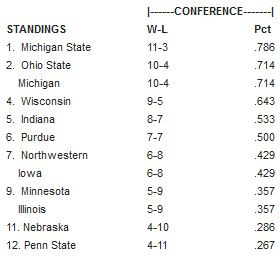 78% of the way into the Big Ten schedule and MSU is in the driver's seat. Now, that still leaves four games for things to go in any number of directions. But, to date, the team's results have been better than any objective observer could have predicted and any biased observer could have hoped for going into the season. (Now, just imagine if that overinflated ball could have dropped into the rim just one more time for MSU in Champaign. Sorry, deep breath, again: better than we could have hoped for.)

SpartanDan will have his more rigorous take on the state of the Big Ten race up tonight, but for now, I thought it would be fun to take a graphical look at how the three contenders for the conference title have gotten to where they are now. After the jump, I've charted each team's offensive and defensive efficiency marks on a game-by-game basis and then applied polynomial trendlines (order of 2, meaning they can only bend once). This is an exercise we've undertaken in the past--mainly because the charts are fun to look at/converse about. I don't pretend they have any predictive power. But, if we're going to nervously speculate about title chances, it's as good an approach as any. 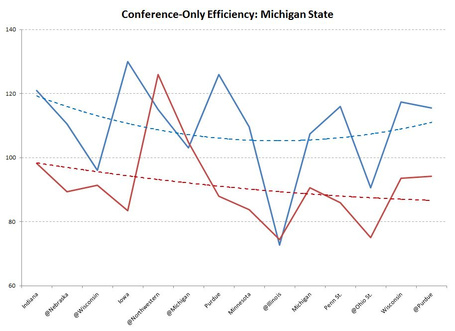 Despite the somewhat odd results in Evanston and Champaign (OK, the somewhat predictable result in Evanston and the staggeringly strange result in Champaign), MSU has actually been pretty consistent over the 14 games. The defense has gradually improved, while the offense has dipped below the 100 mark just three times (twice in wins). The results over the last 5 games--3 of which have come against the best competition the leagues has to offer--have been downright smashing. MSU now stands neck and neck with Ohio State in terms of overall efficiency margin. If the team can stay the course vs. Minnesota and Nebraska, it comes down to winning at least one of the final two--at Indiana and home to Ohio State--neither of which will be anything resembling a cakewalk. 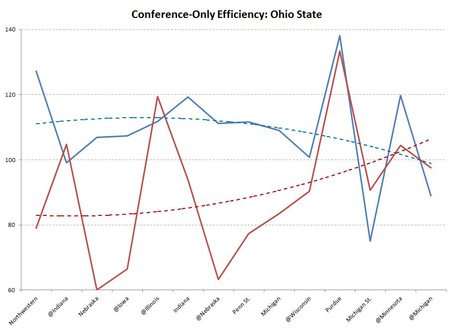 Other than a couple defensive lapses on the road--vs. a red hot Indiana team and a red hot Brandon Paul individual--Ohio State was humming along just like a national title contender should through 10 conference games. Over the last four games, however, they've looked downright mediocre. Their trendlines have actually crossed now. I think you'll see that trend reverse itself pretty quickly, but the Buckeyes have revealed themselves as mortal. They'll need to regrasp their earlier immortal-looking ways down the stretch (Illinois, Wisconsin, at Northwestern, at MSU) to win the outright title that looked to be in the offing until not too recently. 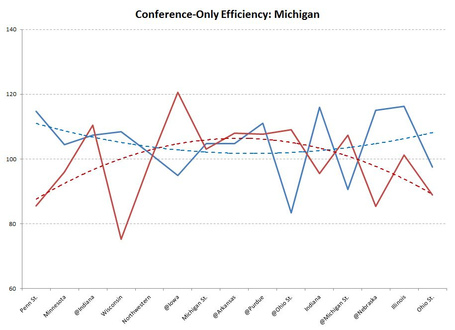 Michigan's been a little lucky--both in terms of scheduling (no game in Madison) and game outcomes (5-1 in conference games decided by 5 points or fewer)--but they're also building momentum at the right time. That momentum makes their remaining four games look less imposing than they would have looked a few weeks ago. Michigan will be favored in all four (at Northwestern, Purdue, at Illinois, at Penn State), although a loss wouldn't be a complete shock in any of the games.

Two bonus charts, for the two teams with the potential to play major spoiler since they play both Michigan and Ohio State twice in the closing weeks. 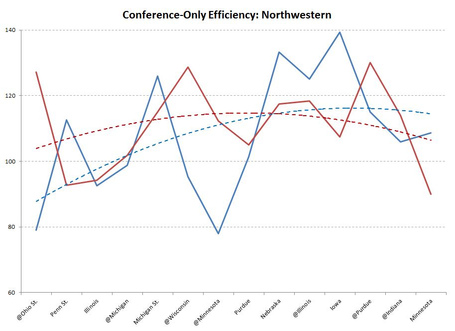 Part of it's scheduling (their three games against the contenders to date came in the first five conference games), but the Wildcats do seem to be improving moderately as the season progresses. If they can win 3 of their last 4, which would require beating either Michigan or Ohio State at home, the since-the-dawn-of-recorded-history NCAA Tournament drought would at last come to an end. 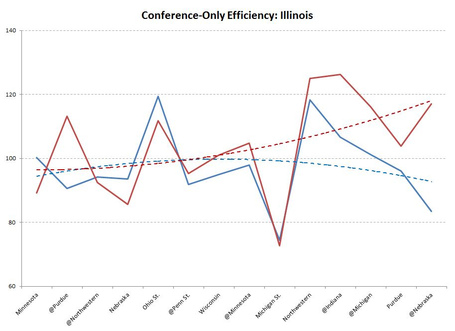 I call this one "IMPLOSION." The writing is now on the wall for Bruce Weber, in indelible marker. I will take a somewhat contrarian position, though, and assert that the Illini may not roll over for the Buckeyes and Wolverines (the latter, in particular, since that's a home game for Illinois). The flip side to the recent collapse is that the pressure is now off. The players know they're not playing for Weber's job. A team with as much talent as Illinois has playing without the burden of expectations could be a dangerous thing for opponents.