As before, title and first-round bye chances are based on 100,000 simulations - there are way too many combinations to do exhaustive computation at this point.

Ohio State has re-emerged as the favorite, but even they are expected to lose another 3 or 4 games - road trips to all three of the other major contenders await. Below the top four is a respectable tier of three likely tournament teams (Purdue is the only one that has any real reason for concern at the moment, due to a couple of awful losses). Minnesota and Northwestern are both in the hunt for an NCAA bid as well, although each will likely have to get to 8-10 in conference at minimum. Iowa is an extreme longshot due to an abominable non-conference record. 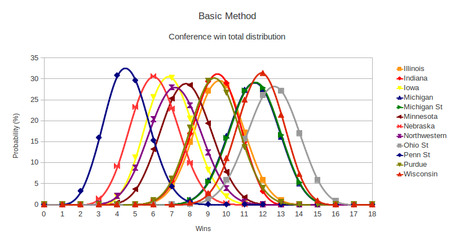 This shows Ohio State slightly out in front, Wisconsin not far behind, and MSU and Michigan almost completely indistinguishable. Purdue, Indiana, and Illinois have near-identical win distributions as well, though not quite as nearly identical as MSU and Michigan.

Margin-aware system after the jump.

Some minor shuffling in the order here: two of our losses being one-pointers reduces their impact on our rating, vaulting us back into second. Similarly, Indiana passes Illinois and Minnesota falls back to Northwestern. 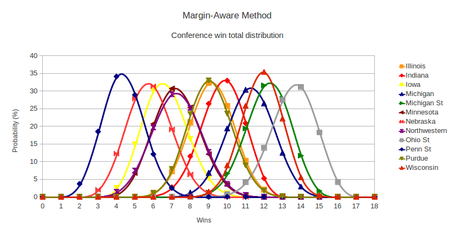 Ohio State and Michigan State have shifted out in front of the rest (Ohio State more so), and Indiana has separated themselves from the middle tier slightly. Northwestern and Minnesota have nearly identical averages, but Northwestern's distribution is a little flatter (which gives them a better chance of overachieving by enough to make the tournament).

One more update will be posted with two weeks to go in conference play, then Big Ten and NCAA tournament bracket probabilities.