Following Michigan State's conference season-opening win against Indiana, Keith Appling had attempted 136 three-point shots as a Spartan. He had converted 53 of those, for a healthy shooting percentage of .390.

Since that game, however, Appling has made just 9 three-pointers in 53 attempts--a shooting percentage of .170. Those attempts span 22 basketball games, so this is not a short-term slump.

Needless to say, the near inability to drain a shot from beyond the arc puts a crimp in things when your primary job in the half-court offense is to initiate the offense at the top of the arc. Opponents have sagged off Appling to varying degrees, preventing him from driving to the basket and complicating efforts to get other MSU shooters open.

On Sunday, Saint Louis took this defensive approach to an extreme, outright daring Appling to shoot the ball from the outside. While Appling never looked totally confident shooting the ball, he still somehow managed to score a game-high 19 points against the Billikens. (This is why we have box scores, by the way. If you watched that game live and didn't attempt to keep track of how many points Appling had scored, there's no way you would have guessed he finished with 19.)

The big shot, of course, was the three-pointer Appling hit off a Draymond Green pass with a minute half to go to give MSU a 7-point lead and put SLU into frantic comeback mode. The ball hit every part of the backboard and rim possible before it dropped in, but dropped in it did. Appling also made 3 of 7 jumpshot attempts inside the arc, stepping into the space SLU left him at the top of the key before launching.

Appling posted 3 assists to go with his 19 points (on 14 FGA) and only turned the ball over once. This output is consistent with recent games, in which he's managed to post very efficient offensive numbers despite the continuing struggles from beyond the arc. The chart below shows Appling's five-game-average offensive rating compared to his five-game three-point shooting percentage over the course of the season. 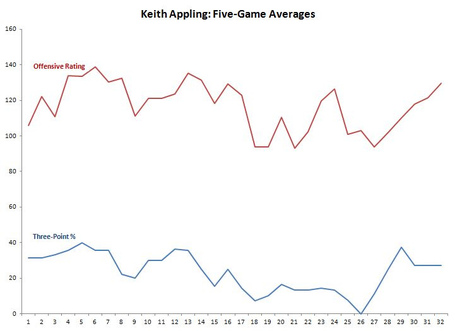 When Appling's shooting slump first materialized early in the Big Ten season (which starts at game #12 above), his overall offensive efficiency took a dive with it. Over a 12-game stretch beginning with the loss at Michigan, Appling scored more than 10 points just 3 times and turned the ball over 2.9 times per game.

Over the last 6 games, conversely, Appling has gotten past the 10-point mark 4 times and is averaging just 1.5 turnovers per game. (Assists are up just slightly: 4.2 per game vs. 3.8 in the previous 12 games.) His three-point shooting has improved somewhat during that stretch, but only to the tune of 4 for 14. The spike in the blue line above is somewhat misleading due to the limited number of attempts.

Our hope, of course, is that the pinball-style three-point make on Sunday marks the end of Appling's protracted three-point slump. But if it doesn't, it's reassuring that Appling seems to have adapted as best he can--walking the fine line between letting the slump completely dominate his offensive game and being excessively aggressive against defenses that are laying off him. The fact that Louisville's style of play should allow for more transition scoring options is also encouraging. (Tom Izzo: "We're going to attack. A lot of people make that mistake. A lot of people just try to break the press. We're not just trying to break the press, we're going to make you pay for pressing us." Right on.)

The team is playing through Draymond Green quite a bit at key moments these days. (SLU pulled to within 3 points of MSU with 5:34 to go in Sunday's game. MSU called a timeout. Over the next 5 possessions, MSU scored 9 points--off one made field and goal 3 assists by Draymond.) But the ball is still in the hands of Appling an awful lot. If he can continue to make efficient, if not spectacular, offensive contributions, that will go a long way in the quest to reach the Superdome.