(Bump -- no longer prizeless, I'll throw in a random MSU prize I find on eBay for the winner. One entry per person please. -- Pete)

It's March, which means we all must feed the compulsion to fill out brackets. Sometimes we do so with a hope for winning some sort of prize, despite the fact that casual viewers of the sport seem to do quite well even compared with big fans of the sport. This is not that time. Well it wasn't before, anyway.

Other times, we fill out brackets for the hell of it. This is that time. Just eleven games to pick, but with 12 teams that we're intimately familiar with. And perhaps the BTT does mean something this year given that the conference ended in a three way tie (or maybe the #4 team Wisconsin will further muddy the waters by pulling off an unforeseen title) and that there are several teams that are dangerous enough (Iowa, Illinois or Minnesota) to steal an auto bid. Northwestern is seeking to secure a bid with a win or two. 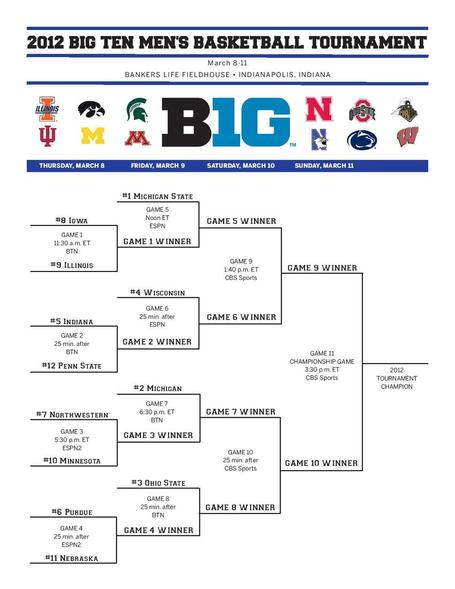 Your bracket is here in pdf.

Scoring will be 1 point for first round games, 2 for the second round, 3 for the semifinal and 5 for correctly picking the champion. The meaningless totally meaningful tie breaker will be total points scored in the title game.

Picks can be given in a game by game format in the comments (IE, Game 1: A beats B Game 2: C beats D etc). Have them in by tip for the first game for that to count. Later picks will be included, but that game won't be counted and if you choose the winner of a first round game that finished before your pick was in to win further games, you'll receive a 1 point deduction each round you choose them. Example: Picking Iowa to beat MSU AFTER you already know Iowa won the first game would result in you only being able to earn 1 point for that pick. Basically, if you're really upset minded, get your picks in soon.

There's no prize (Except there totally is now! - Pete), but there's always smugness and bragging rights.