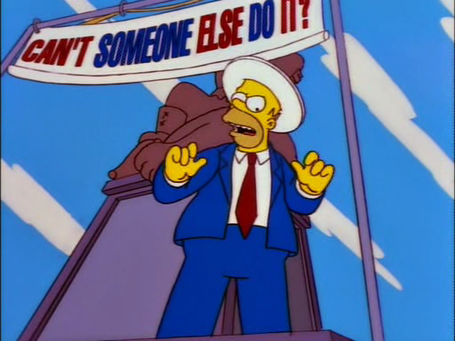 via deadhomersociety.files.wordpress.com -- now the TOC motto for this month.

Once again it's March, the most wonderful time of the year for college basketball. While exhilarting, it does create quite the workload here at TOC Incorporated. At these times, we fall back on a tried and true method of content -- ask questions to another blog and have it do the preview for us. I sent some questions to RossWB of the often imitated, never duplicated Iowa blog Black Heart Gold Pants about the first match of the Big Ten Tournament, Day 2. My questions are in the block quotes, and if you saunter on over to BHGP I'm sure you'll find my answers to their questions as well.

1) It's shameful the Hawkeyes resorted to sacrifing Adam Haluska last month so his spirit could be instilled in Matt Gatens, but it worked. Explain what he's meant to this team during their current 7-7 run since MSU.

Adam Haluska was a great Hawkeye, even if my former roommate did once make him sleep in a bathtub... Oh wait, you meant Matt Gatens? Gatens has been extraordinary over the last few months -- there's really no other way to put it. The run he put together from beyond the arc in February was like nothing I've ever seen out of Iowa player (well, except maybe from Chris Kingsbury). It's funny you should mention Haluska, because the season Gatens is having is probably the best season put together by an Iowa player since Haluska's senior year in 2006-07. And to be perfectly honest, Gatens' transformation into an elite player came as a bit of a surprise to me. I watched a lot of Iowa basketball over the previous three seasons, which meant I watched a lot of Matt Gatens. He was always a good player, but a player with a diverse, refined offensive game? The sort of player who could take over a game and will his team to a win? That wasn't Matt Gatens. It didn't help that he was saddled with a system that did him no favors during his first two seasons (thanks, Lickliter) and he's now in an offensive system much better suited to his skills, but mostly I think the credit is owed to Matt for the immense work he put in during the offseason. He's not only been a far better long-range shooter, but he's been a far more confident and effective finisher near the rim. Add to that the improvement he's made in his defense and you have a player who's become a legitimate B1G star on both ends of the court. I also think Gatens realized in January that this was his last chance to make the postseason and that the only way Iowa was going to get there was if he took over and became a much bigger part of the offense. He's been deferential to a fault at times in the past, but since January he's been much more comfortable about taking over a game.

2) There are other players on the roster though, aren't there? Aaron White's been great as a freshman, and I keep hearing about this Roy Devyn Marble character. Explain what both their contributions mean to the team.

White and Marble have really excelled in their roles as Gatens' primary sidekicks. I keep waiting for White to hit the proverbial "freshman wall," but it just hasn't happened. He's played better and better as the season has dragged on. Entering the season, I liked him to be a solid contributor and a good player off the bench, but I certainly didn't dream that he'd be a no-brainer pick to the Big Ten's All-Freshman team. He's turned into a strong rebounder and he has a sneaky offensive game; even when he's not having a particularly good shooting night, he seems to end up with 10-12 points. Marble has slowed down a bit from the torrid pace he was on earlier this season when he was arguably Iowa's best player, but he's still played very well. He stepped up to take over the primary ballhandling duties for much of the season while Bryce Cartwright was dealing with several nagging injuries and really did a nice job in that role. He's made noticeable strides in every aspect of his game since he was a freshman, particularly when it comes to passing (he's had some gorgeous assists this year) and defense (where he's been probably our second-best defender behind Gatens). If he can develop a more consistent jump shot before next year and improve his three-point shooting, he'll really be a handful for the rest of the Big Ten. Which would be good, because with Gatens gone we're going to be relying on Marble and White to really shoulder the load next year.

Hawkeye Vodka is a vile substance vomited up by the devil himself and fit only for removing paint or cleaning an engine and Hawkeye Pierce was a dirty hippie. So the only correct answer is Clint Barton. Make mine Marvel!

4) Snark aside though, thank goodness that Fran's uptempo style is sparing us from the many imitators of Bo Ball that came after Wisconsin's success. How much of a joy is it watching the past two years compared to the Lickliter years?

I feel a little like Andy Dufresne at the end of The Shawshank Redemption -- I'm walking on the beach now after years of enduring humiliation and degradation in prison. (I believe that fulfills my blogger mandate to make a Shawshank reference.) Of course I was on my couch screaming at my TV and doing the digital equivalent of slitting my wrists (making comments on a blog), but hey. The only way a style like Bo-ball, or in our case, Lick-ball, is tolerable is if you're winning a lot. It's hard to bitch if you're a Butler fan and you're making repeated trips to the Sweet 16 (or the title game), just like it's easy for Wisconsin fans to pretend Bo-ball isn't boring when they're constantly finishing near the top of the Big Ten and making repeated trips in the NCAA Tournament. But when you're finishing near the bottom of the Big Ten, losing games to non-conference pushovers you've spent a lifetime rolling, and playing some of the most joyless basketball around? Well, then it's agony -- I died a little inside with every bricked three and every offensive series that consisted of thirty seconds of aimless passing or dribbling and one terrible heave at the buzzer. Of course, the other secret of the success teams like Wisconsin and Butler have had is the fact that they've had some damn fine players. Guys like Jordan Taylor, Jon Leuer, Alando Tucker, Matt Howard, Shelvin Mack, and Gordon Haywood were really good. When you have a hell of a time recruiting good players and struggle to keep the ones you have, well, then you really have a recipe for disaster. Which is what we had.
But, yeah, I'm not going to lie: it's fun to see Iowa pushing the pace in a conference that's slowed to a crawl over the last few decades. It's fun to see Iowa understand that transition offense isn't forbidden. It's fun to see Iowa press on defense (although the results have often been less-than-fun; the peril of having players ill-suited to a pressing defense). It's fun to see the offense when it's really clicking. It's fun to see Iowa just flat wear out another team. And it's fun to dream about what this style might look like as the overall talent level improves.

5) Last time Iowa played against MSU, it got a bit out of hand thanks in large part to the Spartans converting myriad fast break opportunities. Do you think Iowa will try and eliminate any transition opportunities for MSU by foregoing offensive rebounds?

If you watched the first half of Iowa's game with Illinois yesterday, you saw a team that seemed to think offensive rebounds were radioactive. Illinois massacred Iowa on the glass in that half; it's a miracle Iowa was only down 4 at halftime. They turned that around to a shocking degree in the second half, but that kind of rebounding prowess on the glass has been pretty rare for Iowa this year. A part of me is a little concerned that Michigan State will run Iowa off the floor again... but another part of me thinks Iowa's defense has made enormous strides in the second half of the season. They still won't be mistaken for one of the top units in the conference, but they were much, much better in February than they had been in several earlier games (see: @MSU, OSU, @IND, NEB...). Even when they lost in Feburary, it was rarely because the defense had played really badly. So I'm going to cling to that bit of hope for now.

My heart says Matt Gatens and Aaron White continue their impersonation of Luke Recker and Reggie Evans circa 2001 and Iowa continues its improbable run to the Big Ten Tournament title game. My head says Michigan State is a terrible match-up for Iowa (see: the first game they played this season) and that this game is the worst possible quarterfinal match-up for Iowa. As much as I want my heart to be right... I don't see it. There have been way too many times when the Iowa offense has shriveled up and disappeared late in games. I don't think they can pull that trick against Michigan State and survive. MSU 74, Iowa 65