Alright, so you've got your basic outside zone run, and that's working pretty good, but your opponent is adjusting. They're starting to put like, a bunch of dudes in the box to stop the run. A whole bunch of dudes. They're bringing down a safety, or walking over a cornerback, or adding another linebacker. We're talking 8 even, 9 dude defensive fronts. And now you are like, "That's way too many dudes! I can't block that many dudes!". And you might think you're right. But you're wrong. You can block that many dudes, and you can do it while still running outside zone. You've just got to be smart about it.

Motioning, or moving a player before the snap, is a long standing trick of offenses against defenses. It typically lets you do two things. First, it let's you figure out whether the defense is in man-to-man or zone coverage. If the guy covering the receiver or running back you're shifting follows him, you're probably seeing man to man. If he stays where he is, you're probably seeing zone. But second, if you shift your formation, and the opponent doesn't respond, or responds incorrectly, you can get into extremely favorable situations.

Look at this picture from the play I'm about to break down: 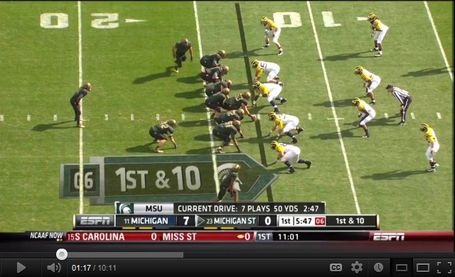 I want you to look at that picture and draw a line right down the hash-mark that the ball is placed on and count how many players fall on each side of that line. Right now MSU has four players above that line (LG, LT, TE, H-Back), two right over that line (QB, C) and 5 below that line (RG, RT, FB, RB, WR). Michigan has six players above that line (RDT, NT, MLB, ROLB, Boundary CB, and FS [you can see his shadow at the top right of the screen]), no one on that line, and five below it (DT, LDE, LOLB, SS, and the field CB [out of frame at the bottom of the screen. Thanks ESPN]) .

MSU's 'power' in terms of numbers is to the right. They have 5 players to Michigan's 5 players. But one of those players is the RB, and thus isn't an actually blocker on a run play. Michigan has 9 dudes within 7 yards of the line of scrimmage and moreover, has shifted them to stop a run to the right, particularly an outside run to the right. It looks to me like they're counting on that DL shift to hedge against the seal blocks of an outside zone run, and are planning on using these four second level players (the boundary cornerback, the middle linebacker, the left outside linebacker, and the strong safety) to run down the play.

Well, as can see in that still frame, MSU is putting the H-back at the top of the formation in motion, leading to a new numbers game: 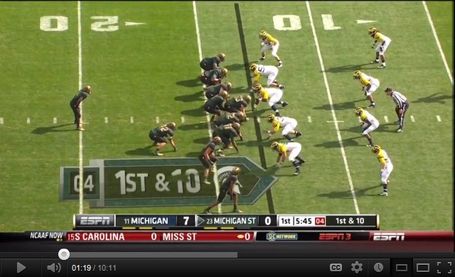 The H-back motioned to the other side of the formation and is now lined up over the LDE. The ball has just been snapped. I want you to re-imagine that line down the hash-mark and recount both sides players. MSU now has five blockers beneath the line, plus the center right over the line, plus the running back. UM... still has just the five guys beneath the imaginary line, and six guys above it. The strong safety has walked down to become even with the linebackers but it doesn't even matter, they haven't properly shifted.

The blocking on this play for MSU is zone right. If you remember from the article on outside zone, that this means the lineman here are going to take a big step to their right, meaning this center will essentially become the 6th blocker beneath that imaginary line on the hash-mark. MSU now has six blockers and a running back vs. five UM defenders. Without anything fancy, and without a running threat at QB, Michigan State now has a clear tactical advantage and the ball has only just reached the QB's hands. 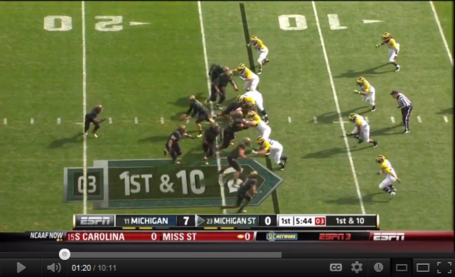 Cousins is just making his pitch to Baker. The end man on the line of scrimmage (also referred to as the EMLOS), in this case the right outside linebacker, is being completely ignored for now, because he simply isn't a threat to stop this play. MSU's lineman are moving down the line of scrimmage to the right. The LG has cut blocked the DT, effectively taking him out of the play. MSU's RG and H-back have both blocked the man in front of them. Cunningham hasn't made his move yet.

Interesting wrinkle number #1: Contrary to most zone blocking schemes, MSU has a lineman pulling here (looping around the rest of the offensive blocks), and contrary to most pulls, it's not an OG, but the right OT Fou Fonoti (you can see him right in front of the fullback here). 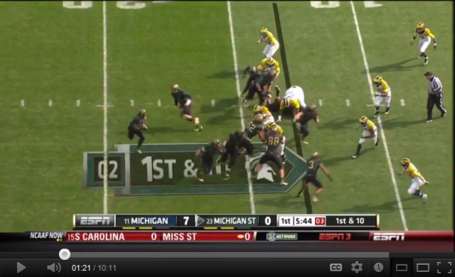 Baker just got the pitch and oh Lordy, look at those seals MSU is getting. You can see the numbers on the back of McDonald's, and especially Linthicum's, jerseys, which is a good sign on these plays. The RDE has also been blocked from flying down the line of scrimmage to make a play, and the ROLB is still being totally ignored and he doesn't seem to know what to do (I mean, I guess he's holding any possibility of play action or a bootleg by Cousins, but it's pretty clear that's not coming). You can also see the center, Jackson flying into the 2nd level to take on a LB. The FB Anderson and the puling RT have formed a shield coming off the outside edge in front of Baker.

Interesting wrinkle #2: Cunningham does not block the CB at the bottom of the screen like you might expect. Instead, in a move that gives the play its name, he viciously cracks back on this left OLB. 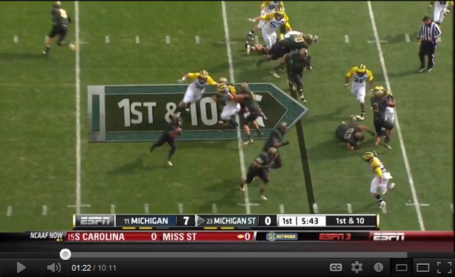 Baker is free to the outside with two blockers in front of him, running straight at two Michigan defensive backs. Here we see Cunningham cracking back on one LB, taking him out of the play and Jackson either trips or throws himself out in an attempt to double team the LB... 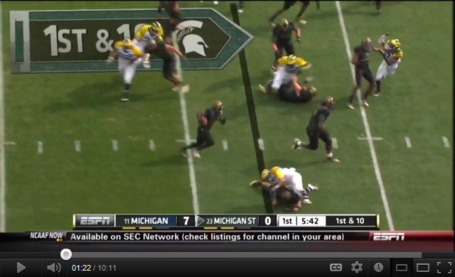 And in a bit of fortuitous positioning, trips up the other LB. Anderson simply buries the strong safety. And Baker is almost to the line of scrimmage with one blocker and just one more man to beat. 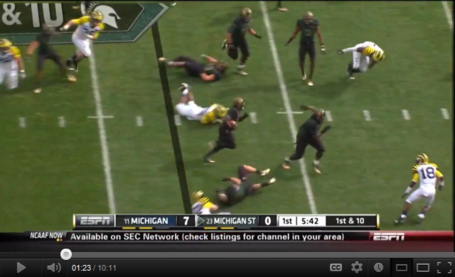 If Fonoti can block this cornerback (#18) here, this play is a surefire TD. If Baker can juke around him, also a TD. Can they do it? Can. They. Do. it? 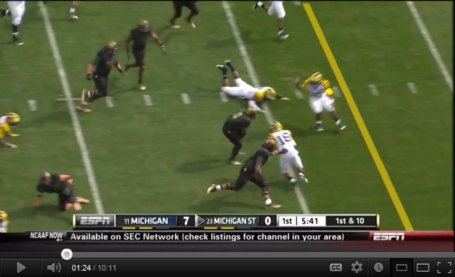 Uh, well, no. Fonoti durfs up the block and Baker cuts inside towards other UM defenders instead of outside to the pylon. 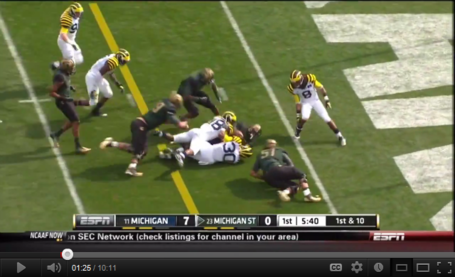 But Baker does blast these defenders and carry them all the way down to the goal line, where he manages to punch the ball in on the very next play, for the TD that ties this game up.

You can run, and run very well, against these types of stacked and slanted fronts, if you're smart about it. Using motion to create favorable situations, and finding different ways to get lots of blockers at the point of attack in a manner that defenses don't expect, or can't handle, can lead to big gains at little cost to you, and little extra work installing new blocking schemes (only two players, the WR and one OT have responsibilities different than a basic outside zone. Everyone else is doing the same thing they'd normally do). This play gets blockers, and the ball, to the edge so quickly it can outflank even these 'stack the box' schemes.