Share All sharing options for: Better Know a Run Game- Outside Zone

I got about 80% of the way through a post of Roushar doing a cool twist on a standard 'outside zone run' before I decided I was putting the cart before the horse, and should make sure readers (and myself) are familiar with a basic outside zone run first. So, this is that. Plus: with an assist to Youtube wizard MSUAndyHRCMB, I've been able to provide video of these particular plays, which is very nice.

Outside zone is a rock. It can get you nice solid gains, it can get you huge plays, it just works. If you are a NFL or college team and you don't run outside zone, you are a rare breed indeed. I would be willing to bet that MSU has called this play (some variation on it at least) every game, under both Treadwell and Roushar. So let's break down what it is, and why MSU uses it.

There is an easy, surefire, way to identify zone blocking: look at the lineman's feet. Is their first step to the side, or even backwards? Are they all (or at least almost all) moving to the right or left collectively, like some sort of synchronized dance routine? If they are, you can be pretty sure you're seeing zone blocking.

Are there different types of zone blocking?

Yes there are, but primarily when you talk about zone runs, you're really talking about two broad categories: Outside zone and inside zone. One of these we're talking about right now, inside zone will be a later post.

How does each lineman know who to block?

It's pretty simple really. If a defender is in front of you (if you are 'covered' as the lingo goes) you block that defender. The oft repeated phrase that all zones eventually become man-to-man holds true here. However, if there is no defender in front of you, that's where the zone comes in. Uncovered players will move towards the direction the play is headed and either help double team one of the defenders or attack a linebacker. As the play develops, this player will often slip off his double team to get to the 'second level' (linebackers, safeties, corner backs).

More after the jump...

What does outside zone aim to do?

Outside zone primarily aims to get the running back to the outside edge of the defense, what you may know as 'off tackle', with an advantage in the numbers of blockers v. the number of blockees. Offensive linemen want to get 'seals' on defensive linemen and linebackers, in essence to get their bodies to the side of the defenders, between them and the sideline. To achieve this, you'll often notice their first step is particularly large either towards the sideline or even backwards. You'll also notice defenders on the backside of the play are often left unblocked, at first, though they may be cut back on later if need be. If the OL manage to seal off enough defenders to the inside, the RB will likely find a massive running lane to the outside and, if the WR has held his block on the CB, or gotten out onto the safety, a lot of green real estate in front of him.

Can I see an example of MSU doing this?

Yes. The two following plays are from the 2010 Notre Dame game. It'd be nice to pick some stuff out from 2011, but you'll have to trust me for now that outside zone is a concept that Roushar carried over from Treadwell. Besides I found this game to have a couple of particularly good, and easy to capture, examples. 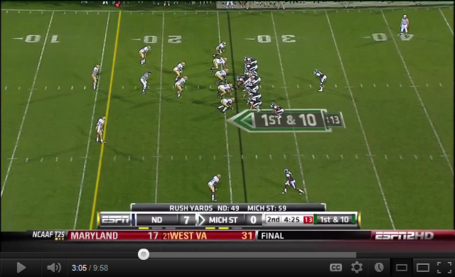 MSU is in a under center set that screams run, with one tight end to each side, and an H back perched outside the shoulder of the left TE, with only a single wide receiver split out wide to the bottom of the screen, a couple yards behind the line of scrimmage.

ND responds with their fairly standard 3-4 look, with both linebackers rolled up on the line, one with his hand on the ground. Both MLB are about five yards deep. Both safeties are hanging around the first down marker. 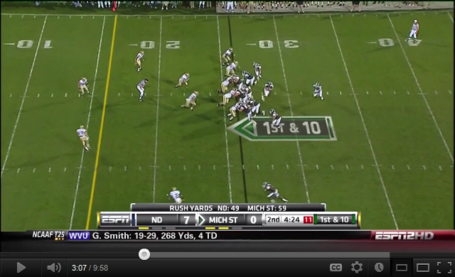 You can see the lineman each taking their step to the left, and you can see that the backside of the defensive line near the top of the picture is being fairly well ignored for now. The two MLB are the players with the best chance at blowing this play up, as everyone else in the region is pretty well blocked or on the other side of the play. 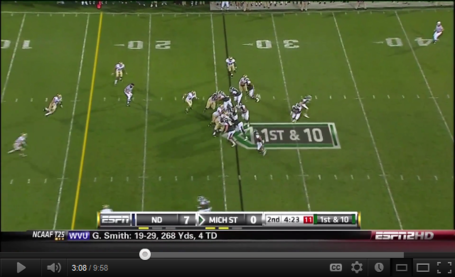 Just after the hand-off is made, you can see that the backside defensive end has picked up, though the backside OLB is still ignored. One of the ND MLB's has crashed into the line in an attempt to eliminate that running lane, or possibly get into the backfield, but he is also taking himself out of outside contain. You can see the playside seals MSU are getting on these DL aren't quite perfect but are good enough. If ND has one player left who can stop this play it is the MLB #4, but MSU still has a handful of blockers who aren't engaged right now. 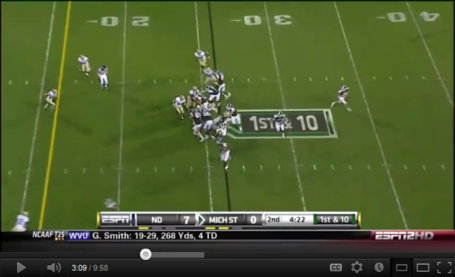 Oh, it's getting ugly for ND now. The right side of their line has been almost totally totally sealed away from Bell. If Charlie Gantt, the last man on MSU's line can get in front of #4, ND is in trouble. 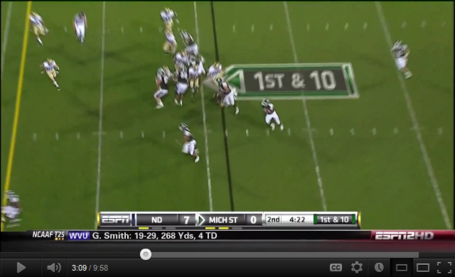 ND is in trouble. Bell is almost to the line of scrimmage with a lead blocker and nothing else but grass for about 8-10 yards. 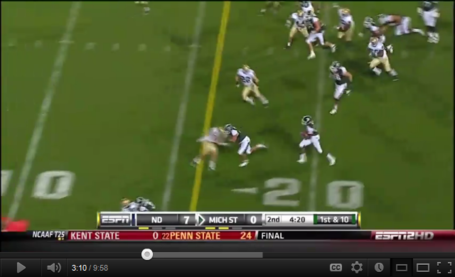 About seven yards down field, his blocker gets a helmet on somebody and Bell is going to get to hit a DB which he just loves to do. 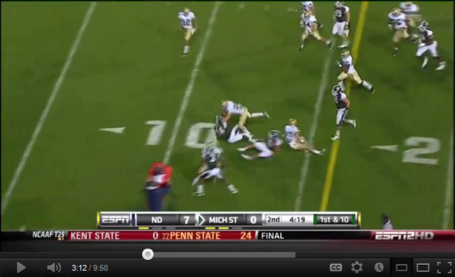 Kapow. He plows into some poor ND defender near the line of scrimmage and manages to tumble a few more yards for about a 13 yard gain. First down. Success.

What if the defense knows you're going to try this and floods hard to the outside?

:D Just engage outside zone's built-in counterattack: cutback lanes. Because of the first step and the way zone blocking flows down the line, running backs are presented with 'moving gaps'. If linemen and linebackers are too eager to try and beat the inside seals of the blockers and over-pursue to the outside, the RB can shrug, and cutback into these abandoned gaps for the now wide open lane in the middle of the field. This crucially requires your running back to do something he isn't always asked to do: make reads.

Can I see an example of MSU doing this?

Yes, you may, from the same game in fact, driving home the challenge that outside zone can present for a defense. 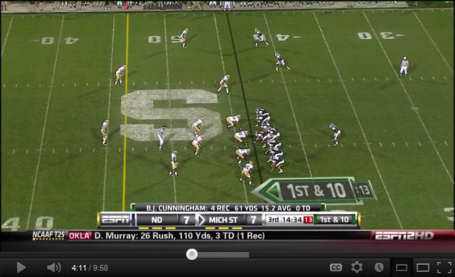 MSU is double tight ends again, but with two receiver split to the top of the screen this time. Notre Dame is again in their 3-4 look, but now one OLB is in 'the alley' between the bottom WR and the top TE. That's important for how the rest of this play develops. The CB at the bottom of the screen is rolled up slightly behind the two MLBs, the safeties are behind the 1st down line again. 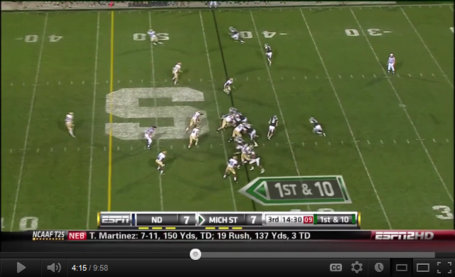 The offensive line steps right this time, but ND plays this much more aggressively. As Cousins goes back to hand-off, you can already see both MLB are flying to the outside, and the playside OLB is screaming up into the flat. 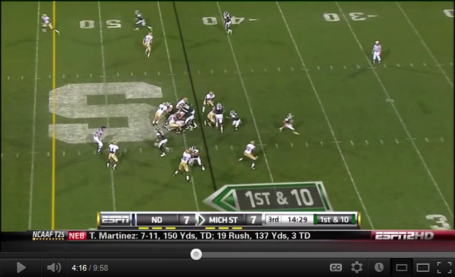 As Baker gets the hand-off, we can see him make his read: cutback. ND has absolutely flooded the outside of this zone, three of their linebackers have run to keep this play from going outside. This time the left tackle on the backside of the play has picked up the OLB, while the guard has let the backside DE through in favor of getting out to the second level of the defense. The middle of the line is looking enticingly open.

Cousins holds the attention of the backside defensive end, and prevents him from crashing down on Baker, with a faked bootleg (one of the oldest tricks in the outside zone book, the pro style's version of the threat of the QB run on the zone read). Baker cuts back once behind Foreman's block (who Bee Tee Dubs, does an unreal job sealing off and pancaking this nose tackle) and heads for the hole. The offensive guard rushes out to meet the solitary linebacker holding down the middle of the field. 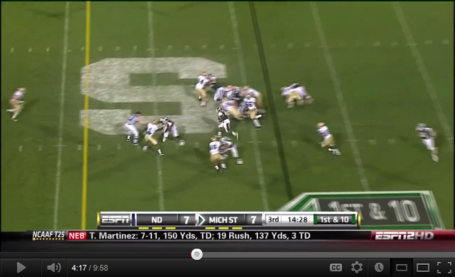 The block connects, as Baker races through the hole. He correctly follows the block from inside to out. The safety is looming to make the tackle and stop this play for 'only' another first down but.. 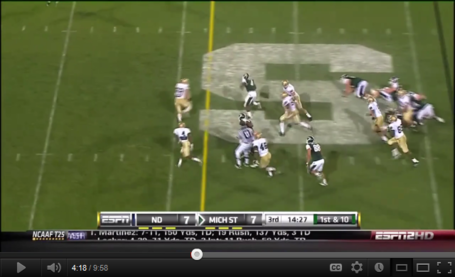 Baker makes a shifty cut to the outside... 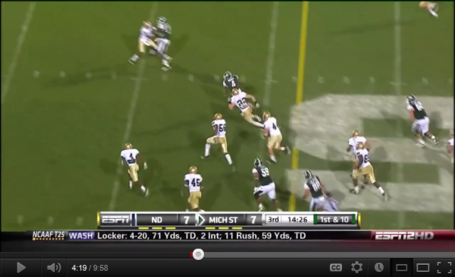 hits the afterburners to run past a couple would be tacklers... 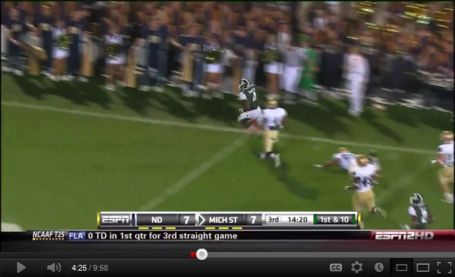 and walks into Club End Zone to celebrate.

The power of outside zone is this: if the defense plays within itself and filters you towards the outside, you'll still probably get a okay-to-good gain depending on how your blocking is. But if they screw up and under or over-pursue, you can mercilessly exploit them for big plays. Outside zone requires your players to do their jobs and move as a unit, but that's something you can drill and drill and drill. It also requires your opponent to move as a unit, and that might not be something they are able to practice as easily.

As always, if you have any questions or comments I'd love to read them. And if there's a play or concept MSU runs that you'd like me to look at, let me know and I'll try my best. Thanks for reading.

Bibliography/Other reading material on outside zone (LOTS of good info/diagrams in these links):