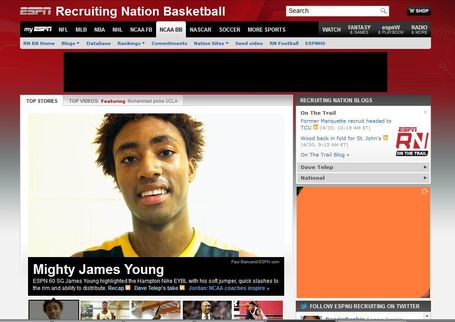 You know that emoticon where the little yellow face spins around and flails its arms? That’s probably the best way to describe the reaction to James Young last weekend. Just weeks ago, Young was a consensus top 20 recruit with only a couple offers and quite a bit to prove. That mission can be considered done and done after last weekend. Young made the frontpage of the ESPN recruiting site (shown above) and received all kinds of accolades for his play. Jeff Borzello of CBS Sports had Young at No. 12 nationally and started to think that might be too low.

He followed up with:

James Young, 2013, The Family: Young had a ton of buzz after a big first weekend in Minneapolis, and he showed why in Virginia. He's a big-time scorer who knocked down 3-pointers with consistency, and was a menace in transition because of his athleticism.

More importantly, Young got the attention of coaches and many new offers. Heavy hitters Izzo, Self, and Calipari were names thrown out as coaches watching him closely at the Hampton Nike EYBL. After being stuck at only a couple, Young now says he has offers from Providence, Ohio State, Michigan State, and others. It’s unclear whether two of his favorites, Kansas and Kentucky, have offered yet. Some Kentucky watchers think Young might be behind other Wildcat recruits but that could change with more Top 5 performances.

This news, as well as Young’s very public fawning over UK, has led to some anxieties in the Spartan fanbase about Michigan State’s chances with the Troy wing. We’ll know more about the situation once that formal offer from Kentucky comes through. If Young doesn’t jump right away, it may open the door for the MSU staff to make a renewed push after the initial sparkle of a Kentucky offer fades. Young has already said that he has a great deal of support for Michigan State around him. Far from wrapping up, it looks like this recruitment is only getting started.

More notes on other recruits after the jump.

Forgive my Jahlil Okafor polemic in the 2014 Recruiting Hotlist but the word keeps coming out to reinforce MSU's close interest in the force from Chicago. The aforementioned Jeff Borzello confirmed what others have said and sourced Jahlil again as saying that Ohio State, Michigan State, Duke, and Arizona are his most aggressive suitors. Like Cliff Alexander before, Okafor was a terror at the basket last weekend and you can see a video of him bending a rim to something less than parallel to the floor. Coach Izzo himself was in to watch Okafor's Mac Irvin Fire AAU squad over the weekend.

Okafor's close friend Tyus Jones continues to turn heads. Recruiting scout extraordinaire Dave Telep called him the "best point guard in America." I'm assuming he meant at the high school level but with the sort of acclaim Jones is getting, I can't be 100%. Telep later clarified that he meant the best "pure point guard," a nod to Jones' ability to not just score but to also run a team and find his teammates. Brian Bosworth of NBE Basketball put Jones at the top of his review of the EYBL's second session and that's available here.

There is tons of recent video this month of Jones demonstrating his ability to score or make plays for others.

Michigan State is in excellent shape recruiting Tyus. It's tantalizing to think that Jones might be holding off and working his pal Jahlil Okafor a little more before he's ready to make a commitment to Michigan State.

There might be a new suitor for Mishawaka's Demetrius Jackson. In a game of twitter telephone, word came out that new head coach John Groce watched Jackson multiple times over the weekend to evaluate him. This would be an interesting choice for attention from Illinois. The Fighting Illini already have a commitment from guard Jalen James in the 2013 class but it's possible that they could play together in the right situation with one of the two in a combo role. Does MSU turn up the heat again on Jackson if James Young gets the "blues?"

JaQuan Lyle is looking at taking a visit to Butler soon. If he can fit himself into the "Butler Way" and rigors of its private school environment, it might be a sign that Lyle is making excellent progress in his attempt to demonstrate his maturity and poise. There's still little doubt about his talent. Lyle has the attention of Duke, Ohio State, Louisville, Indiana, and many others. You can see him talk recruiting in an interview with the Courier-Journal here.

Jabari Parker missed the second weekend of the EYBL but he was there for the first and there is a mixtape of that weekend to see where his game is at right now. A new article (many of them excellent) comes out about Jabari every day. His ability and character has caught attention in many corners and this piece from Salt Lake City looks at the role of his denomination and the possibility of a two-year mission with the LDS. His Simeon coach Robert Smith went on the record to talk at length about what Jabari might be looking for and what could factor into his decision.

The spring evaluation period has now ended for college coaches and we're now in a long "Quiet Period" that will last with little interruption until the next evaluation periods in July. This means that in-person contact has to take place on the college campus; that's the only permissible place. News might be a slow for a while unless Tom Izzo is able to secure another major visitor this spring. A recruit could call up a coach and commit at any time but Spartan fans might have to wait until later this summer for developments that exciting.