To Win the Big Ten, Rule the Skies

Share All sharing options for: To Win the Big Ten, Rule the Skies

I was pretty sure I'd written about this topic last year, but searches through the archives seemed to reveal I had not. Enjoy.

If there is any single piece of conventional wisdom about how to be successful in Big Ten football, that pops up more than any other, it probably is this: You must be able to stop the run, and you must be able to run the football. Just like Duffy, Schembechler and Woody; and Alvarez, Paterno, Carr, and Tressel did. But don't take my word for it. Here's a handful of coaches new and old, fired and not fired, offensive and defensive, spread and pro-style, all converging around the same talking point: You win the Big Ten by being got-dang tough in the trenches, running the ball, and stopping the other team from running the ball.

"I think first and foremost, you've got to be able to run the football to be successful in college football."
-OSU offensive coordinator Tom Herman

"To win [the big ten] conference, your defense had better be extremely tough and hard-nosed in its ability to stop the run."
-former Minnesota head coach Tim Brewster

"we have to do a better job against the run. You can’t play good defense if you can’t stop the run."

“We have to go into every game thinking we can run the football; that’s where the game is won,’’

"I can just talk to our philosophy... We're obviously going to try to limit how much people can run the football against us. I don't care if we're facing a team that throws a football 70 times a game, they're not going to run the football on us..."

Man, you can just feel the grittiness emanating off of your computer screen. No wussy ball in the Big Ten, that's what led to the firings of numerous coaches over the past decade: JLS, Rodriguez, Brewster, Lynch, and Zook, right?

Except, here's the thing: all that stuff above is wrong. Wait, that's too strong: rather, it's focused on sub-optimal strategy. Rushing offense and defense don't matter nearly as much as everyone thinks they do in the Big Ten. Nor particularly does, 'establishing the run' or 'running to set up the pass'. There is one stat, that, if you can get really high marks at it on both sides of the ball, you are nearly guaranteed success. One stat that really matters, and, interestingly enough, it's sort of a weird one. An ugly duckling of the stats world: Passer Rating. Or as a popular 'advanced football statistics' author put it to Sports Illustrated:

Backing up that substantial claim, after the jump...

What the heck is passer rating again?

Passer rating is a system of measuring quarterback play and passing offenses by taking into account several QB statistics and dropping them into a weighted formula that spits out a total score. Here's the NCAA formula for Passer Rating:

Like, so stupid that when ESPN came up with their own rating system, people were like, "That's stupid, but at least it's still smarter than Passer Rating."

I mean, yes, Passer Rating is kind of dumb. Categories are weighted pretty arbitrarily, small sample sizes can totally screw everything up, and you can get really weird results where someone has a high Passer rating but totally fails the 'eye test' or the other way around. I don't pretend to really understand why they decided on those specific numbers and factors in the equation.

And yet, this weird Frankenstein stat is really, really, good at predicting football excellence, even in the supposedly run heavy Big Ten.

Well, in the Big ten, net passer rating values compared against a teams wins, or what CHFF calls Passer Rating Differential, gives a correlation rate in the high .8's (depending on how much data you input). This is a stronger correlation towards winning than Net Big Plays (a pretty good predictor of success itself), and a stronger correlation than rushing yards, or passing yards, or total offense, total defense, scoring offense, or scoring defense; any of the usual suspects, really. In other words, you show me a team with a high Net Passer Rating, and I'll show you a team that has a better chance of racking up victories and championships than a team with a high scoring or high yardage offense, or a low scoring or low yardage defense. And it's fairly easy to calculate.

Net Passer Rating provides firm evidence that Big Ten games are not won on the ground, but through the air.

Got any proof for that?

Sure. There's this post, which after analyzing the last 71 NFL champions found that:

-An incredible 69 of them registered on the plus side of Passer Rating Differential.

-56 were +10 or better in Passer Rating Differential.

-46 were +20 or better in Passer Rating Differential.

-The average NFL champion over the long haul of 71 years was +27.4 in Passer Rating Differential.

And this post, which found further strong relationships between NFL success and Passer Rating Differential.

Yeah, but that's all NFL stuff. And besides, the NFL formula is different than the NCAA formula. How do I know that those insights carry over, especially to the Big Ten?

Cause I got some mighty fine data. Spreadsheet time:

-In the top tier, you have three teams who clearly separated themselves from the pack with their net ratings at 1, 2, and 3 (including the BTCCG participants at a clear 1-2), as well as an outlier at 4, Northwestern, who let several games slip away late.

-in the middle tier, you have the middle class of the Big Ten in 2011, plus Nebraska, all clumped within 4 net points of each other, very far away from the best and worst teams in the conference.

-then in the bottom tier, you have the only four teams with negative Passer Rating Differentials, with Purdue and Penn State (the other outlier) chilling a handful of points below zero, and the two obvious worst teams in the Big Ten, Minnesota and Indiana, both sporting truly terrible PRDs.

In all, in 2011, there was a very strong .85 correlation between a teams PRD and its total wins. Correlation is not causation and all that but still, .85 yo.

Sure, it can, but this analysis seems to indicate that doesn't matter as much. If you have a great running offense awesome, and if your defense can really stuff the run, that's cool too. But you don't necessarily need either of those things, whereas according to the data I've looked at, if you want to win a Big Ten title and don't have a great passing game, or passing defense, or combination of the two, you can basically forget about it.

So does this mean everyone should switch to the airraid on offense and pass almost every down, and play 3-2-6 on defense and really try to shut down the pass?

No, no, no. Wisconsin and MSU both had really strong years operating out of fairly standard pro-style offenses and 4-3 defenses. Because Passer Rating is a efficiency measure and not a raw statistic, if you can throw 4 touchdowns in 20 attempts, that's just as successful as throwing 100 touchdowns on 500 attempts. Obviously, you'll probably want to find a balance somewhere in between those numbers of attempts, but a highly efficient passing game is highly efficient regardless of how much you throw it. Same goes for the defensive side of the ball.

Are we sure coaches aren't just throwing red meat to the fanbases? They know this stuff already, right?

Yeah, could be. But even if they're just playing into long time expectations of Midwestern football to be a tough, mauling, showdown (the oft caricatured 'three yards and a cloud of dust'), you've got to think that part of it is still old-school, coach programming. Almost every BT team makes it a vocal goal to stop and emphasize the run.

My name's KJ, and I love scatterplots! 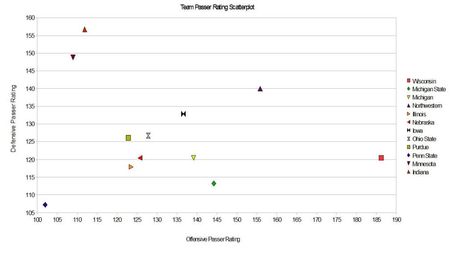 True, which is why I went back and looked over the data in the Big Ten from 2007-2011, to get up to 56 data points. And, you'll have to take my word for this right now, because this is the content of another post, but the correlation gets stronger, not weaker, as you add more data. It's pretty legit.

If you're looking for a good prediction to win the Big Ten, don't look at bruising run games, or tackle machine linebacking corps. Look first for efficient passing games, and efficient passing defenses. No matter what you've heard from coaches, analysts, and fans for decades now, in the modern Big Ten, if you want to find the next likely champ, look to the skies.