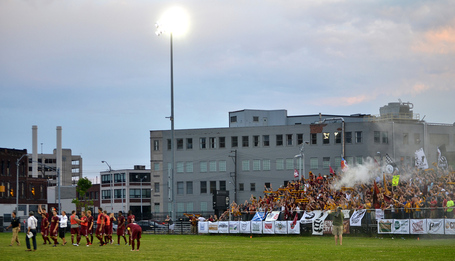 We love you so"

He gets up off the green grass. A little shoving match starts before teammates and the officials break it up. But he's happy. A year ago, competitive soccer didn't seem like a possibility again.

The former MSU soccer star's career with Toronto FC in Major League Soccer ended last year, and he suffered a toe injury in June, which ended his professional hopes. But when MSU assistant coach Kylie Stannard let Thompson know about Detroit City FC, a semi-pro-type club that was getting started and Stannard was going to coach, Thompson was all ears.

Now, Detroit City is sitting atop the table in its division in the National Premier Soccer League, and four former Spartans form the core of a club that has picked up more and more support in Detroit.

"It's been fun," Thompson said. "I think the biggest aspect would be the fan base and supporters. It's pretty remarkable the amount of people they get, as well as how they act. It's very different than what you usually see in the United States. "

The supporters side of the bleachers is full in time for the national anthem. The speakers play the acoustics, while the fans sings the words. Out come the flares and smoke-makers. The fans' drums and tambourines are ready in support of "Le Rouge". By the end of the anthem, a banner has been unfurled on the other side so the AFC Cleveland Players can read it.

"Our City, Your Nightmare."

Stannard was reluctant to take the job at first.

Last summer, Ben Steffans, a lawyer in Detroit and childhood friend of Stannard, came to the coach with the idea of the team. Steffans was born in Detroit, but he moved to Cedar Rapids, Iowa, at a young age. The pair grew up together on the pitch in Cedar Rapids.

Stannard became an assistant at MSU in 2009 after four years as an assistant at Northern Illinois. Steffans had since moved back to the Detroit area and brought up the idea of the club to Stannard. He wanted his friend to help.

"To begin, I was kind of helping Ben try to find some names and guys that might be interested in coaching," Stannard said. "He originally wanted me to be the coach right off the bat. For a few months there, I didn't know if I'd be able to juggle it all and handle it, or get the approval from Michigan State. In that between time, I was calling around various coaches to see if they'd be interested."

Stannard talked with MSU officials and compliance, to make sure it was both OK and within the NCAA rules. MSU head coach Damon Rensing signed off on the idea, especially since the season came in a down time in the offseason. Things were a little trickier with compliance, but the idea wasn't novel. Many college baseball players spend part of the summer playing for other organized teams.

"The administration wanted to make sure we were dotting our Is and crossing ours Ts as far as the compliance issues go," Stannard said. "I sat down with compliance. We literally went over it three or four times, double- and triple-checking everything to make sure it was going to be OK. They gave it the go-ahead."

By the winter, the creation of Detroit City Football Club was official. But Stannard needed some players. As part of NCAA rules, he would not be allowed to coach any current MSU players. But he could coach other college players, and he could coach former Spartans. 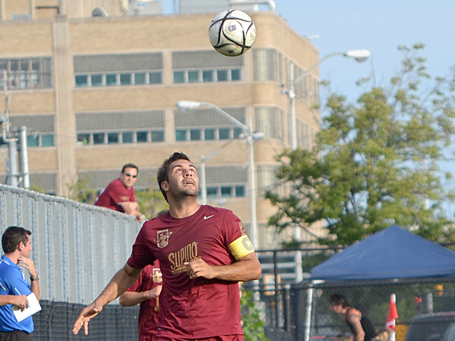 The field is covered in clovers. Cass Tech stadium is a football field, not a futbol field. Flat ground isn't a major priority. When the soccer ball is there, the odd bounces can be sudden. You have to keep your focus at all times.

Josh Rogers' college eligibility ended with a Big Ten regular season and tournament championship in 2008. But he stayed with the MSU program as a volunteer assistant. Last season, the Spartans dealt with so many injuries that Rogers was a frequent practice player.

When Stannard let Rogers know about what was going on with Detroit City, Rogers jumped at the opportunity. On the back line as a defender, Rogers has the captain's arm band on his left bicep.

"It's pretty incredible," Rogers said. "It's tough being out of the game. I was out for a couple years. Just to get back to a competitive atmosphere again is great." 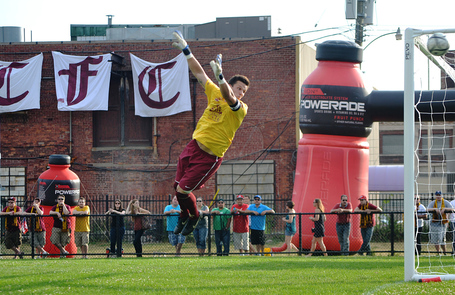 Jeremy Clark's lone season as starting goalkeeper at MSU didn't go as well as he would have liked last fall. But as mentioned, the Spartans were decimated with injuries. In January, Clark became a volunteer goalkeeper coach for MSU.

When Stannard offered a chance to keep playing, Clark took it.

"I thought my playing at a high level was almost over. Honestly, this is the best crowd and organization that anyone could ask to play for. They do everything the right way. I give them a ton of credit and I give the fans a ton of credit also. They come to every game with drums, flares and smoke bombs. For us players, that's an atmosphere we normally don't get to experience pretty much ever."

The players aren't paid, and the coaches get a small stipend, but the club provides what's necessary on road trips. Given the fact the club is in its first season, those involved couldn't expect much more success.

More than a game

Former Oakland University player Stefan St. Louis knocks in a cross to give Le Rouge a 1-0 lead in the first half. He pulls off his jersey, revealing a maroon T-shirt. "City ‘Til I Die," the shirt reads. It's a phrase adopted from Manchester City in the English Premier League. St. Louis and the team run over to the supporters for high fives and celebration.

Thompson and Cyrus Saydee had different roads to Detroit City.

Both have or had professional aspirations. Thompson finished at MSU in 2010 was drafted by Toronto in the second round of the MLS Supplemental Draft in January 2011. The midfielder worked with the team for a few months, but a toe injury all but ended his professional hopes. He has an advertising job in Birmingham, so he can't make the away games, nor every practice. He plays for fun, now.

Saydee is the only one still working for a professional playing career.

Despite turning 20 in March, Saydee already spent four years at MSU. In the winter, he made it past first cuts and into camp with Sporting KC of MLS. He recorded an assist in an exhibition game in February.

"I was with Kansas City for a little bit, and then I came back. I got in touch with Kylie, and he was telling me about this club starting up," Saydee said. "I figured it wouldn't hurt if I trained with the guys and played in games. I've been enjoying it ever since."

Stannard sold Detroit City to Saydee as an opportunity to stay in shape and keep playing professional soccer. Stannard says players must make at least one (of typically three) practices per week. Despite having another job, Saydee makes it as much as possible.

"I talked to Cyrus because he's still waiting to see other opportunities to open up right now," Stannard said. "He plays in a men's league and things like that around Lansing, but obviously that's not as good of a level. So I just talked to him. I said, ‘Make it when you can, and as much as you can. It will be a good level. It will keep your fit, it will keep you sharp.' You never know. Sometimes the exposure you get with these minor league-type teams, you never know who's watching, and it could lead to some things." 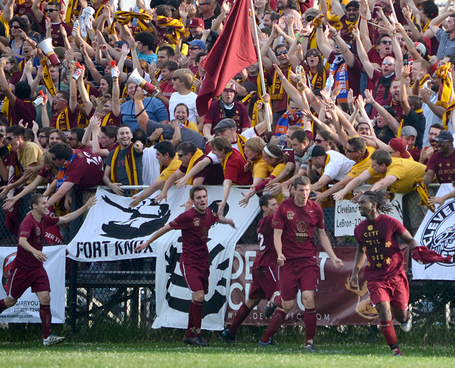 Moments after a record crowd of 1,743 is announced, a defensive breakdown allows Cleveland to score the tying goal in the 85th minute. Cleveland players run by the Detroit City supporters. The players' taunts are answered with boos, middle fingers, swearing, and even a few beer cans. Some not empty.

All in good fun.

The future is uncertain, but bright. The support has steadily increased throughout the season. By most accounts, the first-year club has one of the best fanbases in the NPSL. There have been talks about groups in the area trying to bring an MLS expansion team to Detroit down the road. But the city's economic woes come first.

In order to get an MLS team, a soccer-only stadium must be built. The Pontiac Silverdome has been brought up as a possible home, but nothing seems to be on the horizon anytime soon. However, Stannard agreed that the city could add another professional team within the next 10 years. The core fanbase is there, and soccer has been on the rise in the U.S. In June 2011, a crowd of 28,209 watched the U.S. Men's National Team earn a 2-0 win over Canada at Ford Field.

Detroit City's final regular season home game is at 4 p.m. on Sunday, July 1 against the Erie Admirals. Tickets for home games are $5 and purchased at the gate. If you don't buy a Detroit City T-shirt or scarf, you'll look out of place. Anyone is welcome on the supporters side, but bring some energy and noise.

There also will be some friendlies and the playoffs - for which Detroit City has already qualified. Stannard said the club will host a friendly against the MLS' Columbus Crew in July, and a few Spartans are playing for Columbus right now, including rising sophomore Adam Montague. 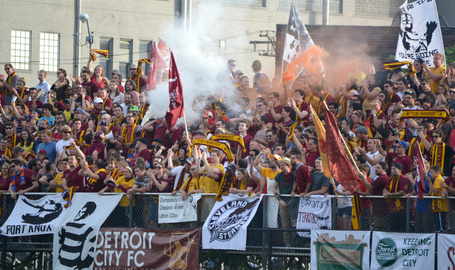 Thompson, Rogers and Clark all are from the Detroit area, and never imagined their soccer playing would keep them together down this road.

The team is split about 60-40 between current and former college players. The Spartans have helped build a solid foundation for a club that hopes to start some camps and increase its popularity in the city. Stannard didn't think he'd be a head coach for a while, especially coaching his former players. But the club has provided another opportunity for everyone involved.

"It's been really fun," Stannard said. "Obviously, I have a relationship with them, and they with me, so there's a mutual understanding and respect, and that has been an important core. We know each other, I've seen them in so many different atmospheres, I know what I'm going to get out of them. It takes longer for the guys I'm not familiar with, seeing them in close games and important games and pressure situations and see how they react.

"That's one of the tough things about summer teams ... That's why having the core of MSU guys there has been so important to build around."

No one really knows what their individual future holds with the club. Once the season ends, the future will be addressed more. Thompson doesn't see soccer in his long-term future, but he has no regrets with how things have turned out.

"Not at all. It was fun to have that (professional) experience, but I've moved on to different things and am enjoying what I'm doing now."