Share All sharing options for: Random MSU Photo Of The Week - Rally At State Capitol After Win Over Ohio State (1912) 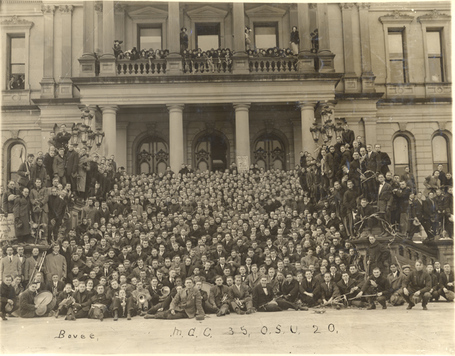 This photograph shows a large group of students gathered for a victory rally at the state capital after a MAC vs OSU football game on November 28, 1912. The photograph was taken in front of the Capitol building in Lansing, Michigan. The text on the front reads: "M.A.C. 35, O.S.U. 20." The text on the back reads: "Victory rally after MAC/OSU Game Nov. 28, 1912."

The win over Ohio State in Columbus capped a 7-1 season under head coach John Macklin. It was the school's first-ever win over a Big Ten team and the first meeting between MSU and OSU.