Over the course of the 2011-2012 Michigan State basketball, it became fashionable to view Derrick Nix and Adreian Payne as a single entity. (This is one of the few fashions I have ever played a role in popularizng.) And that entity performed quite nicely: averaging 15 points and 8 rebounds in 37 minutes per game, despite playing next to the most productive power forward in the country. 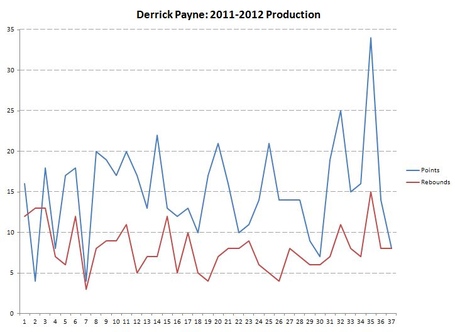 Down the stretch, Tom Izzo got between 10 and 20 points and between 5 and 10 rebounds from his two-headed center in almost every game. In a season in which just about everything went right, the emergence of both Nix and Payne as significant low-post factors ranked near the top. As Con-T pointed out in the Payne post, though, the two of them won't be able to just sub in and out for each other next season--at least if the team is going to maximize its production up front. Payne will shift more to the 4-spot, and the two of them will play next to each other for maybe 10 minutes per game.

So let's decouple the "Derrick" from the "Payne" and look at Nix's development on a stand alone basis. At this time last year, Con-T was expressing concern about the lack of uptick in Nix's numbers from his freshman season to his sophomore season:

Nix managed to bump up his offensive rating while slightly increasing his usage rate (20.8% compared to 19.7% last year), so he was, on balance, a little more effective on the offensive end this year. He did this primarily by improving his shot selection and his free-throw shooting. Gone are the memories of his 27% on foul shots last year. . .

The problem of course was that Nix couldn't get or stay on the court. He entirely missed the three games in Maui when he stayed home after a spat with Tom Izzo over his role, playing time or nobody's-really-sure-what. He was also a DNP-CD for the first Northwestern game, for reasons that are not entirely clear. In the remainder of the games he averaged only 8 minutes per game, due to match-ups, his conditioning, or Izzo's rotations.

As a junior, Nix did, in fact, stay on the court for long stretches--playing nearly 50% of available minutes:

On top of that, Nix made further strides in his offensive game, bumping his offensive rating up 8 points while also becoming the second most assertive offensive player on the roster, behind only Draymond Green. His rebound numbers dipped somewhat--probably as a result of having to pace himself a little more--but were still within an acceptable range, particularly on the offensive end. And his steal/block numbers were again solid for a player of his dimensions. I would concur with Patrick's appraisal of Nix's overall progress on defense:

Most surprisingly, by the end of the season, he became not only a serviceable defensive player, but a really good one. Few big men in the country defend the screen/roll as well as Nix does. Again, that is up there on the list of top candidates for the 'sentences I never thought I'd write' list.

Going into his senior campaign, Nix's challenges are three-fold. First and foremost, he needs to again put off-court issues to rest, having pled guilty to operating a vehicle in the presence of drugs and marijuana possession this past April. All signs indicate he's on the right path there.

Second, he'll need to take another leap in terms of conditioning so he can push his minutes per game up toward 25 or so per game. He was able to play 23-26 minutes in a game eight times last season, so the potential is there. And recent in-person eyeballing of his physique has yielded positive reports.

Third, Nix will need to take another step upward in terms of offensive assertiveness. It won't need to be a huge one, but with Green's graduation, Nix becomes the first option when the team decides to get the ball down on the block. The biggest opportunity for improvement will be to bump up his free throw rate from the fairly pedestrian 32.0 he posted this past season. He won't get back to the astronomical small-sample-based figures of his first two season, but he could easily get that figure up over 40 as opponents have to deal with his offensive moves more than 5 or 6 times per game.

To close, an atypical-but-memorable Derrick Nix highlight from the 2011-2012 campaign: