Sure, individual football stats are fun. We all know what 100 rushing yards for a running back or 300 passing yards for a quarterback mean, but there's no elegance to the overall statistical framework of the game the way there is for basketball.

This is really just a function of football being a very complicated game. The specialization among the players and inherent team-reliant nature of individual performances make statistical comparisons between players less valid. And the large degree of variance between the different situations in which plays are undertaken creates a lot of skewing. A team that plays with a lot of big leads will select its plays a lot differently than a team that has to play from behind all season.

The good people at Football Outsiders have done a magnificent job of accounting for all this in their advanced metrics, but those metrics are fairly clunky in terms of providing an intuitive sense of on-field performance. (Example: MSU was 8.0% good on defense last season.) That makes them hard to use in writing intended for general audiences (or at least audiences unwilling to spend more than 15 minutes studying the statistical glossary).

I can offer no comprehensive solution to this quandary, so instead I'll suggest a more modest adjustment: stop counting negative sack yardage in rushing totals. College football box scores classify all yardage gained/lost as either rushing or passing. If you don't attempt to pass the ball, then the result of the play goes into the "rushing" category--even though a quarterback who gets sacked clearly wasn't attempting to rush the ball.

And it's not as if scorekeepers aren't making that judgment--sack yardage is specifically tracked in the box scores and does not include all instances where a quarterback gets tackled behind the line. A loss of yardage on a clear designed quarterback run isn't scored as a sack. So just go ahead and count the sack yardage against the passing numbers, like they do in the NFL. The reality of any given football game is complicated enough without calling some of the plays conducted in the game something they're clearly not.

(I'm not the first person to recognize this idiosyncrasy of college football scorekeeping. Brian normally makes these adjustments in his treatise-length game previews. But I am, to my knowledge, the first person to write up a full blogger rant on the topic.)

If we take this philosophy, apply it to the offensive numbers Big Ten teams put up last season (conference games only, Gasaway-style), and (of course) scatterplot it, we get this: 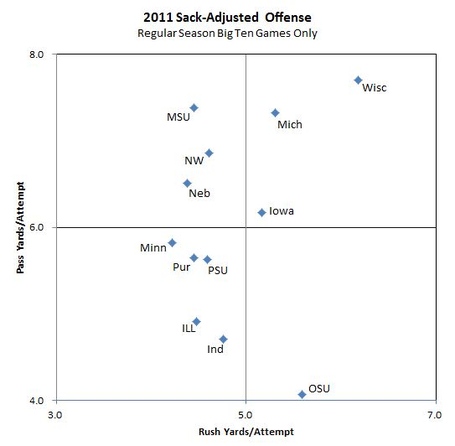 Note that the scales the horizontal and vertical axes run along are closer to each other than you might have guessed. Football fans are often pass crazed--why not throw for an average of 7 or 8 yards per attempt instead of running for 4 or 5 yards per attempt? Adjusting for sack yardage leaves the differential between average yards per attempt at just a single yard (6.1 vs. 4.9). That remaining difference can be explained away by (1) the risk of throwing an interception, which isn't accounted for above, (you can fumble the ball either way) and (2) the fact that running the ball generally gets you positive yardage more consistently than passing it does, which is useful for accumulating first downs and keeping drives alive.

Your major outlier here is Ohio State, which somehow allowed opposing defenses to sack the quarterback on 21.1% of intended passing attempts (pass attempts plus sacks). The traditional stats credit the Buckeyes with 6.6 yards per pass attempt and 4.5 yards per rush attempt. As illustrated above, though, they clearly experienced more success when they attempted to advance the ball with their legs than with the arm of Braxton Miller or Joe Bauserman. 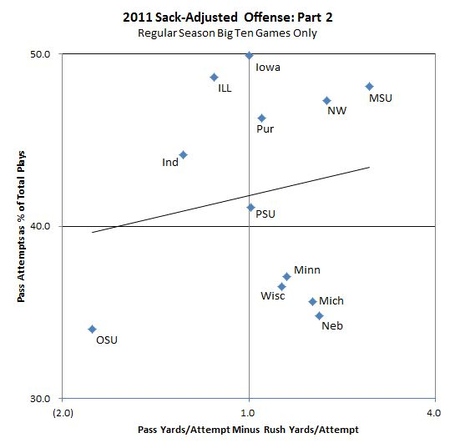