Share All sharing options for: Football Scatterplottin': The Sequel 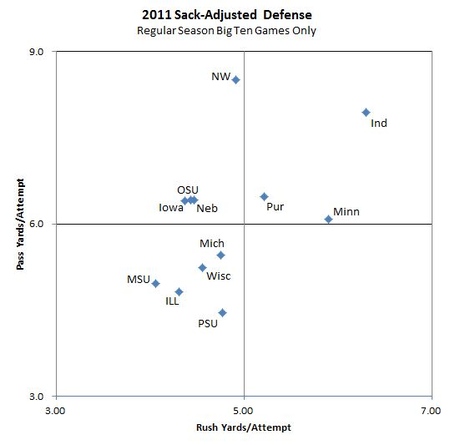 Bullets after the jump: 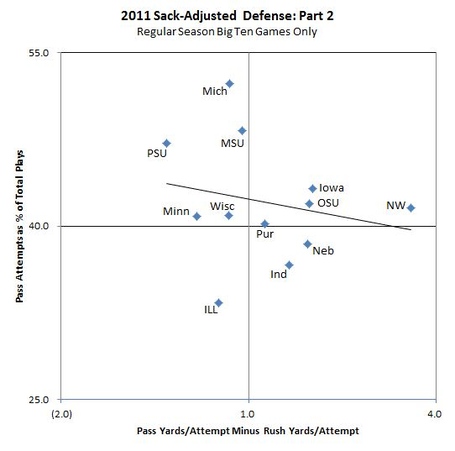 Big picture finding: Teams pass more not so much when opposing pass defense is weaker, but when the opponent is a better team overall and, therefore, probably has the lead. The exception is the Wisconsin, against whom opponent were probably just paranoid about keeping Russell Wilson and Montee Ball off the field.

Finally, for conversational purposes only, here are my predicted 2012 Big Ten standings:

LEADERS SOUTH
Title game: Michigan over Wisconsin****
*Advances to title game on tie-breaker (head-to-head wins over both MSU and Iowa)
**Playing only for the love of the game
***Go big or stay home (loses to MSU in conference opener; runs table thereafter)
****I got yer reverse jinx right here, buddy (ON THAT NOTE EVERYONE NEEDS TO STOP PICKING MSU TO GO TO THE ROSE BOWL. WE'VE GOT FEWER QUESTION MARKS THAN OTHER CONTENDERS BUT THEY'RE BIG QUESTION MARKS AND IT MAKES ME NERVOUS AND I DON'T LIKE IT SO STOP IT.)
/attempts to take 100-hour nap