Share All sharing options for: The Mark Dantonio Era, Charted

Are you like me? When you're anxious for a big event, do you find yourself opening up Excel, sorting columns of data, and building some charts to kill the time? No? You don't? OK, WEIRDO.

Anyways, following up on my two recent sack-adjusted Big Ten football data posts, I thought I'd go back and pull the same numbers for the last five MSU seasons to provide a sense of how the program has developed under Mark Dantonio's watch. These are full season numbers; the conference-only data aren't as readily available for prior years. I'll keep the commentary short. This is more an exercise is establishing the baseline than it is trying to make spectacular trend-based predictions.

Note that the major parts of the game these charts don't cover--fumbles and special teams--are often key determinants in any particular game but are also the most random parts of the football equation. With the exception of kickoff and punting average, I'm not convinced even a full season of data gets you a statistically significant sample unless you've got a real game changer in one of those areas on your roster. 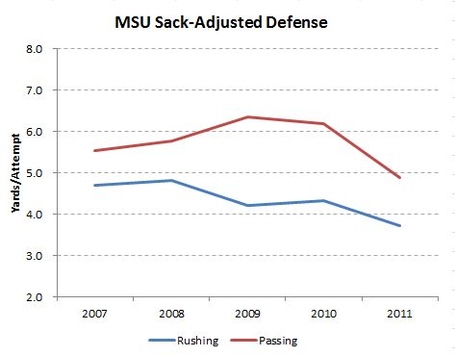 The run defense has shown steady improvement over the five years. The pass defense took a giant leap from the 2009 (and, to a lesser extent, 2010) "Sure, take whichever 10 yards you'd like, kind sir" version to the 2011 "YOU SHALL NOT PASS!" edition.

Not graphed: 2009 was the only season opponents' Pass% (pass attempts divided by total plays) was outside the 49-53% range; the figure was 56% that season as opposing offensive coordinators' eyes got real big when they saw the MSU pass defense. 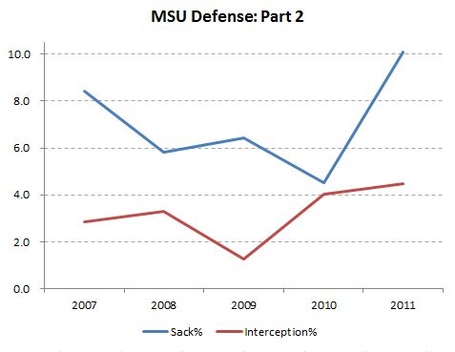 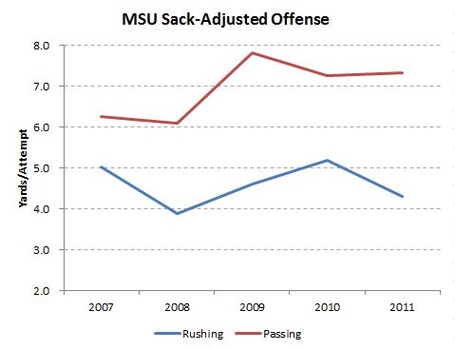 Cousins > Hoyer is the clearest story here. On the rushing side, Ringer/Caulrick made the 2007 offense go. The 2008 rushing data point is a little misleading since the offensive game plan that year was "Javon Ringer, four yards, and a cloud of dust." (Although MSU's Rush% wasn't off the charts that year: 53.5% vs. 56.5% in 2007. The play calling on standard downs was fairly predictable, though, IIRC. That percentage dropped to the 48-51% range during the Cousins years.) 2009 and 2010 featured a more diversified rushing attack. The 2011 drop in rushing efficiency was on the offensive line since the running back group didn't change from the prior year. 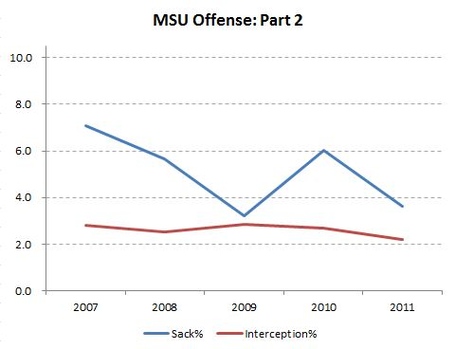 Interceptions haven't been a widespread problem in any of the five years, although there have been a few key ones we'd like back. Scroll down for Sack% commentary.

Bonus chart: reorganizing the two broad (and imperfect) indicators for offensive line play (and inverting the Sack % plot to make higher equal better). The O-line has yet to put it all together in a single year. The years the run game has averaged 5 yards per pop, the pass blocking has been subpar. And the years they've held the Sack% number below 4, the run blocking has been mediocre. (2008 was just all around meh.) The 2012 O-line is getting a lot of love from national observers based largely on returning 4 of 5 starters. To really be a top five line nationally, they'll need to excel in both phases of the game this time around. That a possibility given what should be a more experienced and cohesive unit, but not a guarantee given that none of the return starters are established difference makers.