Before I came over to The Only Colors, I ran another blog, Green Thoughts, where my favorite posts were "Random MSU Photos of the Day."

I frequently shared photos from MSU's archives page after I received written approval to use them. Eventually, I started to run out of good photos, so I made it a three-days-a-week thing. When I moved over to TOC, I again asked MSU for permission to use the photos. At long last, they've gotten back to me and given me the written approval.

So, I will start posting a "Random MSU Photo of the Week" on Friday afternoons. The photos will vary from athletics to campus to just really weird things.

For the first TOC photo of the week, we have President Theodore Roosevelt speaking on campus in 1907. To celebrate the 50th anniversary of the opening of Michigan Agricultural College, Roosevelt was invited to make the commencement address. 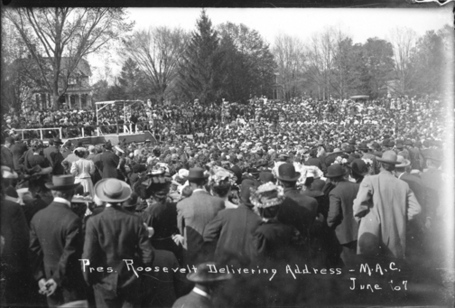 Before a crowd of about 20,000 people. Roosevelt began his speech. He emphasized the importance of agriculture in an economy shifting into industry. He also discussed the dignity of manual labor and the importance of family. Roosevelt concluded by emphasizing the "happiness" of performing one's duty, not shirking it. He then personally handed a diploma to each graduate, including Myrtle Craig, MAC's first African American alumnus.

Fun fact related to this speech:

"While at M.A.C. (Forest H. Akers) was a star pitcher for the baseball team. In 1908 he was expelled from M.A.C. for, as Akers put it, 'raising too much hell.' His expulsion, in part, stemmed from a 1907 incident. During a speech by President Theodore Roosevelt, a powder keg exploded, shattering the windows in nearby dormitories and the college's greenhouses. Akers was accused of spearheading this prank, a charge he adamantly denied."

Akers later became a big business success and an MSU trustee and donated a lot of money to the school. Akers Hall and the golf courses are named after him.

More fun stuff: Here's an audio file of a speech Roosevelt made to the Michigan Legislature before the MAC speech.

I hope you enjoy the weekly photos as much as I love finding them.