Recap: Taking Down The Underdog Goliath

Share All sharing options for: Recap: Taking Down The Underdog Goliath

Given the fact I watched the game from the southwest corner of Spartan Stadium, my insight is only as good as my view was, plus looking at the box score, so bear with me.

I'm also writing this at a lake house with spotty internet (holiday!), so I don't have many tweets or links to put in here. We'll put plenty of that in Monday's link post.

Any win over Boise State is a good win, plain and simple. When you look at the stats, the game shouldn't have even been close, but that's how critical some of MSU's offensive mistakes were. A national title is a longshot and Friday's game likely didn't have any affect on #P4RB, but it was big win for the program in front of a national audience, and got an exciting season off to a great start.

First, Looking back at my keys to the game:

Offensive line lives up to the hype: While Le'Veon Bell got all the headlines, the offensive line appeared to do a solid job in the run game. On the other hand, Maxwell seemed to be under pressure quite a bit, despite not getting sacked. Having watched from the stands, that's about all I can say about the line.

Andrew Maxwell doesn't falter in the spotlight: Terrible first half, solid second half. More detail below.

Defense sticks to assignments: Beat on a reverse and some trick plays, but other than that, very sound coverage.

Trickeration: The Broncos completed a couple trick plays, but they weren't big enough for a score or much of a spark.

Now, breaking down both sides of the ball, special teams and the scoreboards.

Simply put, Maxwell in the first half is what everyone feared, while Maxwell in the second half what everyone wanted. In the first half, Maxwell made bad decisions and missed a few receivers. Although the first interception wasn't his fault, the other two were. On the pick-six, he didn't really diagnose a blitz and should have taken a sack or thrown the ball in the dirt. The interception at the end of the half was pretty self-explanatory as a bad throw.

It got to a point in the first half where fans in my section where terrified when the offense had the ball. But as much as the first half got me worried for the rest of the season, the second half was the opposite. In the second, Maxwell made a lot of check-downs and short throws to build his confidence. He didn't try to make many big plays, and he didn't make any crippling mistakes. That's all MSU needs with the running game and defense.

He has a bit of a Brett Favre in him, too. We know he has arm strength, often throwing too hard for his receivers. That should be some first-game jitters, and he'll put a little more touch on throws as things go along.

There's not really anything left to be said. Suddenly, Bell's return next season seems as likely as Will Gholston's. The spin moves, the power, the hudling; all incredible to watch. Bell has taken a big step forward with each season after being a two-star recruit, and he has now burst onto the national scene, getting himself in the Heisman conversation after one game.

The obvious worry is his health. Javon Ringer didn't suffer a major injury in 2008, but he clearly wore down by the end of the season. The good news is that the passing game should improve and there shouldn't be a need for 40 carries. Larry Caper has the ability as a No. 2, but with Bell picking up five yards every single time, MSU just couldn't afford to take him out.

Much like at quarterback, there were good and bad signs. Sure, Tony Lippett had a bobble that led to an interception and a bad fumble after a 35-yard catch, but he also was able to get open quite a few times. It really looked like first-game jitters from a lot of people, but especially the receivers. The only players Maxwell had any confidence throwing to were Bell (6 catches, 55 yards) and Sims - who is the all-important weapon I wrote about earlier.

As expected, there were flashes of great things to come, but it'll only fully arrive with experience.

One week in, the defense has certainly lived up to the hype. Whenever Boise State picked up a first down, it felt like a defeat. The bar has been set that high.

MSU didn't record a sack, but much of that was because Joe Southwick (15-for-31, 0 TDs, 1 INT) did a great job of getting the ball out of his hands quickly. Also, from my vantage point, it didn't look like MSU blitzed as much as normal, but I could be wrong. I couldn't see much of the defensive line, other than Gholston getting held on what seemed like every play.

The Boise State strategy downfield clearly was to attack Dennard, who held his own pretty well while being left on an island quite a few times. I remember Jarius Jones missing an assignment or two, but he fit in just fine otherwise.

MSU was beat with a couple trick plays, as I expected, but they weren't crippling mistakes. The defense gave up fewer points (6) than the offense (7) and helped the offense get through first-game growing pains.

I guess Conroy's miss made up for the make. Not really much to go off for Sadler. The kickoff coverage seemed pretty good with the new rule, while Nick Hill picked up where he left off as a solid return man.

Now, back to that new kickoff rule. If the goal was to prevent collisions and injuries, mission failed. Big time. All throughout college football, teams are popping up kicks and relying on their coverage. I wouldn't be surprised if this rule is adjusted next season. Just put the touchback at the 20 and let the kids boom it if you want to take away the collisions. 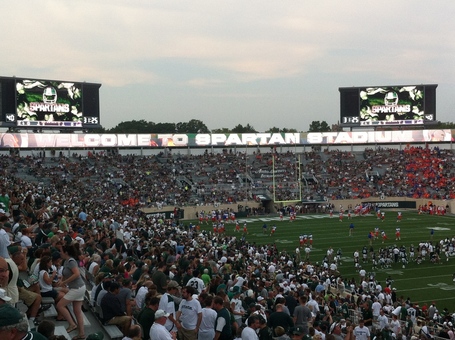 I kind of thought about this when I saw pictures of them being built, but it almost seems like too much screen. Without a doubt, it was a necessary update, but sitting in the southwest corner, I was blinded by a white screen in the video wall in the north endzone a few times. I could see the replays in the opposite endzone just fine, but it was still a reflex to turn and look at the south board. As for that monster south board, I was disappointed they weren't used for live stats. The stadium showed stats at the same frequency it used to. Most of the sides of the big board were for ads.

For those of you who weren't at the game, the long video wall on the north side is basically just for ads, which is what was expected. You have to pay for the rest of everything somehow. It was just weird getting ready for a third down and seeing a huge ad for chocolate milk taking my attention.

But all in all, they're beautiful, they're real and they're spectactular.