(Technical: Sack-adjusted. Excludes the two drives to end each half. MSU's turnover wasn't really a turnover.)

The defense wasn't perfect. They gave up some big runs to the outside again, and they failed to create a turnover (partly because they didn't hold on to the one they did create, and partly because Brian Kelly clearly wasn't going to risk losing the game on a turnover in the second half), but you really can't pin any of this loss on that side of the ball. They gave up 17 points on the 11 drives that started on the MSU side of the field--and both touchdowns came when the Irish got the ball just one yard to the MSU side of midfield. They almost completely shut down Tyler Eifert (zero catches; one pass interference call) and held Notre Dame to just one third down conversion in 14 tries, continually giving the offense additional chances to get the team back into the game.

Yes, the defense has only posted 2 sacks in three games (one for 2 yards on a Everett Golson scramble in this one), but it's also posted a disruption percentage of 25%+ in all three games. The interior line is a concern, but the rest of the defense is making plays.

On offense, meanwhile, there's plenty of blame to go around--everywhere but in Le'Veon Bell's direction (and even he dropped a couple catchable passes). It's hard to nail down exactly how much of the blame should be allocated between Andrew Maxwell, the receivers, and the offensive line. I'd put Maxwell third (taking a sack is marginally better than throwing into coverage under pressure, so there's that) and call the other two position groups a statistical tie. The line, I guess, has two excuses built in--the late-breaking Fou Fonoti injury and the fact that the ND front seven is much more highly touted than the secondary--but those don't excuse the complete lack of rhythm for 60 minutes. Put it all together and you get an ND disruption percentage of 28.6% (6 TFLs, 1 FF, 6 QBH, 8 PBR) and zero MSU drives of 50 yards or more.

In short, it all went wrong on offense. And it would have taken an awful lot to make to go right. Nevertheless, there are grievances:

The passing game didn't make big plays--but that's partly because the coaching staff chose at some point to stop trying to make them. Put it on Dan Roushar if you want, but these big picture strategic choices ultimately fall on the head coach. For as much as Mark Dantonio has shown gutsiness on trick plays and 4th-and-1 calls, he's still got some Tressel in him. If you're going to lose, at least lose knowing you took more than a couple shots at the game changing play, even if that means another couple sacks or a turnover. We still don't know a lot about Maxwell, but we know he can air it out. And now I've aired it all out--or most of it, at least.

Heck Dorland Fantasy Camp. You know it's bad when even I can pick out the Xs-and-Os issues. Anyone surprised that trying to pass out of this formation might lead to one of the four sacks MSU gave up? 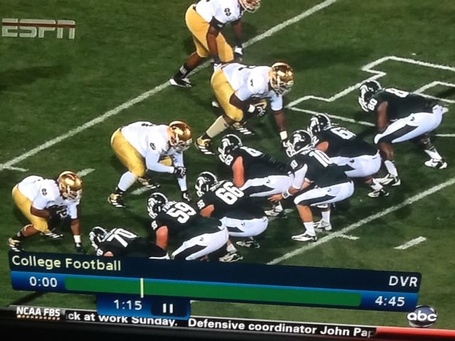 What might surprise you is that the sacker, who was of the non-blitzing variety, came through the side with the two offensive tackles (Skyler Burkland/70 and Dan France/59) positioned on it. (That's Dion Sims/80 on the other end; the unbalanced line revisited!) To be fair, Burkland was making what was close to an emergency start--but that might be a reason to simplify offensive line responsibilities, no? Not the kind of inventiveness we needed. Fonoti's out six-plus weeks; the coaching staff and the linemen will need to pull it together in the next two weeks.

Le'Veon-Going-Busted Watch. Well he's now down to 324 projected carries over 12 games. Of course, his carries were lower in this game for all the wrong reasons. And he was targeted 8 times in the passing game (catching 4 of them).

Maybe I didn't beat up on the receivers enough above. Overall, 22 of Maxwell's 45 pass attempts targeted running backs and tight ends. As good an indicator of the passing game's problems as any. Keith Mumphrey (6 catches for 71 yards) was the only wide receiver Maxwell had any rapport with. Other wideouts combined for just 26 yards on 5 catches (with two donuts for Fowler). You wonder how much of the receiving issues the coaching staff saw coming, which would help explain the decision to burn the redshirts on Aaron Burbridge and Macgarrett Kings last week. Very little separation anywhere (which, yes, reduces the power of my griping in the lede).

Penalty Watch. Five for 56: two on the offense (both on Burkland), one on the defense, two on special teams. Stop trying to block punts, please.

Just boot it through back of the the end zone, please. Minor factor is minor, but I think the staff can stop telling Kevin Muma to try to kick ball high to the goal line because of the new kickoff rules. Opponents are averaging 23.5 yards per return so they're basically getting right back out to the 25. And you're risking a long return at some point. (As for placekicking, I'll worry about that when it costs us a game. Small sample size and all that. And what are you going to do about it?)

Thinking outside the boxscore. Putting aside the apparently-now-unkillable idiotic first down chant, the student section deserves some credit. The section stayed near capacity well into the second half and was quite loud when the rest of the stadium had fallen into a punting-induced zombie-like trance.

What it all means going forward. Well, as every media guy and his brother has pointed out, it doesn't have any direct impact on our Rose Bowl hopes. So yay for that. But it certainly throws the fundamental quality of the team and the outlook for the conference season into major question. You may recall the Twitter bit from last week about how MSU was favored in every remaining game based on Sagarin ratings. Here are current projected scorelines based on updated Sagarin ratings (+ is good):

Not so much now. That could still be 8-0 if everything breaks just right. But it could also easily be 4-4. (I'm going to avoid thinking about complete disaster scenarios for now.)

Thank goodness Boise State went for nearly 600 yards of offense on Saturday, or we'd have absolutely nothing to hang our hats on at the moment.

Elsewhere, legitimate human emotions. Relative to most sports-related narratives, this is pretty affecting. Best of everything to Mr. Te'o, particularly since we don't have to ever play against him again. Four-months-later update: NEVERMIND GAHHHHHHH.