Share All sharing options for: Picture Paged- 4th and FFS

Video is from here

I've been saying for a while now that this MSU defense is plenty fast, and plenty physical, but where they often really distinguish themselves from other units is their smarts and their sense of positioning. If a lot of times it seems like MSU has a guy just in the right place to blow up a screen, or break up a pass, or stop a developing run, it's because they often do. And if Bullough, Norman, and Lewis usually seem to be doing a lot of yelling, and arm motioning after the other team shifts, or before they snap, it's because usually one of them has seen something they can exploit, or something they can be exploited for. Which is why this one play is driving me, and apparently Dantonio, bonkers.

The score is 14-3 It's 4th and 1, Notre Dame ball, with 8 minutes left in the game. The ball is on the MSU 37 yard line. If MSU could stop Notre Dame here, they'd be down just 11, with the ball, and with their best starting field position of the game (which, man...).

Kelly has just called a timeout, so MSU has the liberty to put any defense they want out onto the field. They've chosen a 5-3 'Bear' front with two safeties in the back three secondary. If ANYTHING is going to be able to cover a run play, it should probably be this formation. 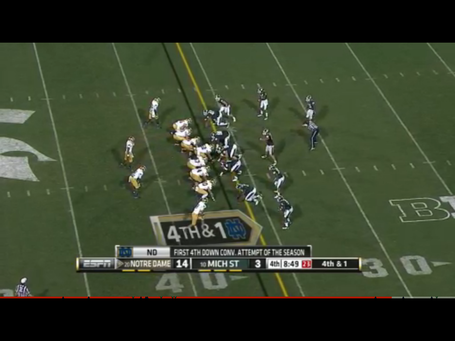 This is ND's opening look. MSU probably isn't aligned ideally, here, but you have to respect the wingback at the top of the screen, as well as Golson as a running threat on a roll-out, bootleg, or speed option. But then Notre Dame motions and... 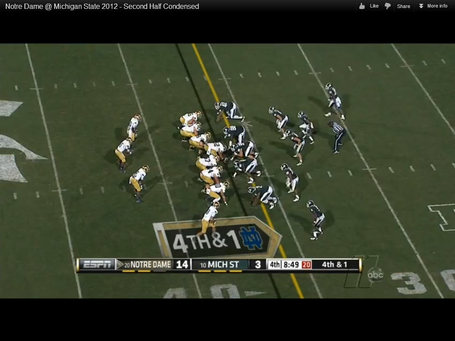 I'm starting to feel a lot less okay with MSU's pre-snap leverage now. It's totally fine that Kyler Elsworth is over there covering a quick toss or option towards the top of the screen, and for similar reasons Jairus Jones playing last-line-of-defense is understandable. But what's Johnny Adams doing in between Elsworth and Bullough?

Man, I sure hope Notre Dame is gonna run to the left.

Th-There not gonna run to the left, are they? 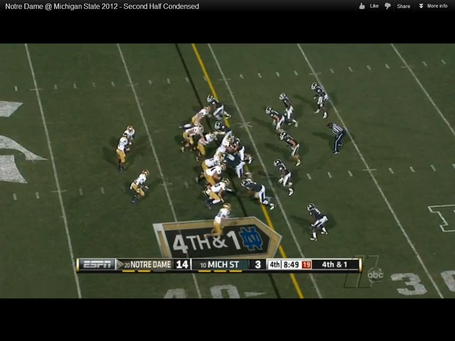 Zone read. And while there's a chance Golson keeps here, the handoff to Cierre Wood, who'd been running strong on this drive, is probably the more immediate threat, especially considering the direction the line is moving. Blocking from the ND OL is outside zone right. Johnny Adams, for some reason, goes left, outside of Elsworth. ND now has a 5 v. 4 blocker to defender advantage on the play-side of the field, plus the man with the ball.

But maybe this is Adams' job in this scheme and I'm just an idiot, or maybe he just made a mistake. Individual player's can make mistakes and not doom a play. Except... 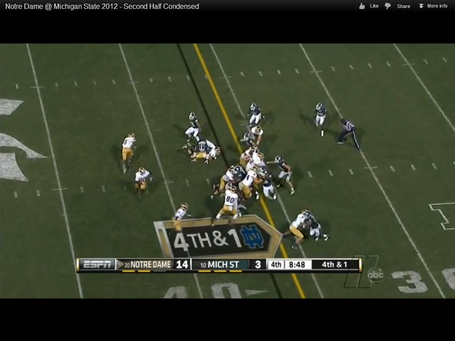 Golson hands off to Wood running right. Now I'm like:

WTF is this line of three players at the top of the screen? Golson has fully three pairs of eyes on him (Rush, Adams, Jones) which is at least one more pair of eyes than is necessary for a player of his running ability. Why are three players shading left against zone read right? I don't know. Why is Elsworth taking this angle that will never, ever get him to the football? I don't know. WHY ARE JOHNNY ADAMS AND JAIRUS JONES BOTH HERE AND NOT, AT LEAST ONE OF THEM, CRASHING DOWN THE LINE TO GET THIS RUNNING BACK? I just don't know. My best justification is that they're trying to protect the wide side of the field and are counting on using the sideline at the bottom of the screen as an extra defender but, man...

The hand-off's just been made and MSU is basically dead. Everyone playside except Bullough is getting blocked straight to hell, and Riddick who's lead blocking for Wood hasn't even hit anyone yet. 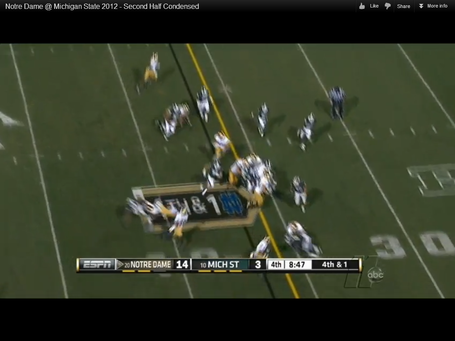 Gholston (I think) can't quite make the play. Riddick goes outside instead of inside (if he puts a body on Bullough here, this might be a touchdown. Wood follows. Maybe Lewis at the bottom of the screen can shed this block from the TE and make a gigantic play but... 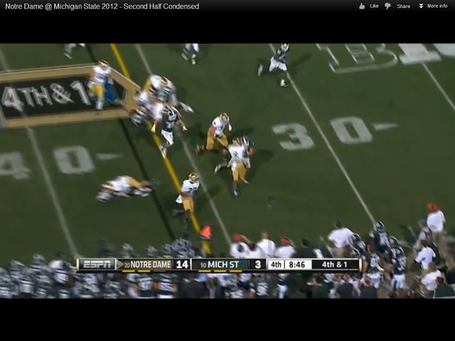 Nope, pancaked. Riddick seals Bullough and that's a 4th down conversion (and more). Notre Dame bleeds two and a half minutes off the game clock and then kicks a field goal to extend their lead to 14. MSU's chances of winning the game go from 'not good' to 'awful'.

Misalignment before the snap leads to a numbers disadvantage at the point of attack that is accentuated by post snap mistakes. Golson's keeper fake takes about 3-4 defenders out of this play. Wood simply follows his blocks for a nice gain and a critical first down. This is terrible defensive play out of a great defense (out of a timeout situation no less!). Coaching error, alignment error, execution error; it's all there.

I mean, ND blocks this play really well, and I could accept that, if I didn't think MSU shot themselves in the foot before this play even got off the ground, which I do.

It's so natural to expect one of this defense's veteran leaders to straighten everybody out, that when it doesn't happen, in a key situation like this, it's surprising and disappointing. If we didn't need them so much to try and win the game later, and if ND didn't just call a timeout, I'd expect one of our coaches to identify this mismatch and get their team off the field to talk about it. This type of defensive front isn't something that MSU deploys often and I think it shows here. Sometimes 4th and 1 isn't about 'who wants it more' but rather who's more alert, and who's able to create the pre-snap advantage. I get the sense that a tired MSU defense mentally cracked a bit here. Understandable, but frustrating.