Today we're talking about the Unbalanced Line, because the alternative is that ND continues to get beaten to death. This is not fun for you to read about anymore and I'm tired of reading/blogging about it. In rewatching the game, there was no single thing where if MSU had done it better the game would have been fine. Most of the time the Offensive Line played ok, when they didn't though it was costly. Most of the time Maxwell played fine, except for when he threw the ball too hard or forced it into coverage. You get the idea, football is a team game and when one player doesn't execute that can torpedo the play for all eleven guys.

So instead, wacky offensive plays. MSU went back to the unbalanced line again in the 2012 version of the game. I wrote a post on this last year which I will shamelessly steal the MS Paint Diagrams of below. Bob Davie also wrote a blog post on this a million years ago back when the Unbalanced Line was some new age spacecraft powered by witches. More from Smart Football, which is probably what you should really be reading in the first place.

Last year, when MSU ran an unbalanced line the look was like this. 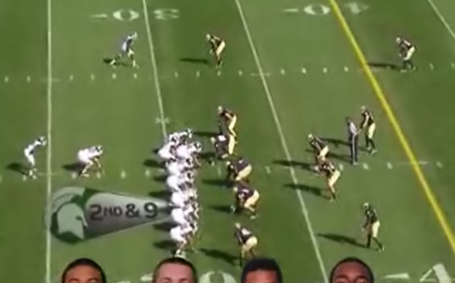 Here's a pic in MS paint. 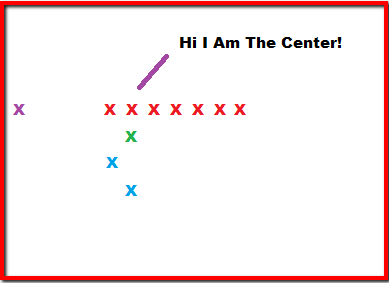 The problem with this configuration last year was that on strongside runs Aaron Lynch got around Chris McDonald(the single Offensive Lineman to the left of center). The OTHER MOAR SERIOUS problem was that in 2011 when MSU ran out of this formation they ran to the left on three of the four plays that I watched. This is the most Dan Roushar thing ever to try and misdirect on a misdirection play. This is the same reason I have Peyton Hillis on my fantasy football team. If Jamaal Charles gets hurt and Hillis regains his 2010 form everything comes up Milhaus.Or you know? I completely overthought myself.

The new look Unbalanced Line has a better chance of success from an X's and O's perspective alone and even had some success on Saturday night.

MSU lines up with an Unbalanced Line in the FB Caper formation. This is the Peanut Butter and Jelly of a Roushar trickeration formation. Burkland is lined up next to France to make the line unbalanced but the new wrinkle that gives this a better chance of success than in 2011 is that Dion Sims is lined up next Chris McDonald to the right of center. This gives them an Offensive Line of Burkland - France - Allen - Jackson(C) - McDonald and Sims. Sims is big enough to play Offensive Tackle so this formation has a bit more promise. 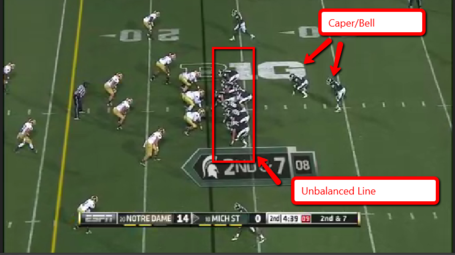 The ball is snapped and Sims goes out for a pass. According to Wikipedia(Source of all truths), Burkland would also be an eligible receiver except his number is between 50 and 79. MSU gets ready to fake the handoff but since Sims is already going out for a pass I'm not really sure what the point of that is unless Maxwell has a run-pass option on this play? 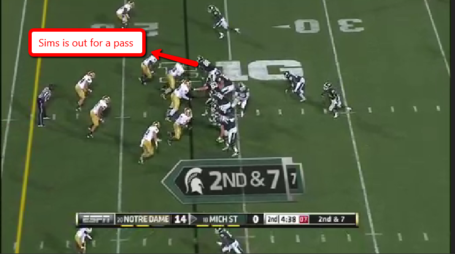 Caper rolls out to the flat, Bell takes the "handoff". 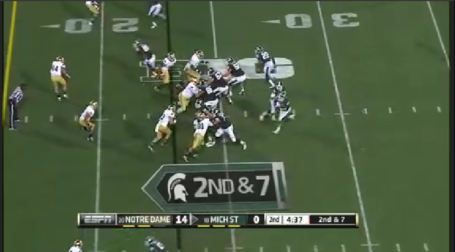 In this shot it looks like Maxwell is going to have eons to throw the ball. Remember last year when Cousins would sometimes have 5-7 seconds to make a throw. It sure looked like this is what Maxwell was going to get. 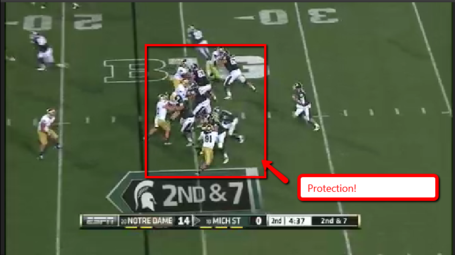 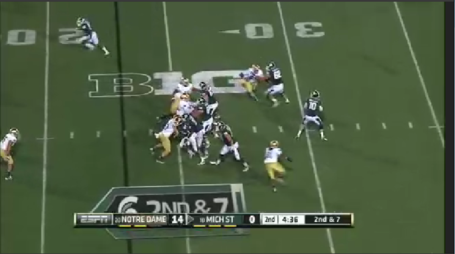 Burkland loses his block on Sheldon Day and Day ends up sacking Maxwell. The strangest thing about this sack is that it looks like Burkland just gives up on the play. This isn't entirely a slam on Burkland, he gives up in such a way I'm left to believe Burkland believed he had help in the backfield and didn't want to get a holding call. 2nd and 7 turns into 3rd and 16. Which might as well have been 3rd and 93 the way MSU was committed to the long ball on Saturday night.

Last year Roushar gave up on the Unbalanced Line too early in the season because it was scapegoated after the ND game. This year one of the major kinks got ironed out in two ways. 1.) Two people are lining up on the weak side of the line instead of one. 2.) Sims is the size of an offensive lineman, if he stays in to run block he'll do fine OR he can go out for a pass. Used judiciously throughout a game, this formation could really help MSU out this year.