So we checked the rules again, and someone does indeed have to win the Big Ten this year. The bettors still think it may well be MSU:

For once, my evaluation of where the MSU football program stands is the same as Mr. Cook's: Say what now? It's hard to see a team that mustered just 6 points over 6 consecutive quarters of football during the last two weeks making a Run for the Roses.

The answer, as Heck noted earlier today, is that MSU doesn't have to be a great team to win the Big Ten this year, it just has to be better than everyone else. And this looks to be one heckuva cripple fight: 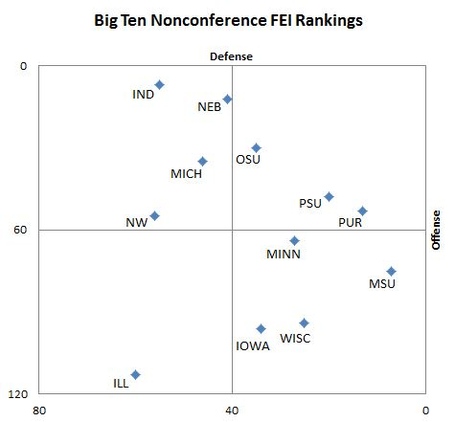 That's based on the latest FEI rankings from Football Outsiders. FEI ratings are opponent-adjusted and based on drive-level data, so they do a nice job of ferreting out how the offensive and defensive units have fared individually when you control for field position, etc. I think they're still utilizing some information from last season, but they clearly account heavily for the current-season stink (see: Wisconsin offense).

That scatterplot is actually too kind in terms of putting teams into the upper, right-hand "balanced/good" quadrant, since I had to elongate the offensive axis to account for how horrific Illinois, Iowa, and Wisconsin have been trying to move the ball. If you cut those three teams out and set a national ranking of #40 as the dividing line for both axes, you get this: 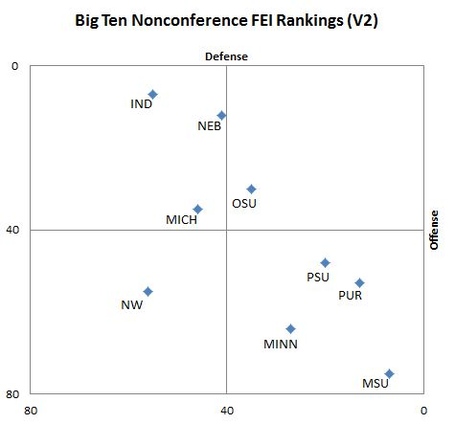 Ohio State is the only team showing above average quality on both offense and defense--and only just barely in both cases. Also, as you may be aware, the Buckeyes are not eligible to participate in post-November festivities this year. Of the other eight teams shown, four look they're good at defense and not so good at offense (including also-not-eligible Penn State), three look like they're good at offense and not so good at defense, and one looks to be mediocre at both (three narrow wins over BCS league opponents be darned).

Prepare yourself for some defense-oriented and just plain weird-looking football, folks.

The overall FEI rankings also pin MSU (#12) and Nebraska (#14) as the two best teams in the conference (OSU is third at #25), although I'd suggest that when you've got such disparate rankings on the two sides of the ball, the overall rankings may be less reliable. This isn't baseball where scoring and preventing scoring have almost no impact on each other. If the MSU offense continually puts the defense in a bad spot, the defense won't be able to hold forever (as we've seen the last two weeks).

To close, I'll republish my comments from Heck's Thread of Great Optimism: Every Big Ten team has shown a major weakness. In our case, though, it’s the weakness you’d expect to see based on a lack of experience (the passing game). In theory, that means our weakness is more likely to resolve itself than everybody else’s weaknesses are as players adapt to starting roles. In theory. I wouldn't book plane tickets to Pasadena quite yet.