Mining the Box Score: Le'Veon Unlimited (But Probably Not Really)

Share All sharing options for: Mining the Box Score: Le'Veon Unlimited (But Probably Not Really)

The story of MSU's performance on offense Friday night has been told, and told well: Le'Veon left, Le'Veon right, Le'Veon up the middle. Michigan State snapped the ball 88 times against Boise State with the intention of advancing the football. On 50 of those plays, the ball ended up in Le'Veon Bell's hands, with a Bronco defender eventually bringing him to the ground on nearly all of those touches.

It was an effective and appropriate gameplan given the quality of the opponent and the inexperience of MSU's quarterback, but it's not exactly a sustainable strategy. If Bell were to carry the ball 44 times per game (he also caught 6 passes), that would equate to 528 carries over 12 games. While he certainly won't come close to that number, the danger here is that Mark Dantonio has tried to raise the running back workload bar before.

The numbers strongly imply that the frequency with which Ringer was tackled in 2008 took a toll as the season progressed: 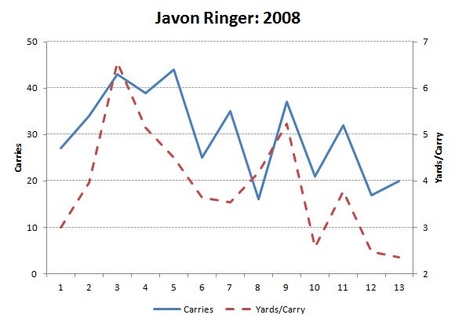 After averaging 4.9 yards/carry on 143 carries in MSU four nonconference games, Ringer averaged just 2.9 yards/carry on 90 carries in the team's final four games (including the bowl game). While the quality of the opposing defenses MSU faced at the end of the season no doubt played a role in that decline in productivity, it's hard to argue the heavy workload Ringer endured early in the season wasn't a factor, as well.

The good folks at Football Outsiders have chronicled the issues that tend to follow heavy workload seasons for NFL running backs:

The 370-carry theory is generally summarized as follows: "A running back with 370 or more carries during the regular season will usually suffer either a major injury or loss of effectiveness the following year, unless he is named Eric Dickerson."

For what it's worth, the 12-game equivalent of 370 carries is 278. That's also right in the ballpark of where he'd need to be to not exceed the maximum workload for major conference backs over the last two seasons. If we set Bell's limit at 278, he can average no more than 21.3 carries per game over the next 11 games. And that ignores the fact Bell figures to factor into the passing game more frequently than the typical feature back.

Assuming things go to plan in Mount Pleasant, I vote to limit Bell to about 15 carries (as opposed to, say, the 34 Ringer had vs. EMU in 2008) and give Larry Caper and Nick Hill (both of whom are significant upgrades from the 2008 back-ups) some chances to carry the rock. Again, I'm not knocking the Week 1 gameplan given the situation, but a diversified rushing attack in the coming weeks is going to be much better for both team success this season and Bell's long-term future.

The Heisman hype is fun, but let's not let the headlines drive the playcalling. (Also: The experiences of our own quarterback in 2006 and the quarterback in Ann Arbor the past two seasons should serve as cautionary tales to anyone printing up "Le'Veon for Heisman" t-shirts.)

Other statistical observations from the opener, in boldet form (to coin a term):

Theoretically, you only have to average four yards per play to score a touchdown on every drive. MSU came about as close to doing that as you're likely to see. Despite gaining 20 or more yards on only 6 plays (one of which ended in a turnover), MSU posted 7 drives of 40-plus yards and gained a total of 461 yards. And, despite snapping the ball 88 times (ignoring the two kneel-downs at the end), MSU conceded just 3 TFLs by Boise. The four turnovers obviously limited MSU's scoring output (as did Dantonio's prudent-but-unsatisfying choice not to tack on another 7 points that looked to be there for the taking at the end), but the baseline numbers were quite encouraging.

Win first down and the rest falls into place. Chris covered MSU's first down success on offense quite nicely in his Freep column yesterday:

Bell ran 25 times on first down for 92 yards. He also had two catches for 13 yards. Perhaps most incredible, he only had two first-down touches for negative yardage.

MSU picked up 133 yards on 37 first-down plays for an average of 3.6 yards per play. Almost every time Andrew Maxwell lined up for second down, he was in a favorable distance to-go.

The numbers on defense were even more impressive. MSU held Boise to just 45 yards on 23 first-down plays. That includes 16 rushing yards on 13 first down rushing attempts--and 13 of those 16 yards came on one carry. So far, so good for the post-Worthy front seven. The end result was the Boise offense putting together just one drive of 40-plus yards, which ended in a turnover.

Not surprisingly, winning on first down makes winning on third down that much easier. MSU converted 10 of 19 third-down plays, while Boise converted just 5 of 14. As tweeted by Heck, Maxwell was 8-9 for 104 yards on 3rd and less than 10 yards to go (0-4 with an INT on 3rd and 10+). MSU finished just 10th in the Big Ten last season in offensive third-down conversion percentage, so that's a very promising start.

The "secondary receivers" are actually the receivers. Fourteen of Andrew Maxwell's 22 completions went to non-wide receivers, including 7 to Dion Sims. He'll need to take some cracks deep from time to time to keep defenses honest, but expect to see more of this for a while. The positive spin, meanwhile, on Tony Lippett's performance is that we would all be applauding his 4-catch, 80-plus yard game if he'd caught/held on to the ball like a wide receiver instead of a defensive back. Here's hoping that turns out to be a fairly simple adjustment.

Preliminary offensive line review: mixed, again: The run blocking was obviously very consistent. The pass blocking, not so much. Maxwell faced too many free rushers (zero sacks but 6 QB hurries for Boise) and proceeded to force some bad throws because of it. This is only one data point, but let's hope this season isn't just another seesaw between good pass blocking/bad run blocking and vice versa.

That's how you defend a spread. The vaunted MSU pass defense posted zero sacks and only 2 quarterback hurries, but that was mainly a function of how quickly the Boise offense gets the ball out of the quarterback's hands. The tackle numbers say that everyone on defense did their jobs. Every starter besides Will Gholston (!?) posted at least 2 tackles (with a bonus third DT also making 2), while no individual defender had to make more than 7 (Max Bullough, of course). It's easy to toss around hyperbole after a big win, but the defense really couldn't have played much better than it did (ignoring the next boldet, I guess).

Penalties $&*#^&*$#@$&*)!!! You can live with a certain number of penalties if they signal aggressiveness, but 10 for 90 yards is too many. And they were a teamwide phenomenon. The offense was responsible for 5 penalties for 40 yards, while the defense was responsible for 4 for 35. Mike Sadler had the 10th penalty (for 15 yards); we'll forgive anything where a punter is attempting to make a real football play. No simple solution here outside of FIX IT.

The key play that wasn't: If Dantonio doesn't call timeout on that 4th and 2 and the Boise conversion stands, we could be sitting in a very different spot. Boise getting to the end zone from the 30 wouldn't have been a given, but it would have been a real possibility. Nothing would really have changed in terms of the fundamental performances, but we'd all be lamenting the turnovers much more loudly.

Speaking of good Dantonio decisions: Going for it on 4th and 1 on your own side of the field. Gutsy and statistically defensible! I liked it, I liked it a lot. (Of course, more conservative types would note that MSU only finished the game 1 for 2 on 4th-and-1 attempts.)

Finally, a blog community project: If you had to pick 10 numbers--5 for each team--to best encapsulate a random college football game, what would they be? Can we come close to anything resembling the four factors in basketball, limiting ourselves to metrics that will be fairly intuitive to most fans? Here are the 10 I'd pick (sack-adjusted, of course, although there weren't any sacks in this particular game):