[My goodness, it's gettin' way too wonky up in here.] 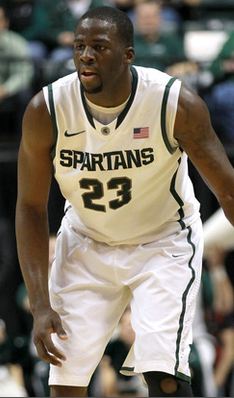 So now we find out that Le'Veon Bell, in addition to being a competitive high school high jumper, also played AAU basketball with Trey Burke and Jared Sullinger in middle school. And he was the point guard, no less!

And that's not all: a review of the game logs for "Green" and "Bell" show that the two purported different athletes have never competed in an official MSU sporting event on the same day. I never took a course in logic, but I'm pretty sure that not disproving a theory is pretty much the same thing as proving the theory.

I hate to have to break news of a potential major NCAA violation by the college athletic program I root for, but the truth cannot be ignored. And I will not back down from this theory until I see a photo of Bell and Green in the same place. And even then, I'll probably stick to the theory. If you've seen any of the Mission Impossible movies, you know what can be done to make someone look like a different person.

We'll provide updates as events warrant, but I'd go ahead and consider this to be the final story.