Michigan State gets a bowl win in appropriate form: close, ugly, and low-scoring (17-16) 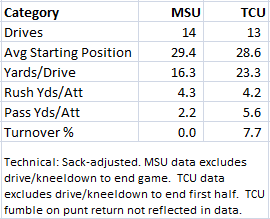 Michigan State overcame almost complete ineptitude in the passing game through a combination of spectacular punting from Mike Sadler (43.7-yard average on 11 punts, including 3 that dropped inside the 20), a nicely-timed punt muff by TCU near its own goalline, and our guy (Isaiah Lewis) hanging on to an interception while their guys didn't.

The team's longest drive in the first half went for just 22 yards, as they fell behind 13-0. In the second half, the universe didn't exactly reverse on its axis, but MSU did put together two scoring drives and put 17 points up on the board.

On offense, it was Le'Veon Bell or bust. Between rushing, catching, and passing the ball, Bell accounted for 187 of MSU's 268 positive yards gained from scrimmage. There's every reason to think Bell will, and should, go pro now. If so, he went out with a suitably versatile and crucial performance for his Spartans.

While his stat line was limited (4-11 for 47 yards and a TD, with at least one major gain offset by a dropped pass; 2 scrambles for 11 yards; one bad sack), the only sustained offensive drives for MSU came with Connor Cook in the game at quarterback. The team gained 142 yards on the 4 drives Cook was in the game for, versus a total of 49 yards on the 10 drives Andrew Maxwell was in for.

Comparing the team's productions with the two QBs in the game suffers from a small sample size issue--but only on one side of the comparison. While many of the offense's issues were beyond his control, Maxwell was just never able to find enough ways to make plays this season. Maybe that changes next year but Cook's ability to extend plays looked very promising, and it's encouraging to hear the coaches plan to open up the quarterback spot to competition going forward.

This win makes MSU 4-5 on the season in games decided by 4 points or fewer. The team's final record of 7-6 accurately reflects what the 2012 MSU football team was--an elite defense paired with a highly dysfunctional offense, making the outcome of any game a coin flip, absent the team being MAC-level or national title game participant-level. The expected value of that arrangement is 7.5 wins.

Going into the next season, the question marks aren't going to change. The defense should be able to pick up right where they left off. After some early difficulties, the defense played well enough without Johnny Adams in this game (helped by some inaccurate throws by Trevone Boykin), with freshman Trae Waynes filling his spot. Losing William Gholston would be a hit, but freshman Shilique Calhoun looks like a more-than-capable replacement there (team-high 2.0 TFLs and a QB hurry). Beyond those two losses, it's a matter of avoiding injuries and finding the right guys to fill the DT spots (with Lawrence Thomas now in the mix). The linebackers and safeties should all be back, as will Marcus Rush and (barring a surprise announcement) Darqueze Dennard.

The offense, on the other hand, is almost certain to lose its most reliable playmaker (Bell) and fairly likely to lose its second most reliable playmaker (Dion Sims). Both the quarterback and running back positions will be wide open. The hope is that the offensive line will be injury-free and much more reliable, with only Chris McDonald graduating and Fou Fonoti and Travis Jackson coming back from injury. As a second hang-your-hat-on-offseason-hope, Aaron Burbridge will be expected to make the sophomore leap to become a game changer at the receiver position.

Sadler will be back, too. And team will have two solid options to replace the totally-redeemed-in-his-final-game Dan Conroy as placekicker in Kevin Muma and Michael Geiger.

Football be weird. At halftime of this game, I could not have been more inconsolable about the state of the team. Now, I can hardly wait for spring practices to start.