Why basketball is hard

Digging into the details on MSU's offense

Share All sharing options for: Why basketball is hard

When we last left off on KJ's Mysteries of the Basketball Universe, we were talking about how getting more shots at the rim is a good thing for your offense. While the fact that two-point jumpers are so inefficient is pretty surprising, the fact that shooting the ball right at the rim is the most efficient form of offense isn't. The question then becomes: How do you get more shots at the rim?

That's the kind of question that neither conventional nor tempo-free stats can tell us much about. But we're starting to get a glimpse of some of the tools the insiders have at their disposal to provide more context on how to structure a basketball offense (or defense) more efficiently. Our favorite enemy blogger, Mr. Burkhardt, has been able to access some of Synergy Sports' detailed scouting-based statistical breakdowns. And the numbers he's posted on specific offensive situations have been interesting.

The two most straightforward ways to get the ball to the rim would seem to be:

But neither of those strategies appear to be as efficient as you might think. Transition offense numbers from mid-December: 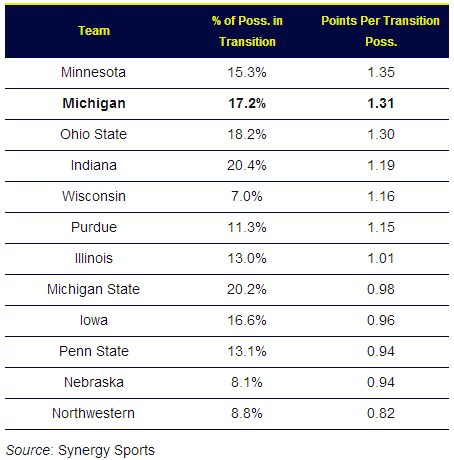 Keep in mind those numbers were posted exclusively against (generally weaker) nonconference opponents. While the numbers for several teams are quite healthy, they include breakaway steals where there's a sure two points at the end. It's not clear that pushing the pace will necessarily be an efficient strategy at the margins--particularly for MSU.

For low post offense, the numbers are even less stratospheric (these are only a week old): 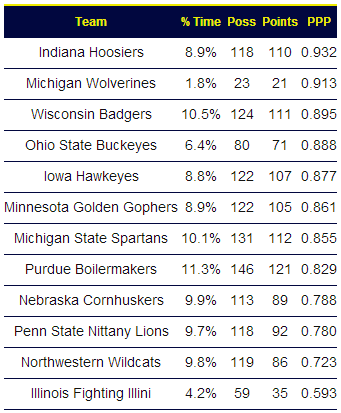 Even a team like Indiana, with an elite offensive center, comes up short of a point per possession when they throw the ball into the post. And MSU ranks only in the middle of the conference pack.

So how do teams get the ball to the rim and score points efficiently in the half-court offense then? Well, here, courtesy of Synergy, is a peak at MSU's efficiency numbers under different offensive situations (extracted prior to the PSU and OSU games): 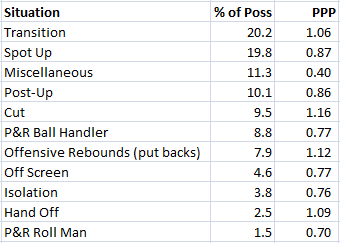 It turns out that the most effective offensive plays are the ones that are the hardest to plan: offensive rebounding (you're not trying to miss the shot, after all) and cutting (which usually happens in reaction to another offensive move and the subsequent defensive adjustment). Basketball is hard. It's not as easy to manufacture the specific result you want as it is in, say, football. Players have to be able to adjust and react.

In terms of generalizing those statements, I've only seen two other sets of this kind of data--for the MSU defense and the UM offense--but they tend to confirm that transition offense, cutting, put backs are the most efficient forms of offense (along with having Trey Burke run the pick and roll--but that's not an option available to everyone).

Going forward, my biggest concern offensively (now that the turnover bug seems to be receding) is rebounding. MSU ranks just 8th in the Big Ten in offensive rebounding percentage during conference play. The lack of depth means that players can't attack the glass with as much abandon due to fatigue and/or concern about picking about fouls. That makes the offensive efficiency calculus that much tougher. (Perplexing on the other end of the court: Allowing opponents to shoot a league-worst 50.5% on two-pointers in conference play. A topic for a whole other post.)

The positive trend is the one that Tim covered last week: the emergence of Adreian Payne as a top-tier offensive threat. Payne actually ranks as MSU's most efficient shooter in all three areas of the court right now. He's making 78% of his shots at the rim, 54% of his two-point attempts away from the rim, and 75% of his three-point attempts (limited sample size on the final category, obviously). If he can continue to transcend the overall limitations of the field goal shooting heat map--and if MSU can find enough ways to keep him involved in the offense throughout the game--he could be a major boost to the team's offensive efficiency down the stretch.

To close, a couple big picture thoughts on the Synergy data: