I always get a little bummed when I hear football teams use the term, 'Basketball on Grass', because nearly all of the time they're still just talking about playing straight-up football. Maybe it's faster (they go up and down the field like a basketball team! I guess...), maybe it's higher scoring (basketball scores, that's sort of like basketball!), maybe the team is just at a basketball school and is trying to trick its students and alumni into attending games (I SEE YOU JOE TILLER).
Where's the tomahawk jams, the hook shots, the offensive rebounds?

Damn you oblong-ball, show me something truly of the round-ball persuasion!

Well, no tomahawk jams here either, but this play does borrow a small move that is much more commonly found on the basketball court than the football field: The pick.

Wait, isn't the pick play that one where Roushar sent the fullback deep down-field into triple coverage off play-action?

You mean the one where the scrappy, unskilled, player with the elbows made of razorblades steps into your blind spot and tries to meld his jersey's sweat stains with your face? Uh, no thanks.

No! Wait! Don't close your browsers! It's not as lame as it sounds!

Do you like passing routes that show flexibility against both common man and zone coverages and have found an unorthodox way to put your best players into open spaces?

Chris Brown of Smart Football does a really good job quickly explicating the basics of this play, so I'll let him talk:

No play is more synonymous with the Air Raid than the "mesh" concept, which was directly taken from the old BYU offense. The name of the play refers to the two receivers, Y and X, who run shallow crosses in opposite directions. The rule is that the Y "sets the depth of the mesh," meaning he works to about six yards deep, while it is X’s job to come directly underneath him — in practice they begin by touching hands as they run by — to ensure there is no space between them. It is, at core, a "rub" route, known more derisively by defensive players and coaches as a "pick" play. It’s not illegal because the receivers do not actually seek to pick defenders but instead simply get on their paths and run by each other, forcing defenders to go around them.

Wait, but you said this was based off the 'pick', and that excerpt says that's not allowed.

Right. And, like he says, it's not. But this isn't a pick like how Draymond Green used to set picks at the top of the key, with a teeth chattering bump to an unsuspecting defender. Instead, it puts the offensive players in the general area of their opposite defender, and puts the defenders in the general area of each other, and then as can happen with basketball pick, sometimes someone gets lost or is just a step behind leaving one of the players open.

So if it isn't a real pick than this isn't basketball on grass either. Didn't you say at the start-

What does Mesh do against zone coverages?

I think it's less ideal to call vs zone coverage than vs man coverage because that aforementioned 'chase' responsibility when combined with the mesh point and the other receiver's clearouts is how you are going to get big plays off mesh.

But it still has it's advantages. The key trick involves forcing defense's to properly cinch, switch, and re-stretch on two wide receivers simultaneously passing through the same intersection of your underneath zones.

PSU sends a linebacker blitzing up the middle along with its four linemen. The underneath zones are being handled by two linebackers and a cornerback. 'Mesh' is meant to attack those linebackers coverage responsibilities. 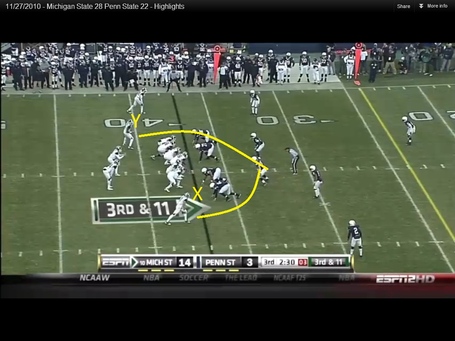 Linthicum is the 'Y' receiver, again, the guy who sets the 'pick' and Nichol is the 'X' receiver who is, in theory, using the pick. 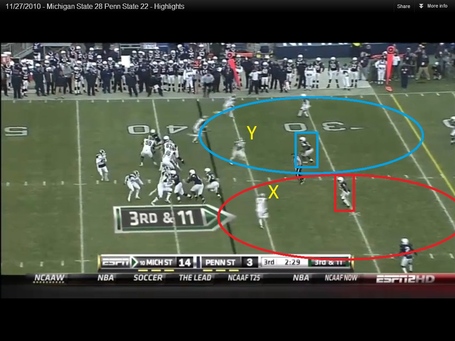 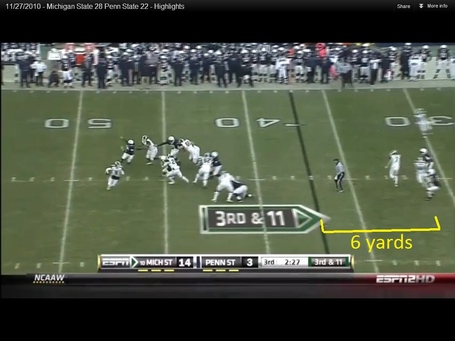 Note that Linthicum's route is almost perfect at getting the 'rule of thumb' 6 yards deep. Because both linebackers have chosen to play this deep, and because neither is following a specific receiver, there's little 'rub'. But even without the pick, it's worth noting that the crossing action of the two receivers is still going to put significant pressure on this underneath zone. This is the cinch action.

It's also important to see that Cousins is starting to feel some heat, both from the blitzer up the middle and off left tackle. 'Mesh' takes a good bit of time to develop, leading to some Air Raid coaches to take it out of their playbooks in favor of 'faster' plays. 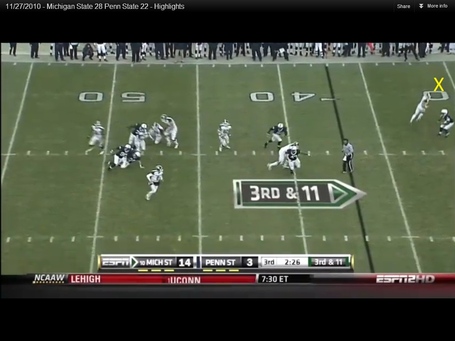 Cousins wisely buys the extra time the route needs, by escaping the pocket, making sure to keep his eyes down field. PSU's (visible) coverage is pretty good at this point and throwing across his body to Nichol on the run would be a pretty dangerous decision for Cousins. It looks like the LBs have properly switched. Luckily, out of frame, Linthicum is being smart. 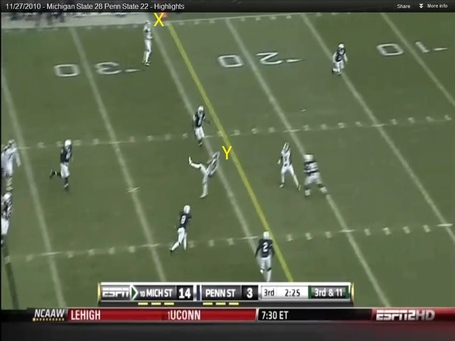 Knowing that 'mesh' is a horizontal stretch on the linebackers, the middle linebacker is being forced to shade Linthicum to the outside, lest he be able to catch the ball and run towards open field at the bottom of the screen. But in addition to this horizontal pressure, the threat of Cousins' scrambling has added a vertical threat to the linebacker's responsibility. Now he has to move left to stay ahead of Linthicum and is pulled forward to contain the QB run.

Linthicum, noticing this, simply breaks off his route and turns down-field, essentially the opposite of how the linebacker is being pulled. With one linebacker stretched left and the other right, this wide space in the open field allows Linthicum time not only to make a tough catch but to stumble forward for the first down. The middle linebacker failed his re-stretch (in large part as a result of the pass rushers losing contain on the QB, it's worth mentioning).

Converting the tough third down, on the next play Cousins hooks up with Cunningham for a 24 yard TD pass to bring the score to 21-3.

What does it do vs man to man coverages?

Most of your big plays from 'mesh' will come when the defense is in man coverage, as it best utilizes the 'pick' and 'chase' aspects of the route combo, allowing your wide receiver to gain separation before the ball gets into their hands.

A defender is forced to run through a thicket of friendly and unfriendly bodies and if any of them gets in his way that can mean enough space has been conceded to give up a big play.

Here's a very good example from the 2011 BTCCG.

MSU comes out in a five wide setup, with Le'Veon Bell split out at the top of the screen. This forces a Wisconsin safety to run up to cover him. 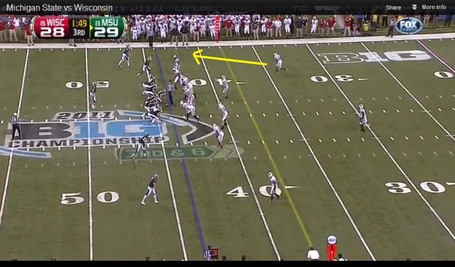 This tells MSU that Wisconsin is probably in man coverage. Kirk Cousins does some Payton Manning pointing shit and motions Bell into the backfield. 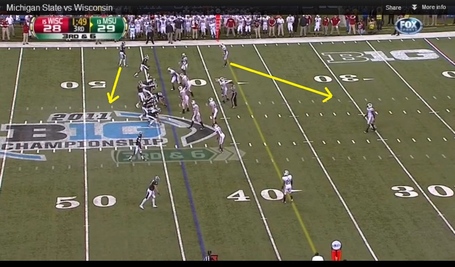 The safety returns to where he was. Again, really likely Wisconsin is man-to-man. 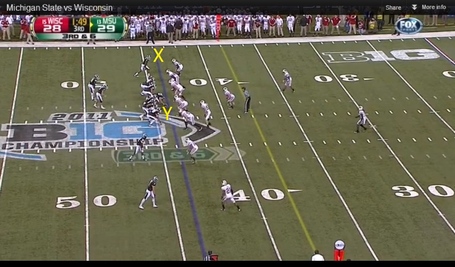 Linthicum again is 'Y', the pick man, B.J. Cunningham is 'X', the primary receiver this play is meant to get loose. 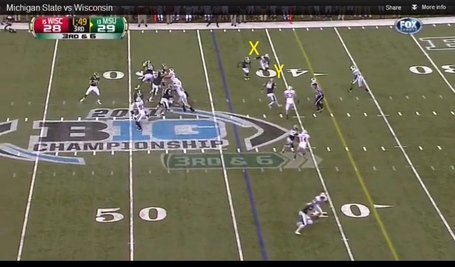 Linthicum and Cunningham seem to be setting a shorter mesh point here. 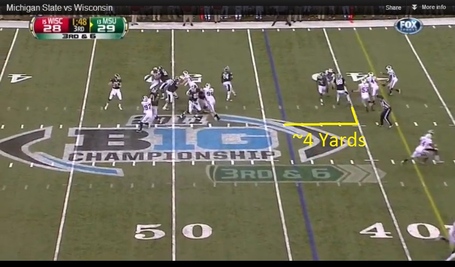 Four yards is the pick instead of six. Why? Well, I think it's because A. the down and distance for the 1st down is shorter, and with 'mesh' you typically want to let your receiver run for their yardage and B. it gets the ball out of the QB's hands quicker.

Linthicum is going to get in this cornerback's way just enough to give Cunningham a couple of steps. He's also attracted the attention of three other Badgers, two of whom seem to be heavily overpursuing. Excellent work by him/bad work by the Wisconsin defense. Note Bell sneaking out of the backfield. 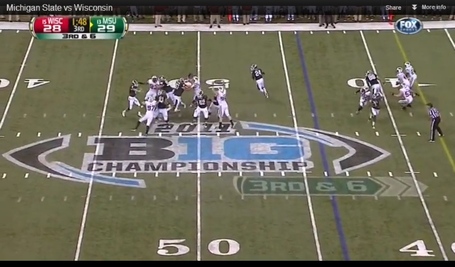 With the pass rush coming would Maxwell have checked down to Bell here? Man, it feels like he would have, doesn't it?

At any rate, Cunningham is breaking open and the ball is on its way. Wisconsin's defenders are all chasing here. #53 in particular is just totally blowing it. 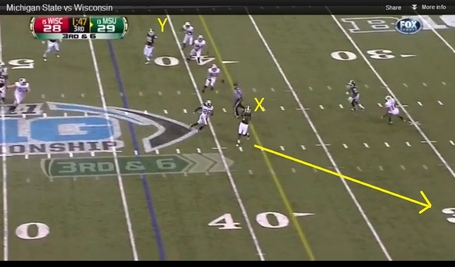 Cunningham gets the ball in stride and there a lot of open field in front of him. Martin at the right of the screen has done a very good job clearing out and turning around one of the safeties. 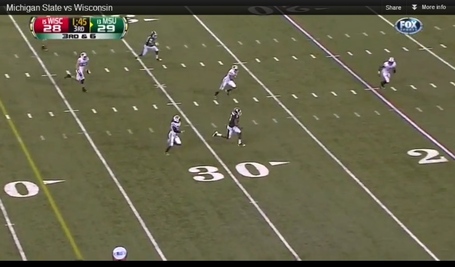 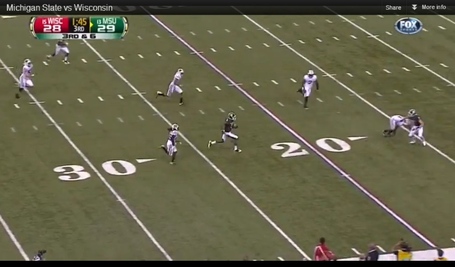 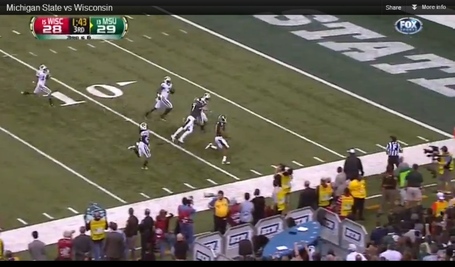 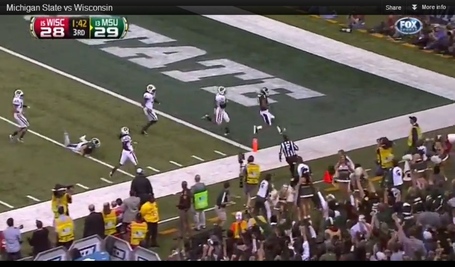 Touchdown. After this score of course, Wisconsin-

MEMORY IS BEING DUMPED TO BACK-UP DRIVE

COMPUTER IS RESETTING IN 5

Oh man, my head feels funny. Where were we again? Oh, right.

'Mesh' is a core passing play for MSU, that, while a bit slow to develop, offers a simple throw and catch for the offense that still puts an effective strain on both common man and zone coverages.

Because it is heavily dependent on timing, it's best for your receivers and quarterback to have that sort of 'mental link' that most good QB-WR partnerships seem to have. This caused some trouble when MSU tried to run 'mesh' this year, as we will look at in a post tomorrow (something that I've wisely already written and is ready to go, because every time I say I'm gonna write something on the basis that I'm someone who is motivated and focused I never ever write it because LOLOLOL who knows, so that's scheduled to go up tomorrow).
--

Other "Better Know A..." posts