Author's note: Might want to read this first. Or not. Whatever.

Sooo, it turned out the kicking game was really easy to kind of break down by the numbers and the rest of the stuff was way less easy, or at least less satisfying by the numbers, so I'm going to try to dig more into the film side of it.

The Andrew Maxwell 'Short Of The Sticks' Experience was a real and real annoying problem with the MSU passing offense sustaining drives. How in the #@%^! did it keep happening again and again? Well, one symptom was jams.

So, let's first clear up some of the mess surrounding what defenders are and aren't allowed to do. Part of the problem is that the NFL and college rules are different, creating confusion between crossover audiences.

As far as I know, as long as the ball is still in the QB's hands, if you want to shove a receiver around, you can do so, no matter where you are on the playing field (i.e., there's no 'within five yards of the line of scrimmage' rule). You still can't hold or grab jerseys (this is the difference between pass interference, when the ball has left the QB's hands, and defensive holding or illegal hands, when it hasn't), but you can push and bump quite a bit, especially early on in a play, or closer to the line of scrimmage (even though there no restricted area, it seems that the further down-field you are as a defensive back, the harder it is for the ref to determine whether or not the QB has thrown the ball already and the more 'serious' your contact looks in interfering with the receiver, leading to more flags).

These looser college rules can allow a defense to jam, press, and shove fairly aggressively if they are good enough to cover for one another and take advantage of the contact. You can have your cornerbacks play aggressive man to man coverage, not letting receivers get clean releases off the line, but it doesn't really mean a damn if they're blowing past you for 40 yard touchdowns after the initial bump, because your cornerback got caught a step behind and the safety was late in helping over the top.

But among the best defenses in college football, you'll find that aggressive jamming of receivers, to disrupt timing and mess up passing routes is a common trait. Alabama does it, Michigan State does it, as does TCU. 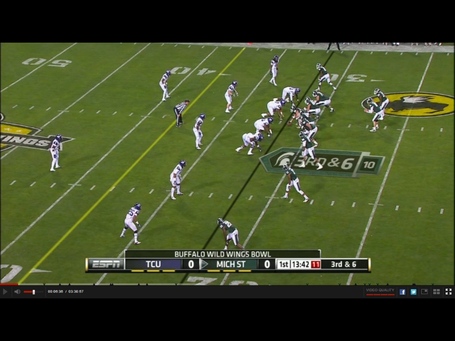 TCU is in their 4-2-5, with 2 high safeties about ten yards deep, and a line of five defenders over their front four. They don't blitz here, dropping seven into man coverage. 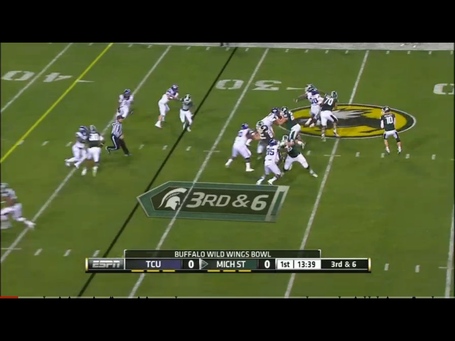 MSU runs 'mesh' with Burbridge and Sims. The mesh point is (supposed) to be about 3 yards past the line of scrimmage. Everyone else is in one on one coverage, Caper is sneaking out of the backfield at the top of the screen.

As Burbridge is running about a yard deep towards the mesh though, the linebacker jams, well, shoves really, him back towards the line of scrimmage. 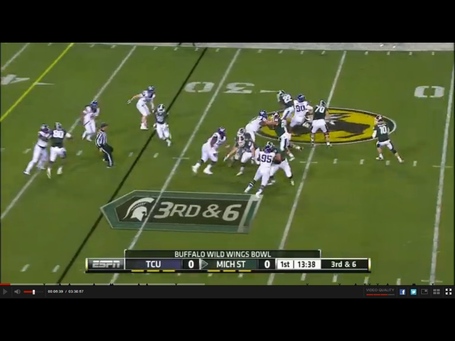 And man, Burbridge just doesn't deal with that very well at all. He's now a yard behind the line of scrimmage and instead of the TCU cornerback #2 running right into a brutal Dion Sims/clueless referee wall he strolls right through the space between Sims and the ref. For what is worth, Sims is likewise being jammed pretty good by TCUs other linebacker.

The 'mesh' component of this play is brokety-broke, but the pass protection is still holding up pretty well (I know in the next still image it looks like heat is coming off both the edges of the pocket, but the tackles handle these outside moves pretty well, the QB wasn't under real pressure when he threw. I still think Maxwell had at least another second or two, maybe more if he would try to step up or escape the pocket). Maxwell would have to bonkers to stick with Burbridge, his primary read here, right? 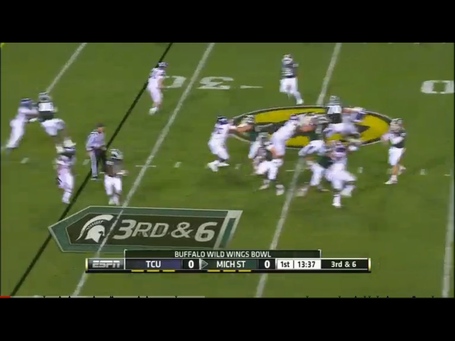 Welp, here he is throwing to #16. Now Burbridge's momentum has him two yards behind the line of scrimmage and his defender is right by him and closing fast. The linebacker who jammed Burbridge is now covering Caper, the actual 'easy, behind the LOS, bailout route' here. Sims is still in one on one coverage with his linebacker as well. 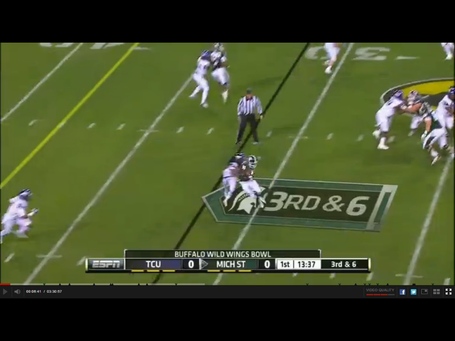 You won't believe this, but this play ends with Burbridge getting wrapped up for a 1 yard loss and MSU is forced to punt.

*Sighs* Well, who's to blame here?

Ahaha, where to start. Well, let's get this out of the way first, TCU's pass defense was excellent, they were fast, made plays on the ball, and were well-prepared. So that's part of it.

Maybe I'm grading them on a curve because I got so used to seeing them break down, but they're pretty good here. Yes, they're getting blown back off the line of scrimmage but A. it's pass protection so the 'false retreat' is kinda built it, particularly in shotgun, and B. no one is really getting through.

5 v. 4 it'd be nice to see someone get pancaked, and MSU doesn't seem to be utilizing their extra man all that well (Jack Allen, the left guard, is just hanging out at the end of the play), but four seconds or so of good pass pro is like, C+ production out of this particular offensive line.

So, alright. three out of the five routes not getting past (or close, really) to the first down marker is gonna make some folk's heads explode. But Caper's route is a pretty standard delay out of the backfield in case TCU didn't blitz. And as I spent a bunch of words on earlier, 'mesh' is a play with a ton of pedigree that's functionally designed to generate a handful of measly yards of after the catch, so I can't get too crazy about that either.

The two routes at the bottom of the screen, (that go off screen before we see exactly what they're doing, THANKS ESPN) it's worth noting, sure seem to be going past the marker to me (more on this later).

Moreover, with TCU's two high safeties, you're technically 'five on five' in the area from the line of scrimmage to like, 7 yards out or so, pretty good for the offense in this situation.

For what it's worth, TCU seems to be well scouted on this play. Maybe Fowler, a bigger, older, WR would be the smarter choice as the 'X' guy in mesh given what happens on this play but Burbridge is probably the most dynamic guy with the ball in his hands, so I see the logic there too. Can't hate the call, even if this game made me hate the caller at points (mostly at halftime as I reflected on that horror show of a first half).

I think I'm willing to give Sims a decent pass here, as he gets to his spot, fights well through contact from the LB and seems to establish inside position after the failed mesh, even if he isn't fast enough to break away from his defender completely. On the other hand, once Burbridge gets submarined, Sims probably needs to break off this route and fight his way up field or curl around or something get some daylight from this defender.

Aaron Burbridge. So, he's a freshman, and he hasn't had the weight room time he needs, and he still only weighs 190 pounds while the dude jamming him is 220, etc. etc. But still...

IT'S JUST A PUSH I NEED YOU TO BE MEGASTRONGER HERE BRO. CAN'T BE GETTING HURLED TWO YARDS BEHIND THE LINE OF SCRIMMAGE ON THIS ROUTE BROBROBRO.

Time in the weight room, maybe just the experience of getting craftier to avoid/blunt the force of LB jams like this on crossing routes will fix this. This stuff should come in time as a true freshman matures mentally and physically, but man, I can't emphasize enough how bad he gets abused on this play.

No willingness to look towards a second option

So, maybe the two mystery receivers in this play were open, maybe they weren't. But as far as I can tell they didn't get looked towards, so who cares if they were or weren't.

Caper was even further behind the LOS than Burbridge, but at least had some four yards or so of space between him and his defender to work with. No look towards him either

Sims was covered, but covered by a linebacker, and you've got to like Dion Sims 1-on-1 with a LB in this sort of situation. Maybe he can break a tackle/break free for a first down or maybe he can't, but probably get you some positive yardage. He doesn't get a look from Maxwell.

Even throwing the ball out of bounds would've probably been a better decision than throwing to Burbridge here.

I recognize that playing quarterback is incredibly hard and being like, "C'mon just scan through all five of your reads dawg, I do it in NCAA." is ignorant, stupid advice. But way too often Maxwell is locked onto someone from start to finish on a play and when the defense throws a monkey wrench into it stuff like this happens. You don't have to go through four reads, but there has to be some adjustment to maybe get to one of those second options even if they're also not open, I mean it also seems on this play that he's...

not willing to buy some time

I sympathize, pass protection was pretty bad this year. And when Maxwell did escape pressure, receivers often couldn't get open anyways. But a QB still has to keep doing it when stuck with an offense like MSU's this year.

Maybe he just really didn't want to take a sack (and he was a big upgrade over Cousins in the 'taking awful sacks' category, so maybe I'm just trying to have it both ways). But the 'Pressure Warning System' seemed to be on too fine a hair trigger for Maxwell. This lead to him getting rid of the ball too early far too many times, so that even though he didn't take many sacks he threw away a lot of possibilities.

It's a lazy and speculative to dive deep into a QBs mental state when things like this happen, so I will just say what I can see: Maxwell seemed to get rid of the ball quicker, too quick, as the year went on.

How could/should everyone have handled it?

Well, you only have to go back a year. 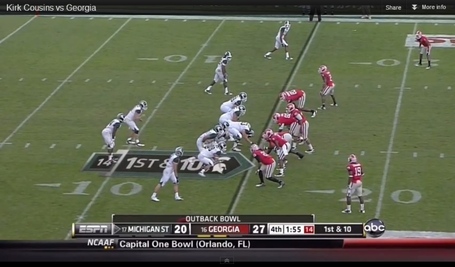 Very similar situation. MSU is in a similar formation. Georgia is only rushing it's DL (though that's 3 rushers and not 4). MSU is running 'mesh' and Georgia is going to jam and reroute.

Cunningham and Nichol are running the mesh, Georgia is also using three defenders to cover them. 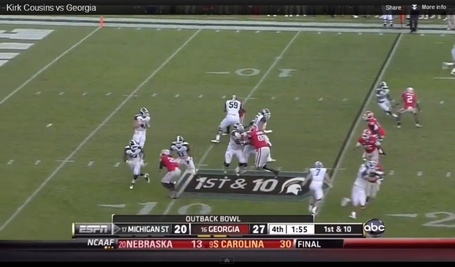 Cunningham gets pushed by the Georgia corner but basically keeps his position and then bumped by the mlb and still stays above the LOS. 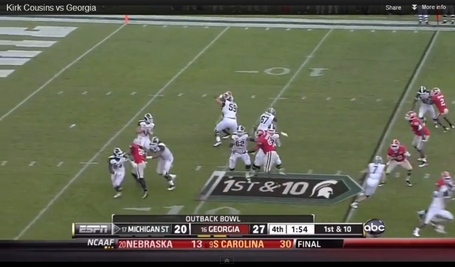 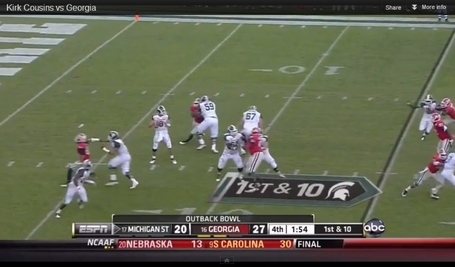 Cousins takes another small step in and fires- 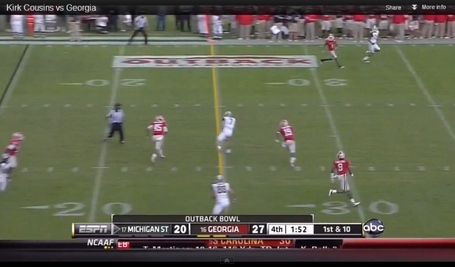 Giving Nichol enough time to find some space for a first down.

Is that a perfect comparison?

No. Of course not. It's probably an unfair comparison. After all, Maxwell is a first year starter, Cousins was a third year starter. Sims is a junior tight end, Nichol was a senior receiver. Cunningham was a senior, Burbridge just a freshman. There was an extra pass rusher vs Maxwell. So no, not fair, but still like, an observable problem.

This is a single difference between a experienced offense and a inexperienced offense. The little things that go into the execution of this play are what we all hope can be worked on and fixed this off-season by the coaches and players to make 'mesh' and other plays as good as they were in year's past.