So far, so good for the MSU basketball team, even if they're winning in untraditional ways

If you'd told me going into this season that (1) a member of the main playing rotation would transfer out of the program midseason, (2) one of the team captains would be a complete bust on the court, and (3) neither of the back-up big men would look trustworthy for more than a couple minutes of PT at a time, I'd have told you . . . well, I'd have told you not to start saving your spare change to buy a Big Ten championship t-shirt.

As it is, I still think we're at least one more win against a top-tier contender away from declaring the team conference title contenders, but it's certainly within the realm of possibilities. The team's 6-2 conference record (and, for that matter, 17-4 overall record) is more than acceptable all things considered.

The individual game results haven't been that shocking--two road losses to ranked teams, two close, grind-it-out wins against other top competition, and four good-but-not-great performances against everyone else--but the overall statistical trends have been outside the bounds of MSU's historical norms.

In particular, the lack of depth exhibited by the team has been extreme. My working theory has been that depth is a prerequisite for success under a Tom Izzo regime. Thus far in conference play, however, Izzo has used his bench no more than is absolutely necessary. Here are conference-only depth ratio numbers since 2001. (We've always used full-season numbers in the past, but those numbers are goofed up this year by the Kearney transfer and the Trice injury.) 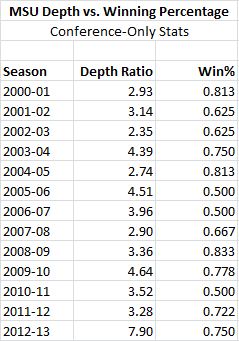 Because the denominator of depth ratio is the minutes played by the eighth and ninth guys in the rotation, you only get a number as big as 7.90 if you're basically playing a seven-man rotation. Through the first eight games of conference play, the starters are all averaging 25 to 34 minutes per game. Travis Trice (23 minutes) and Denzel Valentine (19 minutes) are getting healthy doses of minutes. And that's it. Alex Gauna, as the eight player in the rotation, is averaging less than 6 minutes per game.

This is a younger (#286 nationally in KenPom's experience measure), more athletic, and more aggressive MSU basketball team than we're used to seeing. That means they're more undisciplined than we'd like at times, but also that they're potentially more explosive.

Overall, MSU's statistical profile in conference play is pretty middle-of-the-road. They rank fourth in the league in offensive efficiency and fifth in defensive efficiency. This is not a dominant team. The question is whether that's mainly a function of (1) good fortune (e.g. poor free throw shooting by opponents) that's going to wane as conference play proceeds or (2) a team relying heavily on its starters, who are good enough to turn it on when they need to but can't dominate a game for a full 40 minutes. (And the schedule isn't going to do us any favors down the stretch. Six of the team's ten remaining regular season games are against KenPom top-15 opponents.)

I continue to worry the lack of depth is going to cost the team some games (Keith Appling's foul trouble against IU certainly didn't help), but so far it hasn't been as big a hindrance as I would have predicted. This hasn't been a traditional Tom Izzo team, but it's been an entertaining one. For my part, I'd say it's time to abandon my rigid analytical framework and enjoy the ride.

(HT to Con-T for bouncing this topic back and forth with me.)